Justification and the Gospel

Understanding the Contexts and Controversies 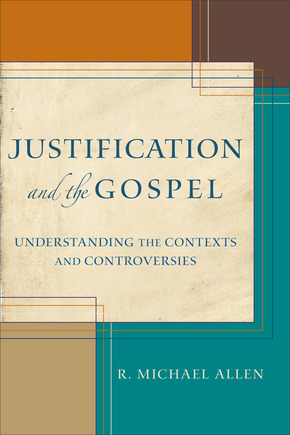 Seeking to move beyond current heated debates on justification, this accessible introduction offers a fresh, alternative approach to a central theological topic. Michael Allen locates justification within the wider context of the gospel, allowing for more thoughtful engagement with the Bible, historical theology, and the life of the church. Allen considers some of the liveliest recent debates as well as some overlooked connections within the wider orbit of Christian theology. He provides a historically informed, ecumenically minded defense of orthodox theology, analyzing what must be maintained and what should be reconfigured from the vantage point of systematic theology. The book exemplifies the practice of theological interpretation of Scripture and demonstrates justification's relevance for ongoing issues of faith and practice.

"Justification and the Gospel is theology at its best: disciplined by the instruction of Scripture, attentive to the traditions of Christian thought and practice, filled with discriminating judgments, and eager to explain and commend the gospel of justification."

"Michael Allen provides here a first-rate study of the doctrine of justification construed in the context of Christian theology as a whole. His review of contemporary debates and his awareness of biblical and historical sources are alike impressive. This is a book that challenges and provokes as well as informs."

"In this important and lively book, R. Michael Allen broadens and deepens contemporary reflection on the doctrine of justification. Allen provides a dogmatic account of justification, attentive to how it relates to other topics in Christian doctrine--including the divine attributes, Trinity, Christology, the church, and the place of participation in God in salvation. In the process, Allen shows how historic catholic and Reformation sources can illuminate a biblical doctrine of justification, moving beyond the caricatures of pre-Enlightenment theologians that have become common in recent debates. Justification and the Gospel is a valuable work that will enlighten, provoke, and edify."

"In this extremely learned book, Michael Allen performs a dual service for Christian theology. First, by applying the lens of dogmatic analysis to a topic largely dominated by exegetical and ecumenical concern in recent decades, he exposes the shortsightedness of many contemporary approaches and debates and enables us to perceive a more capacious domain of possibilities. Second, by means of compelling argument and well-chosen examples, he demonstrates that historic Protestant teaching regarding God's gracious justification of the ungodly retains its status as a hinge upon which many doctrines turn and a wellspring of theological and spiritual vitality."

"With a keen eye and deft hand Allen plunges into the ever-changing discussion of the biblical teaching on God's justification of sinners, practicing a truly inter-subdisciplinary examination that draws upon exegetical, historical, and dogmatic studies, addressing contemporary cultures and the life of the church with his insights. Agree or disagree, readers will be challenged to address 'forensic' and 'participatory' views of justification from perspectives gathered from Allen's own Reformed tradition as well as from Luther and a variety of historic and contemporary Lutheran and Roman Catholic theologians. This volume will fire fresh exchanges regarding the nature of the gospel and the definition and application of God's justifying action in Christ Jesus."

"When dealing with the explosive topic of justification, fair-minded communication and understanding between theologians, biblical scholars, historians, and practitioners are often hard to find. How rare it can be to find a theologian who not only appreciates the vital significance of justification but also carefully avoids falling into the trap of reducing everything to justification. Allen's study is logically sound, biblically informed, theologically nuanced, and relevant for the life of the church. Amid ongoing debates, we need this book."

"The new debate on justification is getting interesting! Allen provides a lucid scholarly guide to the controversies. He intervenes in the debate on behalf of divine immutability and forensic imputation. He sides with the rendering of the genitive of Galatians 2:20 as the faith/faithfulness of Christ to indicate the Christological ground of the sinner's justification. How little the classic fault lines still apply! How much less can the matter of justification be regarded as passe."

"This book has a number of perceptible strengths, not the least is its robust exposition of the Reformed tradition on justification, while engaging in wider thinkers from Augustine to Aquinas to Barth. . . . A very competent and noteworthy contribution to the discussion on the theological meaning of justification. . . . A leading exposition of the doctrine for modern evangelical and reformed readers."

"A chief strength of this work is Allen's thorough elucidation of the doctrine of justification from a theological standpoint and not simply from an ecumenical or biblical studies approach. . . . Allen has written an engaging and lucid defense of the traditional Protestant doctrine of justification without mere repristination, and has provided a necessary corrective to the reductionist approaches for understanding justification today."

"Drawing on theologians from differing eras and (largely Western) perspectives, Allen's positions are always well articulated and offer a very helpful foray into old and new questions of soteriology. Perhaps his most significant contribution is his direct attention to debates in Pauline studies, where exegesis is not infrequently buttressed or even grounded by dogmatic slogans but often without sustained dogmatic reasoning. Whether ultimately persuaded or not, students of Pauline soteriology ignore Allen's book to their own disadvantage."

"Allen presents helpful clarifications regarding the traditional Protestant doctrine of justification throughout the work. He eliminates numerous caricatures and inaccurate claims regarding the theology of the Reformers, and he serves as a fair-minded referee in the pistis Christou debate, calling theological fouls on both sides. . . .Even those who disagree with his construal will benefit from this lucid exposition of traditional Protestant theology. Allen has skillfully demonstrated that the classic Protestant doctrine of justification has more life left in it than some modern critics would have us believe."

"Despite its comparatively slim size at under 200 pages, R. Michael Allen's Justification and the Gospel is surely to occupy a heavyweight's place in contemporary dogmatic accounts of justification. . . . In making his case, Allen demonstrates contemporary theology at its very best as he combines theological reasoning and exegesis, the close reading of texts, and concern for the clarity of the gospel in order to demonstrate that justification simply cannot be understood adequately in abstraction from its broader dogmatic context. . . . Justification and the Gospel comes highly recommended as a contemporary, relevant, and important treatment of a central dogmatic concern."