Jesus Have I Loved, but Paul?

A Narrative Approach to the Problem of Pauline Christianity 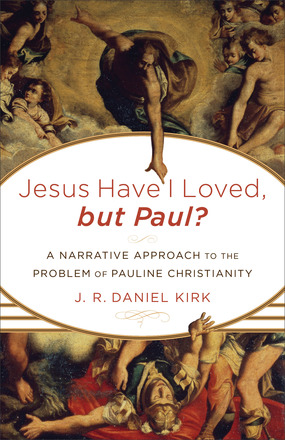 "If a book about Jesus and Paul could ever be a page-turner, this is that book. If we listen to Kirk's wise counsel, we will become more faithful communities of the cross-shaped, life-giving gospel."--Michael J. Gorman, The Ecumenical Institute of Theology, St. Mary's Seminary & University

Students of the Bible are often drawn to Jesus's message and ministry, but they are not always as positively inclined toward Paul. In this volume, Pauline scholar J. R. Daniel Kirk offers a fresh and timely engagement of the debated relationship between Paul's writings and the portrait of Jesus contained in the Gospels. He integrates the messages of Jesus and Paul both with one another and with the Old Testament, demonstrating the continuity that exists between these two foundational figures. After laying out the narrative contours of the Christian life, Kirk provides fresh perspective on challenging issues facing the contemporary world, from environmental concerns to social justice to homosexuality. College and seminary students in New Testament and Pauline studies courses, pastors, and church leaders will value this work.
Contents
Introduction
1. Jesus Stories in the Gospels and Paul
2. New Creation and the Kingdom of God
3. Christianity as Community
4. Living Out the Jesus Narrative
5. Judgment and Inclusion
6. Women in the Story of God
7. Liberty and Justice for All?
8. Sex in the Plot of God's Stories
9. Homosexuality under the Reign of Christ
10. Living Interpretations
Indexes

"If a book about Jesus and Paul could ever be a page-turner, this is that book. Daniel Kirk invites us to learn from Paul as a faithful interpreter of Jesus, dispelling frequent misinterpretations of both the Lord and his apostle. As Kirk himself says, the heart of this volume is the claim that both Jesus and Paul tell the story of Israel's God as a narrative that includes you, me, and the whole created order. If we listen to his wise counsel, we will become more faithful communities of the cross-shaped, life-giving gospel."

"The day I started this book, a friend said to me, 'I can't stand the apostle Paul.' Now that I have finished the book, I couldn't be more eager to give it to her as well as to many others I know. For a book to wed careful New Testament study with clear and challenging pastoral application makes it noteworthy. What makes this book exceptional is that Kirk goes far beyond even this. He addresses a complex and commonly felt set of controversies about Jesus, Paul, women, sexuality, and homosexuality and does so in particularly careful, unflinching ways. He earns the reader's trust by demonstrating an interpretive manner that both honors Scripture and wrestles with it. Any opinionated reader sure about Jesus or Paul needs to listen again and will find this book to be a gift that speaks to the academy, to the church, and to those far beyond the walls of both."

"The perceived tensions between the presentation of the life and message of Jesus contained in the Gospels and Paul's account of that message are well documented and have been the subject of much historical and theological wrestling. In this volume, Daniel Kirk outlines a narrative approach to Pauline Christianity that deconstructs some common and problematic assumptions as well as presents a compelling vision of Paul's gospel that is in deep continuity with the message of Jesus. In so doing, he renders a Paul who speaks powerfully to the church of the twenty-first century and the world to which it is called to bear witness."

"This is a fine, fine, book, award-winning, if you ask me. You want a storied gospel, shaped by a view of Jesus' coming Kingdom? Then you'll want a narrative understanding of Paul, too. Some scholars perceive a tension between Jesus and Paul, and this book puts that to rest, but yet continues to press the need for seeing Paul in his place as architect of the storytelling of the meaning of Jesus for the early church."--Byron Borger, heartsandmindsbooks.com

"[This book] may very well be a touchstone for the next generation of Christians who can't accept the traditional Paul (on historical grounds) and yet who want to explore what Paul looks like if we begin with a more accurate understanding of Jesus, of Judaism, of the Bible's Story . . . and of Paul himself."--Scot McKnight, Jesus Creed blog

"Someone gave Daniel Kirk a difficult task. It is no small feat to trace the lines of continuity between Jesus and Paul, let alone do so in such a manner that re-kindles interest in Paul for contemporary Christians who, though largely inspired by the compassion and inclusion of Jesus, struggle to appreciate the fiery apostle to the gentiles. To that end, Kirk largely succeeds. Readers of Kirk's book will find ample evidence that the Paul of the New Testament bears more resemblance to Jesus than the hard-hearted rule monger with [whom] many of us grew up. . . . Kirk has done a great service in recasting Paul as the apostle of the crucified messiah for those of us who may have struggled to see why Paul should matter for discipleship to Jesus."--Christian Amondson, Englewood Review of Books

"The admirable and important goal of this study is to bridge the divide some Christians find between Jesus and Paul. . . . [Kirk] demonstrates that such a supposed divide does not do justice either to the gospels' portrayal of Jesus or to Paul and his letters. . . . Kirk writes from an explicitly Evangelical background and vocabulary but Catholic readers will benefit, too, from his thoughtful approach."--Donald Senior, CP, The Bible Today

"Much of the study is, effectively, a biblical theology, a timely and helpful reaffirmation of the flow of salvation history, presented in a very engaging style. A goodly portion of the book thus serves as handy compendium of biblical theology and is eminently quotable in numerous instances. Kirk rightly stresses that the NT story transcends individual salvation to encompass the restoration of the cosmos. . . . The stress on Christianity as a community is well-articulated and eminently practical. . . . The book is replete with . . . insights and encouragements for believers to walk in a manner consistent with their calling. Not least, Kirk's courageous stance on 'the obedience of faith' in Paul's letters is to be commended in the highest terms. . . . This is a book well-worth weighing in numerous regards."--Don Garlington, Bulletin for Biblical Research

"The book regularly delivers . . . fodder for lively classroom discussions. It is a winsome example of a new generation of evangelical scholarship that understands itself as a critical participant in postmodern culture and less occupied with matters of dogmatics or historical apologetics. College and seminary professors should consider this well-written volume for courses on Paul or NT theology. . . . The narrative approach introduces students to an important methodological advance in NT studies."--Kent L. Yinger, Journal of the Evangelical Theological Society

"At the heart of [Kirk's] argument is the belief that the Pauline narrative sees itself as part of the larger narrative, enveloping Israel, Jesus, and the entire cosmos. Whereas this argument is not new, this book seeks to place this argument in broader conversation in society at large, questioning held assumptions about both Jesus, Paul, and what they said. Kirk's straightforward language enables the reader to explore these concepts unencumbered by the weight of technical jargon. . . . Placing Jesus and Paul into conversation is a laudable goal. . . . Kirk successfully opens the conversation between not only Jesus and Paul but between the reader and these two as well, opening the door for readers to reencounter Paul as a conversation partner in our lives of faith."--Mandy Brobst-Renaud, Word & World

"Kirk's excellent new book . . . demonstrat[es] that Paul's gospel is in direct continuity with the preaching of Jesus. . . . This book is great for anyone looking for a good workout in the Gospels and Paul. But beyond that, Kirk's clear-eyed vision of the hope-generating and heart-igniting realities of God's comprehensive salvific work and his ability to articulate them compellingly make this a 'must-read.'"--Timothy Gombis, Southeastern Theological Review

"A thoroughly engaging read, well argued and grounded in Kirk's New Testament scholarship. He seeks to be faithful to the NT scriptures but at the same time wrestles carefully and sensitively with them in respect to thorny issues such as homosexuality and the participation of women in Christian leadership. In doing so, he demonstrates the strength of the narrative approach to interpreting Scripture that he is advocating."--Gary W. Burnett, Journal for the Study of the New Testament

"Kirk accomplishes his goal of unifying the Gospels and Paul within a wider narrative framework of salvation history. He writes a volume that makes an academic debate accessible to a popular audience. . . . For those looking for an articulate answer to a vexing question of NT studies, this volume is great in affirming theological unity of the NT."--Carl N. Toney, Stone-Campbell Journal

"Inviting readers to appreciate Paul as a 'challenging and theologically generative' follower of Jesus, Kirk's volume serves as a handbook for holistic theological engagement. . . . With readable prose and connections to music, literature, and film, Kirk offers an exemplary text for undergraduates or beginning seminarians. . . . Those from Reformed, individualistic, and biblicist backgrounds will resonate most easily with Kirk's presentation, but the book can challenge all students to think about their faith more broadly, and, therefore, equip them for living into the grandness of God's story."--Amy L. B. Peeler, Catholic Biblical Quarterly

"This volume is a blend of sound exegesis, critical theological reflection, and pastoral sensitivity. . . . This book holds great value for conversations that are taking place within the church, as well as exegetical and theological concerns within contemporary scholarship. I warmly commend this book, especially to undergraduate and seminary students, clergy, and others who need a reminder of the diverse unity we often find in the NT."--Christopher W. Skinner, Interpretation