The Enduring Contributions of the Old Testament's Least-Known Women 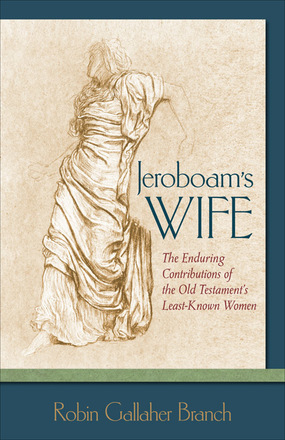 "A welcome addition to the growing literature that explores the significance of female biblical characters, major and minor, who are vital participants in biblical salvation history."--Catholic Biblical Review

Much has been written about prominent women of biblical history like Sarah, Ruth, and Esther. However, relatively little attention has been paid to the obscure women of the Old Testament whose words are not recorded in the Bible and some of whom aren't even named. Yet often these less prominent women played important roles in shaping the unfolding of God's plan. Indeed, the appearance of such obscure women sometimes signals the emergence of some great event. More than that, these lesser-known women, frequently faced with seemingly impossible circumstances, modeled unflinching integrity and moral courage.

In Jeroboam's Wife, Robin Gallaher Branch introduces us to seven of these obscure yet notable biblical women. By examining their historical and cultural settings with scholarly care and penetrating insight, she brings these women out of their obscurity and highlights both their unique challenges and their indelible contributions. By interacting with contemporary biblical, social, and psychological scholarship, she presents ancient biblical history in fresh and relevant ways.

Thoughtful questions for personal reflection or group discussion guide contemporary readers to ponder the deeper significance of these women's contributions and to reflect on points of personal application.

"This book is a real eye-opener to the influence of some of the least-known women referred to in the Old Testament. The focus of the text, and therefore our attention, is normally on men, the nation's recognized leaders. The women are often unnoticed and made little of in Bible teaching because they seem to be mentioned only in passing and the narrative does not record their words. Robin Gallaher Branch shows us how much more significant they are than that. Which Bible reader, for example, has not felt stricken at the apparently powerless grief of Rizpah, mother of King Saul's executed sons (2 Samuel ch 21)? Branch opens up a whole vista of the impact of this 'silent activist in nation-building.' The emphasis is on seven women but Branch weaves in the account of quite a few more, chapter by chapter. Men should read this book for a re-evaluation of women's roles in God's work. Women will be heartened to see in fresh depth God's quiet tribute to their significance. Preachers are given all sorts of ideas. It's a book for the thoughtful reader rather than the casual, of interest to Jew and Gentile alike. From Branch's spelling out her method I found insight in how more skillfully to understand Old Testament--and other--narrative and story."--Peter White, minister, Sandyford Henderson Memorial Church, Glasgow, Scotland

"Jeroboam's Wife: The Enduring Contributions of the Old Testament's Least-Known Women by Robin Gallaher Branch is extremely well-written and well-documented. . . . The author's interpretation of little-known passages from the Scriptures on five women and two girls in the Old Testament gives evidence of highly perceptive reading and stimulates the reader to approach the Bible with greater sensitivity. The author uses her knowledge of the social and historical background to the Bible and of rabbinic writings to bring to life characters who would otherwise have been passed by unnoticed. Although this is undoubtedly a very scholarly book (with several indexes which make the information readily accessible) it reads like a novel. . . . A well-edited and polished volume."--Mariki Nelson, senior lecturer of Latin, retired

"The stories of seven women of the Old Testament, three named and four unnamed, are examined in this collection of essays. . . . Before examining the stories themselves, Branch provides some basic information about narrative analysis, explaining characterization, setting, plot development, point of view, etc. Summaries, conclusions, and questions for further reflection all help to make this a very readable work. It is recommended for both teacher and student."--The Bible Today

"In Jeroboam's Wife, Robin Gallaher Branch examines five women and two girls who appear as minor characters in the Hebrew Bible and investigates their importance in the biblical text. . . . The stories of these obscure and often silent women demonstrate that God consistently works in unconventional ways to turn times of trouble into times of deliverance. . . . The author draws on rabbinical and other sources of biblical criticism and provides questions for further reflection and discussion. Recommended for church libraries and for women's groups looking for study resources."--Congregational Libraries Today

"A welcome addition to the growing literature that explores the significance of female biblical characters, major and minor, who are vital participants in biblical salvation history."--Catholic Biblical Review

"[Robin Gallaher Branch's] love for Hebrew narrative is obvious in her writing, as is the amount of time she has spent studying these obscure women. . . . Jeroboam's Wife is much enhanced by numerous indexes (modern authors, names and subjects, ancient sources, including Rabbinic literature) and a clear preface, introduction, and conclusion. Robin Gallaher Branch is an able biblical scholar. Her extensive footnotes offer much to the careful reader. . . . Gallaher Branch closes her book with a short, but very strong section on the character of God revealed in the stories of these obscure women and girls. Women's groups, Bible studies, and entry-level feminist bible courses would find this work to be of substantial value."--Amy Gohdes-Luhman, Biblical Theology Bulletin

"I applaud Branch's efforts, especially as she engages some biblical material that has been largely unexamined. Further, while her scholarship is solid and comprehensive, she writes in a style easily accessible to a wide range of readers. By including reflection questions at the end of each chapter, she provides a nice resource for use in settings dedicated to the study of less-known biblical texts."--Donna Desarro-Raynal, Interpretation