Why Christians Must Think Differently about the People and the Land 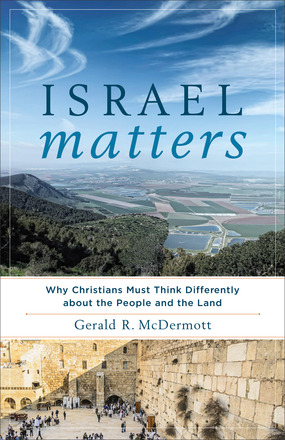 Widely respected theologian Gerald McDermott has spent two decades investigating the meaning of Israel and Judaism. What he has learned has required him to rethink many of his previous assumptions.

Israel Matters addresses the perennially important issue of the relationship between Christianity and the people and land of Israel, offering a unique and compelling "third way" between typical approaches and correcting common misunderstandings along the way. This book challenges the widespread Christian assumption that since Jesus came to earth, Jews are no longer special to God as a people, and the land of Israel is no longer theologically significant. It traces the author's journey from thinking those things to discovering that the New Testament authors believed the opposite of both. It also shows that contrary to what many Christians believe, the church is not the new Israel, and both the people and the land of Israel are important to God and the future of redemption.

McDermott offers an accessible but robust defense of a "New Christian Zionism" for pastors and laypeople interested in Israel and Christian-Jewish relations. His approach will also spark a conversation among theologians and biblical scholars.

Contents
Introduction
1. Getting the Big Story Wrong
2. Does the New Testament Teach That the Church Is the New Israel?
3. Those Who Got It Right: A History of Christian Zionism Starting in the Second Century
4. Looking More Closely at the Old Testament: Salvation for the World through Israel
5. Looking More Closely at the New Testament: A Future for Both the People and the Land of Israel
6. Political Objections: What about the Palestinians?
7. Theological Objections: Is the First Covenant Obsolete?
8. If All This Is True, Then What?
9. Six Proposals
Appendix: Covenant and Land in the Old Testament
Indexes

"On one hand of the Protestant ecumene, the ideological captivities of once 'mainline' churches prevent understanding of the unique calling of the Jews and the role therein of the land. On the other hand, dispensationalist evangelicalism has a place for them, in a scheme other Christians must judge a bizarre perversion of Scripture. This book could be a historic breakthrough."

"It is a pleasure to commend this discussion of the relationship between the church and the people and land of Israel. McDermott's voice is a crucial one as he shows how this theme is neither new nor tied to one particular Christian tradition. The question of Israel's role in God's purposes is relevant and appropriately nuanced, and this book, dealing with a topic that often is treated too simplistically by both sides in the debate, will be of great value to the church."

"Because so much discussion of Israel is polarized between uncritical fundamentalism and liberal demonization of the Jewish State, Gerald McDermott's book is more important than ever. In addition to dispelling the myth that Christian Zionism is a new political construct, McDermott offers a balanced interpretation of Christian theological tradition regarding Judaism and a close reading of the Bible that both strengthens Christian belief and makes room for the Jewish people in their covenantal homeland. Israel Matters is a must-read for all people of faith as well as for every person interested in understanding both the place of Judaism today and the Middle East and in pursuing peace in that troubled region."

"In clear, accessible, and engaging language, Gerald McDermott tells us how and why his views have changed regarding 'Israel'--that is, the Jewish people, the Jewish religious tradition, and the land of promise. Wary of uncritical, dispensationalist Zionism and hypercritical anti-Zionism alike, McDermott examines with skill and intelligence a multitude of complex biblical texts, historical developments, political realities, and theological quandaries. He then channels these insights into a coherent and forceful argument on behalf of a radical claim that the Church has too long evaded--that Israel, in all its dimensions, is an essential component of God's redemptive purpose in history."

Mark S. Kinzer, author of Postmissionary Messianic Judaism: Redefining Christian Engagement with the Jewish People and Searching Her Own Mystery: Nostra Aetate, the Jewish People, and the Identity of the Church

"Not content to take on supersessionism, McDermott reworks covenantal theology to argue that there remains a covenant with Israel, which includes the land, and that this insight has implications for Christian doctrine as a whole. At the same time, he eschews a starry-eyed vision of the current State of Israel, preferring instead to acknowledge its mistakes while also recognizing its importance in history. In Israel Matters, McDermott has placed Christian Zionism on firm biblical and theological footing. I heartily recommend it."

"Every theologian--and especially those theologians who might be inclined to disagree--should read Gerald McDermott's Israel Matters, as it is destined to become the standard text for this perspective. Highly recommended."

Bruce Ashford, professor of theology and culture, provost and dean of faculty, and fellow for the Bush Center for Faith and Culture, Southeastern Baptist Theological Seminary

"McDermott cuts through the simplistic platitudes of both the Christian left and right, offering a third way. . . . McDermott makes a nuanced case for the centrality of Israel in redemptive history--past, present, and future. . . . Israel Matters should position McDermott as the leading theological voice calling for a renewed, ecumenical commitment to Christian Zionism. . . . His key contributions are threefold. First, McDermott shows that Zionism has deep roots in the Christian tradition that predate the rise of dispensationalism and modern Jewish Zionism. Second, he offers an appreciative, yet critical assessment of modern Israel's history and policies. Finally, he makes an exegetical case for Christian Zionism that is not reliant on dispensationalism, but can be affirmed by many Christians who are not committed to a particular system of interpreting the biblical covenants. . . . For the many evangelicals who are not dispensational, but also reject supercessionism, McDermott's proposal in Israel Matters offers an intriguing way forward."

"McDermott has written an important book that I believe is well worth reading and keeping in one's library for reference material. He succinctly lays out the history of Christian Zionism. . . . He describes in great detail how the Land of Israel and the Jewish people are inexorably linked, mainly through God's promise of an eternal inheritance that was given to the patriarchs Abraham, Isaac, and Jacob. He argues effectively that this promise has been, and always will be valid. . . . The author makes a very compelling argument that the Jewish right to statehood is sound both from a Biblical as well as from a modern analysis of the political history of the land of Palestine."

"McDermott argues for a non-dispensationalist, non-millenarian form of Protestant Zionism. In this he follows Jonathan Edwards and the early Puritans, but he breaks from them by affirming Israel's positive role in salvation history. His Zionism refrains from highly specific historical prophecies. In this sense, it is new. . . . [This book is an] important [milestone]. . . . The exclusive association between Christian Zionism and immediate messianic and eschatological scenarios should be called into question. Interesting new forms of Christian Zionism are emerging. America's demography is changing. The new Christian Zionism represents an important shift within mainline and Evangelical Protestant thinking, for it eschews the precision and literalism of dispensationalism and millenarianism."