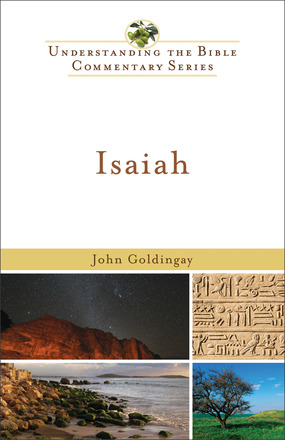 The book of Isaiah depicts for its readers what happens when Isaiah volunteers to become Yahweh's gofer--when he acts and speaks on Yahweh's behalf with Yahweh's authority. In this careful and insightful commentary on Isaiah, Goldingay unfolds the voices and messages of those prophetic actions and experiences. While doing this he points out that three attributes of Yahweh come into distinctive focus in Isaiah: Yahweh's majesty and authority, Yahweh's passion in anger and compassion, and Yahweh's insight and capacity to formulate a plan and put it into effect. Goldingay also examines the way Isaiah thinks about the people of God and the relationship between the vision of who they could be, the reality of who they were, the calamity of that contrast, and ultimately the promise Yahweh offers to them.

"Goldingay's commentary belongs to a series that employs neither a precritical nor an exclusively critical approach to biblical interpretation. Like the authors of other volumes in the series, he utilizes an approach that is referred to as "believing criticism." It is based on fidelity to critical approaches and sensitivity to matters of faith, the faith of both the ancients and contemporary readers. He begins his introduction with an identification of various voices found within the book and a discussion of the significance of the word both spoken and written. Attention is then given to some of the most salient theological themes of the book, such as the character of God, the world of the prophet, and the spirituality that he exemplifies. The text of the entire biblical book itself is treated section by section. Though the approach is somewhat critical, the book will appeal to Bible students and the general readership as well. It is highly recommended."--The Bible Today

"John Goldingay, writing in the New International Biblical Commentary series provides a highly readable commentary, balanced so as to enrich the life of both the academy and the Church, which is a stated goal of the series. From a perspective of believing criticism, Goldingay's commentary engages critical issues gently, seeking to draw the newcomer to the critical debate. As well, he shows concern for the canonical shape of the text, and its place within the larger canon of Scripture and the thought and imagination of the Christian Church. Goldingay's 'believing criticism' provides an introduction to some of the critical issues of Isaiah, but because he writes not only for the academy, this aspect is necessarily abbreviated and selective. The commentary readily provides a faithful reader, however, with a thoughtful and informed exposition of this great prophetic book."--Toronto Journal of Theology

"I find that G's attempts to both understand the Book of Isaiah as a whole and to take seriously the diachronic elements traceable in the greater Isaianic corpus have produced a commentary that is headed in the right direction and will be useful to any pastor or biblical scholar." --The Catholic Biblical Quarterly

"Serious lay readers will benefit from Goldingay's commentary on Isaiah. Its limitations do not compromise the overall high quality of the work he has produced. Scholars may at times feel shortchanged but they too will get a good return especially with careful attention to the 'Additional Notes.'" --Journal of Hebrew Scriptures

"If one is looking for a commentary of Isaiah that is brief, readable, and affirms faith, Goldingay's is among the best, because he makes wise use of the critical, scholarly tools and tries to listen to the text on its own terms."--Hebrew Studies Journal