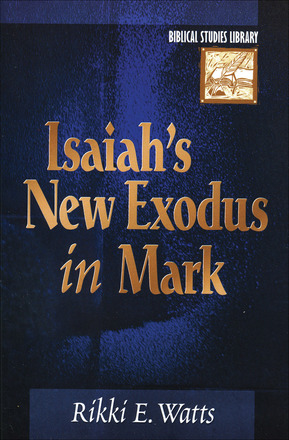 "Argues persuasively that Mark has been profoundly influenced by the book of Isaiah."--Morna D. Hooker,

Scholars have long sought the theological perspective that gives coherence to Mark's gospel. In Isaiah's New Exodus in Mark, Rikki Watts argues that Mark's primary concern is to present Jesus as the one who unexpectedly fulfills the hope of Isaiah's long-delayed "new exodus."

"The relationship of the New Testament writings to the Jewish scriptures is a perennial problem for students of early Christianity. Rikki Watts' comprehensive study of the possible links between the Gospel of Mark and the Book of Isaiah represents a significant addition to the ongoing debate."--Christopher Rowland, Dean Ireland Professor of the Exegesis of Holy Scripture, University of Oxford

"Watts does provide an overall, thorough and thought-provoking look at the Gospel of Mark. A significant contribution of Watt's work is his insight into how the NT writers utilized the OT. Specifically, he demonstrates how a citation of motif functions as a symbol or icon and carries a whole field of meaning which itself is 'located within the on-going schema of Israel's story'(382); furthermore, he affirms and develops Howard C. Kee's observation that Mark conflates OT references and places them in critical points in his argument. Finally, Watts demonstrates the importance of viewing the prophetic transformation of Israel's past. This work is definitely a source that demands consultation, not only for Markan studies, but by any one studying the New Testament's use of the Old Testament.--David M. Hoffeditz The Evangelical Quarterly 72:1 (2000), 81 University of Aberdeen

"This book makes a significant contribution to our understanding of Markan structure and theology . . . Watts has made his case that from the point of view of the evangelist, the good news of Jesus Messiah was just as it has been written in the prophet Isaiah."--Sharyn Dowd, Review of Biblical Literature (2000) Lexington Theological Seminary

"Rikki Watts' important book argues persuasively that Mark has been profoundly influenced by the book of Isaiah, and that his gospel reflects, in particular, the expectations expressed in chapters 40-55, where remembrance of the Exodus from Egypt has been transformed into hope for a new Exodus. Although he challenges many of my own views, I welcome his insights into Mark's understanding of the gospel, and find much here with which I am happy to agree."--Morna D. Hooker, Lady Margaret's Professor Emerita, University of Cambridge; Fellow of Robinson College, Cambridge

"This is a very important, groundbreaking study on the Old Testament background to Mark's presentation of Jesus. From here on, no one should try to read Mark's narrative with understanding without taking into consideration how much the theme of the New Exodus in Isaiah influenced his understanding of Jesus and of Jesus' announcement of the coming of God's rule."--Gordon D. Fee, Professor of New Testament Studies, Regent College

"An impressive example of biblical theology and of solid scholarship. Watts shows convincingly how Mark interprets Jewish tradition in light of the fulfillment of Isaianic prophecy."--Martin Hengel, University of Tübingen

"Overall, Watts's monograph is the most successful of the recent attempts to show the influence of an Old Testament paradigm on the Markan gospel (cf. Derrett, Roth, and Swartley). In my opinion he has basically proved his case for an Isaian substructure to Mark, and that is a major achievement."--Joel Marcus, Journal of Theological Studies

"This type of biblical theological research bodes well for a better understanding of New Testament redemptive theology while maintaining its organic and developmental connections with the formative events and themes in the Old Testament Scriptures. This book represents solid scholarship, a creative use of other disciplines (social theory), and irenic argumentation. It provides a useful model for the investigation of the literary and theological structure of the other Gospels and New Testament literature as such."--Erwin Penner, Canadian Evangelical Review

"Offers a thoughtful contribution to the on-going discussion on intertextuality between the Gospel of Mark and the Book of Isaiah. It is a textbook for both OT and NT students."-Yohan Pyeon, Religious Studies Review

"Baker Book House must be commended for choosing Rikki Watt's monograph to be reprinted as part of their Bbilical Studies Library series. The purpose of this series is to make available to a wider audience of biblical scholars reprints of monographs which have been published on the other side of the Atlantic. . . . Watts has made a significant contribution to Markan studies, and I anticipate that Watts's volume will become a standard reference and citation for all future academic work in Mark's Gospel."-Kevin W. Larsen, Stone Campbell Journal