How New Is the New Testament?

First-Century Judaism and the Emergence of Christianity

by: Donald A. Hagner 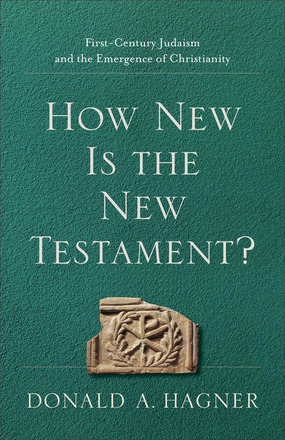 "Old or new? Continuity or discontinuity? In his survey of the New Testament, Donald Hagner demonstrates why it is not a case of either/or but of both/and--and indeed why continuity and discontinuity are paradoxically intertwined. Hagner's book should be compulsory reading for anyone who persists in supposing that the Old Testament is irrelevant for Christian faith."

"Against the current emphasis on continuity between the New Testament and the Hebrew Scripture, Hagner seeks to restore the balance by looking at what is new about the new era. The book is a reminder that what came with Jesus not only was tied to the promises of old but also brought fresh realities and a renewed hope. Hagner's survey of key New Testament texts shows that what came was a freshness that made old things new."

"How new is the New Testament? Hagner's conclusion is 'Not altogether new, but newer than you think.' His answer is convincing. He works his way book by book through the New Testament, assessing degrees of continuity and discontinuity between the Old Testament and the New. In the process, he adds valuable nuance and precision to the debate over the so-called new perspective on Paul, while successfully avoiding any implication that the 'newness' of Christianity somehow invalidates or supersedes Judaism. A welcome contribution."

"For far too long, Judaism and the Jewish law was presented as the toxin for which the Christian gospel was the antidote. The unspeakable evils of the Holocaust provided the necessary force to reverse that pendulum's motion, but in some circles it has swung too far in the direction of downplaying the decisive importance of what was new in the proclamation of God's acts in Jesus and in the giving of the Spirit. In this accessible volume, veteran scholar Donald Hagner sets forth the evidence for discontinuity that cannot be ignored or written off with integrity as we seek to balance the rootedness of Jesus and the early church in the faith of Israel with the new wine that could not be contained in the wineskins of the parent religion."

David A. deSilva, author of The Jewish Teachers of Jesus, James, and Jude: What Earliest Christianity Learned from the Apocrypha and Pseudepigrapha

"How New Is the New Testament? addresses a very difficult and sensitive topic. Professor Hagner is eminently qualified to write such a book, which reflects decades of biblical scholarship and theological reflection. The relationship between Israel and the church and the place of the Jewish people in God's ongoing work are questions of the utmost importance. This book must be engaged."

"I have looked forward to this book for some time. Although Hagner appreciates and understands continuity between the Testaments, he also recognizes necessary discontinuity, often neglected in recent theological discussion. Even though there are a few places where I would have argued the point differently, I am pleased that Don has taken the time to make such an encompassing and convincing case for the 'dramatic newness' that is found in the New Testament."

"The mature reflections of a seasoned and dedicated NT scholar, Donald Hagner's How New Is the New Testament? offers a straightforward assessment of the current climate of NT studies with reference to its Jewish roots. Hagner traces the historical see-saw between continuity and discontinuity throughout church history and offers compelling evidence that the pendulum has swung too far toward continuity in recent decades. He takes the reader on a fast-paced tour, from Matthew through Revelation, on what is really new in the NT. The author virtually unties the Gordian knot between the New Perspective on Paul and the old perspective, though he comes down, in all essentials, on the side of the old perspective. Hagner weaves a rich and complex tapestry of OT promise and NT fulfillment, the backside of which tapestry has been occupying exegetes for too long. The panoramic view of the NT presented here, written by a first-class Neutestamentler, is beautiful in its simplicity and compelling in its cumulative argument."

"Exceptionally well researched, written, organized and presented, How New Is the New Testament? is an invaluable and unreservedly recommended addition to personal, church, seminary, and community library Biblical Studies collections."