Stories of Grit and Grace from the Front Lines of War 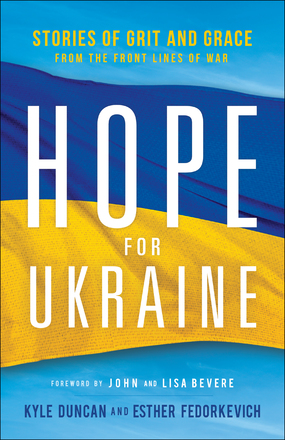 A Harrowing, Intimate Look into the Most Devastating War in Eight Decades

Part narrative, part wartime dispatch, Hope for Ukraine transports you into the gritty reality of war-torn Ukraine--and the front lines of faith, survival, and miraculous intervention. From scrambling to escape the bombs leveling their neighborhoods to fleeing sex traffickers in the chaos of border crossings to rescuing orphans trapped by Russian tanks, these stunning firsthand accounts tell the stories of real Ukrainians enduring terrible hardships with grit and grace.

Join bestselling writer Kyle Duncan and his co-author Esther Fedorkevich--both with deep family ties to Ukraine--as they take you inside the conflict with dramatic boots-on-the-ground stories and eyewitness accounts of Ukrainian refugees, aid workers, soldiers, and families affected by the conflict.

As the world holds its collective breath, these stories reveal the unbreakable spirit of a nation under siege. Even amid the chaos and tragedy of Europe's largest war since World War II, God is indeed at work in redemptive ways.