Homosexuality and the Politics of Truth 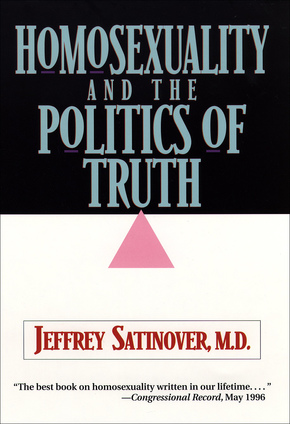 Psychiatrist Jeffrey Satinover examines recent research reported in medical journals (and the popular press). He finds many of these studies flawed and cites evidence that homosexuality is indeed changeable. He explains how psychology, biology, choice, and habit all interweave to produce deeply imbedded patterns of sexual behavior.

The model Dr. Satinover develops is based on modern science and psychological understandings of habit, compulsion, and addiction. Homosexuality, he writes, is one of the many forms of sould sickness that is innate to our fallen nature.

"Rigorous scientific scholarship and clear, passionate prose unite to make this book a rarity in our times."--Joseph Nicolosi President of the National Association for the Research and Treatment of Homosexuality

"Dr. Satinover argues convincingly that the growing acceptance of alternative sexual lifestyles' is not a function of convincing scientific evidence or compelling moral argumentation. His analysis needs to be heard and heeded today."--Stanton Jones Chairman of the Department of Psychology, Wheaton College

"By far the best, most comprehensive, most balanced and incisive treatment of the subject I have yet seen."
--Roger Sider, M.D., Medical Director, Pine Rest Hospital

"A brilliant discussion of how our society has abandoned the Judeo-Christian ethic for a modern form of paganism."
--Yarden Weidenfeld, Executive Director, Toward Tradition

"The best book on homosexuality written in our lifetime . . . ." --Congressional Record, May 1996