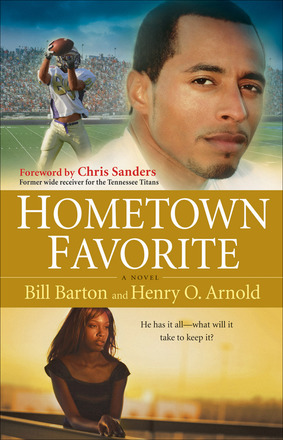 Talented, handsome, and personable, Dewayne Jobe rose from humble beginnings in rural Mississippi to play college football in Southern California and beyond. One of the best wide receivers in college ball, Dewayne is assured a promising career in professional football and easily finds success both on and off the field. Not only is he a great player, he's got the wife, the kids, and the pristine white picket fence to boot.
But catastrophe looms right around the corner and ultimately strikes with a crushing vengeance. Will Dewayne's faith and character stand the test of such tragedy? Or will he lose everything--including the love of his life? This modern retelling of the story of Job will capture readers with the age-old question of why bad things happen to good people--and how good people can survive.

"Great fiction ennobles and does so by exploring the foremost passions of the human heart: the transforming power of love, the yearning to belong, the power of friendship, the call of destiny, the crises that fashion and test character. Barton and Arnold reach for these heights and, in doing so, they call us to our best. That they accomplish this through a story that is as gritty and desperate as any we might witness on the evening news is a marvelous achievement."--Stephen Mansfield, New York Times bestselling author
[NO CHANGES ALLOWED WITHOUT MANSFIELD APPROVAL]

"Hometown Favorite is an amazing story of betrayal, forgiveness, redemption, and hope. The characters are vibrant and alive. Henry O. Arnold and Bill Barton have a rare and keen understanding of human nature making the spiritual truths of this story both profound and compelling."--Michael W. Smith, recording artist

"In their debut novel, Hometown Favorite, Henry O. Arnold and Bill Barton give us Dewayne Jobe, a man whose celebrity star shines bright until he's accused of wrongdoing and learns about the negative side of the spotlight. Like a close game and a score that just won't turn around, Dwayne's true fans and Hometown Favorite readers will appreciate the daunting odds fate doles out and this story's hard-won outcome."--Darnell Arnoult, author of Sufficient Grace