Hidden Treasures in the Book of Job 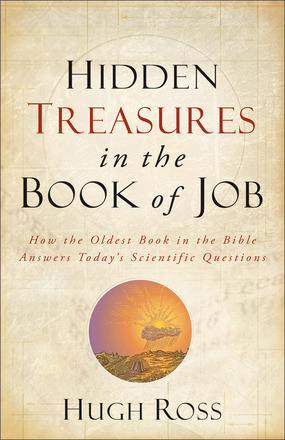 Arguably the oldest book in the Bible, the book of Job has a surprising amount to say about some of the newest scientific discoveries and controversies. Far from a book that is just about suffering, Job is filled with rich insight into both ancient and modern questions about

With careful consideration and exegesis, internationally known astrophysicist and Christian apologist Hugh Ross adds yet another compelling argument to the case for the veracity of the biblical commentary on the history of the universe, Earth, life, and humanity. Hidden Treasures in the Book of Job shows that the Bible is an accurate predictor of scientific discoveries and a trustworthy source of scientific information, and that the book of Scripture and the book of nature are consistent both internally and externally.

"This is a brilliant, insightful, and provocative book, filled with nuggets from digging deeply into the hidden treasures of the book of Job. Many of these, of course, are on the topic of science and Scripture from one of the top old-earth creation scientists writing today."--Norman L. Geisler, Distinguished Professor of Apologetics, Veritas Evangelical Seminary (www.VeritasSeminary.com), Murrieta, CA

"Yet another sparkling gem from the treasure house that is the mind of Hugh Ross! A fabulous and typically thoughtful treatment of many vitally important subjects."--Eric Metaxas, New York Times bestselling author of Bonhoeffer: Pastor, Martyr, Prophet, Spy and Amazing Grace: William Wilberforce and the Heroic Campaign to End Slavery

"Hidden Treasures in the Book of Job offers surprising and accurate scientific insights few consider. Hugh Ross brilliantly analyzes these details with great scrutiny to highlight the fact that Scripture presents compelling information regarding our greatest scientific complexities. I highly recommend this work for those considering the evidence of the Bible's scientific claims."--John Ankerberg, founder and president of The John Ankerberg Show

"This book has the potential to bring many to Christ. It's an elegant explanation of how Scripture, the scientific facts of nature, and the tragedy of human suffering all point people to God. Hugh Ross will even help you love your dog and explain to you why your dog can love you back! This is such a neat book. It's sophisticated and simple and arguably groundbreaking. I can't wait to use it in the classroom." --Sarah Sumner, dean of A. W. Tozer Theological Seminary

"Hidden Treasures in the Book of Job is a treasure in and of itself. It is enormously engaging in both its content and its style. It is one of the most up-to-date scientific, as well as biblical, responses in the evolution, creation, young earth debate, yet all offered with clear facts, gentleness of tone, and convincing logic."--Walter C. Kaiser Jr., president emeritus, Gordon-Conwell Theological Seminary

"Hugh Ross's academic grasp, scientific background, and Scriptural and biblical insight join to qualify him for providing us this helpful contribution for study in Job--one of the 'wisdom books' of the Holy Scriptures. Once again I am delighted to see the appearance of another one of Hugh's works."--Jack Hayford, founding pastor of The Church On The Way; chancellor of The King's University

"Thanks to Hugh, nearly every time I gaze up at the stars on a moonlit night or even report on the latest scientific story on my radio show, I can't help but hear that famous Rich Mullins chorus wafting through my mind: 'Our God is an awesome God.' Perhaps more than anyone else, Hugh has helped me to see that awesomeness all around me, from the immense grandeur of the cosmos to the infinite precision of the human genome. Thanks, Hugh, for giving me eyes to see." --Frank Pastore, host of The Frank Pastore Show

"Once again, Hugh Ross has provided readers with a resource that is well researched and thoroughly engaging. In Hidden Treasures in the Book of Job, he addresses vitally important topics such as the problem of evil, the relationship between science and faith, the nature of the soul, and key issues related to creation vs. evolution. All of this--plus insightful commentary on Job, one of the most intriguing parts of the Bible--makes the book itself a treasure from one of the church's most gifted apologists."--Alex McFarland, nationally syndicated radio and TV host

"Reading Hidden Treasures in the Book of Job was jaw dropping. I constantly marvel at the vantage point from which the brilliant mind of Hugh Ross views things, most of which go unnoticed by those of us whose narrow perspective is far more tied to the terrestrial. The sparkling and sometimes mind-warping ideas and thoughts Hugh puts on display made me feel like a little kid whose concept of time, space, creation, and eternity is about as advanced as the Chewbacca action figure I am bringing to show-and-tell."--Rick Bundschuh, pastor, Kauai Christian Fellowship; author of Deep Like Me and coauthor of Soul Surfer