Heart of a Lion 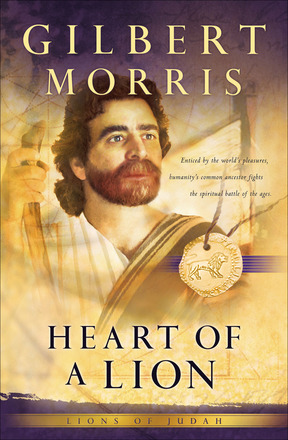 In his newest series, much-loved master storyteller Gilbert Morris turns his imagination to the Jewish ancestry of Jesus of Nazareth. Combining extensive research with skillful plotting, Morris creates believable scenarios and great stories. The result is an exciting series with riveting, action-packed adventures that will entertain, enlighten, and challenge readers as never before.

In the series debut, Heart of a Lion, Noah struggles to resist the siren call of the world's pleasures, while straining to hear the still, small voice of his father's God. The reader is in for a roller-coaster ride of surprises as humanity's common ancestor fights the spiritual battle of the ages.

"Prolific writer Gilbert Morris (HOUSE OF WINSLOW series and more) has turned his talents to chronicling the multigenerational saga of Jesus Christ's ancestors. Heart of a Lion kicks off the series with a look at Noah before the building of the famous ark. Noah and his family are presented as fully human--loving, fearing, and doubting like everyone else, despite the enormity of the role they will have in the fate of mankind. After Noah has been given his instructions to build the ark, it is their faith and the knowledge that they 'have found grace' in the eyes of the Strong One which sustain and let them carry on when otherwise they would have faltered in their mission. Through Morris' clear and easily read writing, readers can feel like they are actually there as a part of Noah's family and can share in the joy for the future when the ark at last touches land again. Heart of a Lion is a fine launching-point for Morris' proposed LIONS OF JUDAH series, which would be equally pleasing to young adults." ~ Historical Novels Review, Feb. 2003