A Christian Engagement with Traditions, Teachings, and Practices 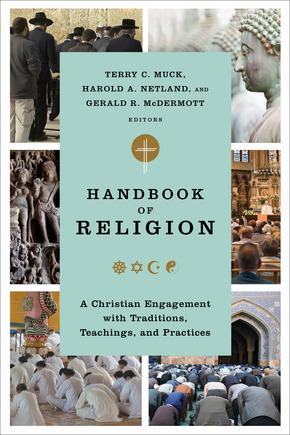 This comprehensive handbook provides a Christian perspective on religion and its many manifestations around the world. Written by top religion scholars from a broad spectrum of Christianity, it introduces world religions, indigenous religious traditions, and new religious movements. Articles explore the relationship of other religions to Christianity, providing historical perspective on past encounters and highlighting current issues. The book also contains articles by adherents of non-Christian religions, offering readers an insider's perspective on various religions and their encounters with Christianity. Maps, timelines, and sidebars are included.

"This handbook of religion is not simply a catalog of the religions of the world, or even of religions as such, but a conceptual framing of religions that engages the evangelical perspective without excluding other views. A novel feature is the inclusion of essays by practitioners of other religions and of cultural and ideological movements. Statistics and maps of the spread of religions make the handbook a useful resource for teaching and study."

"The editors have orchestrated a remarkable handbook of religion that will bring our understanding of non-Christian religions and new religious movements to a new level. This handbook brings practitioners of other faiths alongside the best of evangelical scholarship to produce a magisterial volume that will serve the church well for decades. In the face of seemingly intractable questions and issues that religious pluralism inevitably presents to the church, this volume reflects the nuanced conversations that are now taking place around the world. The result is a volume that is historically informed, theologically vibrant, and engagingly practical. This is truly a landmark text."

"Three exceptional scholars of deep Christian commitment in our global era of complex, interactive religious diversity have gifted us with a handbook rich enough in perspective, content, and method to satisfy historians of comparative religion, contemporary theologians of world Christianity, and evangelists in Christian mission anywhere in the world--a formidable task, which they have accomplished with considerable insight. As editors, Muck, Netland, and McDermott have gathered a team of fifty-five contributors to present, in a cogent, well-organized manner, what Christians--in their own questions--seek to know about non-Christian traditions. More than this, the handbook also provides important overviews on the study of religion and Christian theology of religion as well as topical essays on religion and science, gender, politics, violence, environment, among others. Deeply informed by a historical approach giving attention to indigenous or 'original' traditions that endure interactive change over time (through the coming and going of dominant religious movements as well as new religious movements) this handbook fills a void. While there are many textbooks introducing world religions, none does so with (1) the depth of scholarship, including real voices of religious adherents, and (2) the range of Christian hope to which this handbook bears witness. This would be an ideal textbook for my course Engagement with Other Faiths at Fuller Theological Seminary."

Diane B. Obenchain, professor of religion and director of the China program, Fuller Theological Seminary

"This tome is an excellent reference work written largely by Christians for Christians who are open to learning from and appreciating other religions and their practices but are not necessarily looking to convert. Several articles, however, are penned by adherents to other religions. . . . Articles are made applicable to readers with the addition of 239 study guides, most of which ask questions for further reflection. The book also contains current issues articles on many movements. Therefore, it will prove to be an appropriate and useful guide to the variegated religious scene in the world (particularly America), primarily for Christian readers, but for others as well. . . . Short bibliographies point readers to sources for further study. . . . Recommended. Lower-division undergraduates and above; general readers."

"The 'study aids' sprinkled throughout, including bulleted lists, maps, time lines, and statistics, add greatly to the usability of the volume as a textbook. . . . The editors accomplish their aim of providing an introductory evangelical perspective of various religions and their encounters with Christianity."

"Handbook of Religion may well represent the most accessible one-volume approach to world religions available today. Each of the major world religions is treated with respect and honest consideration. The book is wide in scope and focused in subject matter. Each of the world religions is considered from outsider and insider perspectives, offering a genuinely thoughtful approach that will allow preachers to gain a great deal of information while evaluating every worldview through the lens of external critics and the adherence of the belief system."

Preaching (Annual Survey of the Year's Best Books for Preachers, 2014)

"I have been teaching a Calvin Seminary course on Christian engagement with world religions for nearly a decade now; the [next] semester will be the last time I teach it before my retirement. I have used the same introductory textbook from the beginning. . . . With my syllabus in place, it hardly makes sense to make a major change and give myself the additional work. . . . I am going to change and use this book under review for my last go-around. Why? It is just that good! In fact, I do not know of any treatment of world religious traditions quite like it. . . . The evangelical editors . . . made a bold move to not restrict the authors of the more than one hundred essays in this volume to evangelical scholars or even to orthodox Christians but simply to get the best scholars available. . . . Not only is the content of this handbook outstanding, praise also needs to be given to formal features that are so important for students: sources and suggestions for further reading and study aids. . . . This handbook should remain for years to come on the reading lists of courses in Christian institutions of higher learning that invite students to engage the world's religious traditions."