Living the Love We Profess 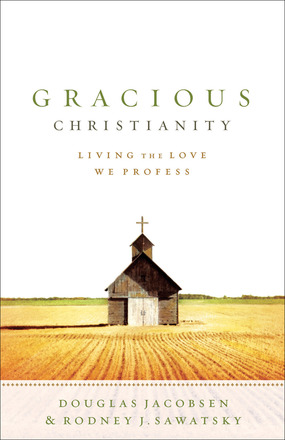 "[The authors] wrote this short book trying to answer the question of 'how Christians could be more embracing of those different from themselves, but remain people of strong faith and conviction.' They succeeded. . . . This book could become a classic, the Mere Christianity of the first quarter of the 21st century."--Terry C. Muck, Asbury Journal

In today's postmodernist and relativistic culture, Christians must contend with being perceived as argumentative, vindictive, and petty--along with the criticism that religion, in general, is a source of violence and destruction. These pejorative labels and connotations do not resonate with the fruit of the Spirit or with Christ's mandate to love God and neighbor.

But graciousness is a nonnegotiable dimension of Christian faith. It goes to the very core of the gospel. It is what makes the gospel good news. Without grace and graciousness, Christianity loses its message. In this book, Douglas Jacobsen and Rodney Sawatsky offer a succinct proposal to recover Gracious Christianity. It is a concise but relatively comprehensive overview of Christian beliefs showing how historic Christianity supports graciousness in faith and life. The eight chapters cover God and creation, humankind, hearing God's voice, the fullness of salvation, the Spirit and life, being church, the Bible, and the future.

Gracious Christianity will be used in undergraduate and graduate religion and theology classes, and it will serve as either an introduction to or a reminder of the "living faith" for believers from various traditions. Its broad-minded and ecumenical spirit will grant it a comfortable home in the academy and the church.

"Gracious Christianity is a beautiful, intelligent, and readable introduction to Christian faith. It will be of help to people approaching the faith for the first time, eager to see it as a grace-filled and peaceable way of life and not as an argumentative and tensely-held dogma. It will also be a great help to people who are Christians but want to get a fresh vision of what their faith can mean in their lives and in our world."--Brian McLaren, pastor (crcc.org) and author (anewkindofchristian.com)

"I have never read a more lucid and compelling summary of the Christian faith. With its story of grace and love mixed with conviction and commitment, this is a book to ponder in one's heart, to discuss with one's friends, and to savor for a lifetime. If I were not a Christian, I might very well want to become one based on my reading of this text."--Richard T. Hughes, distinguished professor of religion, Messiah College

"Marked by unaffected humility, Gracious Christianity is what an earlier generation would have described as a winsome invitation to the Christian faith. As in the best of catechesis, Jacobsen and Sawatsky cover the basics and provide an account of the hope that is in us."--Frederick W. Schmidt, associate professor of Christian spirituality, Perkins School of Theology; author of What God Wants for Your Life

"Jacobsen and Sawatsky provide a look at 'mere Christianity' through the lens of the gracious life to which God's creating, revealing, saving, and indwelling acts call us. Though the authors gently introduce us to points of view, terminology, names, and ideas that have appeared throughout the church's history, this book is not for those who need all the loose ends tied up in neat knots. It's for those who want to join in theological conversation with fellow Christians about the beliefs that matter most to people who are called to love God and their neighbors."--Dennis Okholm, professor of theology, Azusa Pacific University

"Gracious Christianity is itself a gracious gift to all of us. In a spirit of loving simplicity, the authors offer us marvelous insights into the Christian life. This is a book to read and reread!"--Richard J. Mouw, president and professor of Christian philosophy, Fuller Theological Seminary

"This gentle little book manages to summarize the entire scope of classic Christian theology, from the nature of God to the end of time, in amazingly few pages. . . . [The authors] not only describe the basic tenets of the Christian faith but also draw out their implications for everyday life. . . . Basing their theology on Scripture, the authros draw on influential apologists past and present such as Augustine, Aquinas, Bonhoeffer, Nouwen and McLaren. This gracious and accessible book, which includes abundant discussion questions for group study, will appeal to a wide spectrum of Christians."--Publishers Weekly

"A good little book. . . . Both authors hold PhDs and yet one of the strengths of this book is it does not smack of academic snobbery. Gracious Christianity certainly is not a casual read despite its length and neither is it a tune up for new Christians. This treatise will provoke you intellectually and hopefully incite you to a more passionate living out of your faith. . . . It is well worth your investment."--Joe Montague, Phantom Tollbooth

"Gracious Christianity is an important and welcome invitation to an audience that needs to hear that 'we are called to be a people of steadfast conviction as well as a people of welcome and embrace'. . . . Students in first-year seminar classes in college and university settings will benefit greatly from this message. However, Jacobsen and Sawatsky's message would also benefit parishioners studying in Sunday school class settings in any number of congregations."--Todd C. Ream, www.cccu.org

"A concise primer of the faith. . . . An important question, which emerged out of the authors' friendship and which undergirds the book, is 'how Christians could be more embracing of those different from themselves yet remain people of strong faith and conviction.' The authors model an engaging answer to this question in their articulation of Christian orthodoxy, drawn from wide-ranging (from Anglican to Anabaptist to Catholic) sources, citing the likes of John Wesley, Evelyn Underhill, John Donne, Ernest Boyer, and Thomas Massaro. Allowing such diverse believers to dialogue--if only through their respective literatures--models an encompassing and respectful way of living Christianly in this global, diverse religion."--Jenell Williams Paris, Prism

"Provocative, but gentle and gracious. . . . Jacobsen and Sawatsky provide a readable and easy-to-follow proposal, in this primer and passionate call, for how to recover Gracious Christianity. . . . Their treatment is that of 'mere Christianity,' and thus their words can appeal to people from many different rooms in the catholic household. Their ecumenical spirit is also evident and appeals deeply to this reviewer. . . . One of the extremely valuable aspects of this little book is the highlighted practical questions that appear throughout. . . . The section titled, 'What is the Bible?' is worth the book alone. Simple and memorable analogies abound in this book. . . . If you want to enter an ongoing theological conversation with other Christians about what they believe, and how we can together love God and our neighbor, then this is a marvelous place to begin your journey. Rarely does a book take theology, in all of its important categories, so seriously while at the same time fleshing out the implications of Christian theology for everyday life. This is a gem and a book I will read again and recommend widely."--John H. Armstrong, ACT 3 Review

"Gracious Christianity succeeds as a gentle introduction to, or as an overview of, the Christian faith. It's highly readable in style--other scholars, take note! Thoughtful discussion questions are scattered throughout the book. . . . [It] covers a rich, holistic understanding of what Christ calls us to be and do as the world-wide, ecumenical Church. Gracious Christianity is the sort of book I'd consider giving to a Canadian inquirer who is wary of the Christian faith or, in some cases, who has been wounded by the Christian Church. The book succeeds as a gentle discussion starter, while educating and being open to questions along the way."--Rev. Terry M. Smith, The Messenger

"[The authors] wrote this short book trying to answer the question of 'how Christians could be more embracing of those different from themselves, but remain people of strong faith and conviction.' They succeeded. This book is right for our time. . . . This book could become a classic, the Mere Christianity of the first quarter of the 21st century. It sounds the right notes in our cacophonous world."--Terry C. Muck, Asbury Journal

"The authors . . . show a richly textured awareness of the [Christian primer] genre, yet offer distinct perspectives. Well written, [this book is] closer to [a] literary gem than to [a] clumsily crafted textbook. [It] avoid[s] pedantry, [has] a disarming modesty and [is] readily accessible to the literate layperson. . . . Gracious Christianity presents a winsome case for evangelical Christianity from an Anabaptist point of view. . . . While the substance of their work is first rate, the connotative messages are just as important, forming a subtext for Christian wholism. Meekness and community shine through their coauthorship: two people, one a college president, one a professor, blending their insights from sociology, theology and church history. Evident as well is grace in the face of human suffering. . . . Their basic thesis, which they sustain and reiterate through every page and paragraph of the book, is both simple and profound: Gracious love defines the core of God's character, and gracious love defines the life and work of Christ. . . . I am deeply grateful for Gracious Christianity. It reaffirms the basic doctrines that Christians across all major traditions have commonly believed, drawing insights, quotations and illustrations from widely scattered sources. But it does so in a manner that excludes ugly aberrations and rejoices in the message of our Lord and Savior, Jesus the Christ, the Son of the Living God. And it does so in a way that champions rather than modifies or qualifies his most radical teachings."--Timothy Paul Erdel, Mennonite Quarterly Review