God in the Movies

A Guide for Exploring Four Decades of Film 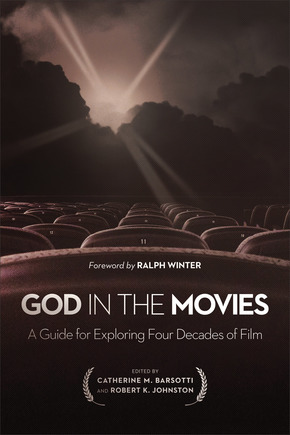 This informative guide helps readers combine their love of movies with their desire to grow closer to God. Foremost experts on faith and film, all connected with the Reel Spirituality Institute at Fuller Seminary, explore forty leading movies from the last four decades to encourage movie lovers and small groups to reflect critically and theologically on their film choices. God in the Movies introduces and analyzes the spiritual content of top films from the 1980s through the 2010s, opening viewers up to a conversation about life, faith, and God.

"In my conversations with Christian moviegoers, I find an old delusion very much alive: Many still believe that what matters most about a movie is its message. They speak as though art's method--its measures of beauty, imagination, and excellence--are merely secondary, just the packaging for delivery of didactic lessons. I find a far more rewarding vision in the work of Catherine M. Barsotti, Robert K. Johnston, and their community of cinephiles. God in the Movies is an essential text for courageous moviegoers. Paying attention to forty years of cinematic excellence and leading us into the questions raised by art's provocative ambiguities, these writers celebrate an incarnational vision. They show us that the Spirit moves in mysterious ways throughout the world of cinema--in movies popular and obscure, commercial and foreign, inspiring and disturbing. With prophetic understanding, they coax us to become wise interpreters of the world's big-screen dreams. They give us 'eyes to see.'"

Jeffrey Overstreet, Seattle Pacific University, author of Through a Screen Darkly and Auralia's Colors and senior film critic at Christianity Today and lookingcloser.org

"Spirituality in movies? You bet! With their book God in the Movies, Catherine M. Barsotti and Robert K. Johnston present a host of insightful essays. Each gives us eyes to see the subtle but powerful nuggets of spiritual wisdom tucked into mainstream Hollywood films. You've seen most of these movies; now take a second look. You'll be amazed at what you'll find!"

"Catherine Barsotti and Rob Johnston, experts in expressing the profound connections between faith and culture, have opened up the conversation even further in their newest book together, God in the Movies. They have drawn together brilliant authors, prophetic films, and fabulous insight into the importance of movies--their messages, their meaning, and their influence on our hearts, minds, and spirits. Christians today must be culturally engaged, and this book challenges us and guides us to connect our appetites for entertainment with our hunger for discussing divine truth."

"At their best, films help people engage with the most profound questions of human life. Christianity--and all religion--does this in a much more comprehensive way. In God in the Movies, Catherine Barsotti and Rob Johnston do a wonderful job of showing how film can stimulate religious discussion and how those discussions can inform our viewing of films."

"Looking at forty films from four decades, God in the Movies guides us to think about and talk about films theologically. I highly recommend it as a resource for scholars, filmmakers, movie lovers, pastors, or anyone wanting to engage others in a conversation about God through the movies."

Praise for Barsotti and Johnston's previous book, Finding God in the Movies

"I've often suggested that Christians open up their homes for a film night: show a movie and follow up with snacks and a discussion. It's a simple idea but, for most people, is tough to carry out. Where do we begin? We begin with Finding God in the Movies. Robert Johnston and Catherine Barsotti have done a wonderful service in creating a book that teaches believers how to analyze films. They provide excellent examples of thoughtful criticism and great discussion questions to engage our minds. Use it alone, with your family, or, better yet, invite the neighborhood."

"To read God into movies is not difficult. To find God there waiting for us--now, that is something else altogether. Finding God in the Movies peels back God's presence in thirty-three compelling films, leading us from superficial analysis and utilitarian agendas to deep, personal engagement. Bravo!"

"Written with humility, grace, and sensitivity, Finding God in the Movies will be a tremendous resource for those seeking light inside the cinema. More than just a guide to great films, this book is a window into how to engage with them and find on the other side a deeper understanding of the Lord."

"An important and insightful book that held me spellbound. Once again, Catherine Barsotti and Robert Johnston demonstrate their incredible ability to dialogue with both Hollywood and the community of faith. They offer rich spiritual insights and astute observations on thirty-three films. Unlike other film review books, they appropriate each film's vision of life and invite the reader to interact with it. Here is an invitation to enhance your journey of faith via the silver screen."

"In every arena of youth ministry today, we are seeing that movies are providing students many of their takes on life. Those of us seeking to minister to youth need effective resources to help them engage in dialogue between faith and film. Barsotti and Johnston have been teaching Young Life staff for a number of years to creatively do this. Now their book, Finding God in the Movies, can help you use movies more authentically in your teaching and outreach. I wholeheartedly recommend this book."

"A remarkable study of some incredible, thoughtful works that may indeed serve as sermons of sorts. . . . [Cinematic stories] give us words and pictures that illustrate our hopes and fears, our aspirations and longings. And at their best, they point to something higher than ourselves, and someone infinitely greater. Our desire to know God and understand our place in this fallen world never goes away. But how we intersect with that desire changes over time. And books like God in the Movies help us better understand that critical intersection in new, relevant ways."

Praise for Barsotti and Johnston's previous book, Finding God in the Movies

"Johnson and Barsotti take the 'theology and film' discussion to the next level in what amounts to a wonderful discussion on connecting our faith with culture."