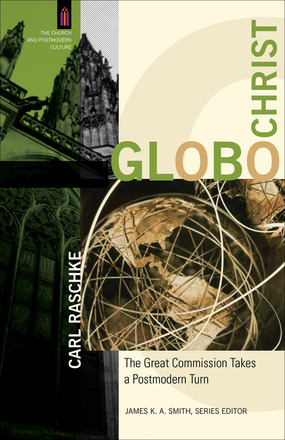 "Raschke's style is vigorous, engaging, and fast-paced, drawing on a formidable range of scholarship. . . . A significant contribution which ought to be read by every student of contemporary Christian culture."--Debbie Herring, Theology
The rise of the Internet and the proliferation of digital technologies have profoundly affected the world; it is not only smaller but also more interconnected. What role does the church play in this multimedia-dominated globe?

Carl Raschke, author of the acclaimed The Next Reformation, tackles this question and others in GloboChrist: The Great Commission Takes a Postmodern Turn. In this third volume of the well-received Church and Postmodern Culture series, Raschke tackles the subjects of globalization, postmodernism, and information technology and their impact on missions and evangelism. In addition, he addresses the role that Christianity plays in an increasingly pluralistic world, providing concrete strategies for confronting the challenges. Raschke, in short, helps Christians respond to the tectonic shifts of the twenty-first century.

This excellent melding of theory and practice will appeal to a broad audience of scholars, students, pastors, and interested lay readers. GloboChrist will not only leave an indelible mark in the academic realm but will also create a lasting impact on culture at large.

"For those who have tried to follow the intricacies (and vagaries) of postmodern thought to find out what it can tell us of the night, this vigorously discerning volume offers a glimpse of the global dawn. Drawing on many resources and a focused evangelical faith, Raschke lays out a case for a Christian perspective on globalization as a dynamic development that opens reconstructive (post-deconstructive) possibilities for pursuing the Great Commission. Globalization is not essentially an economic issue. The 'GloboChrist' is sweeping the world in a post-postmodern way in spite of militant Islamism, Christian fundamentalism, modernist liberalism, and secular economism. This is the best book on globalization I have read by an overtly Christian thinker. It complements and challenges my own efforts to discern theologically what is at stake in globalization."--Max L. Stackhouse, professor emeritus, Princeton Theological Seminary; author, Globalization and Grace

"I'd hoped to give GloboChrist a quick read, but after picking it up I simply couldn't put it down; it is elegant, clear, and provocative. Raschke not only helps us see Christ and mission afresh in our hi-tech, pluralistic, postmodern, and global context but also equips us with engagement strategies."--Dwight J. Friesen, associate professor of practical theology, Mars Hill Graduate School, Seattle

"GloboChrist is the unconventional title of an intriguing inquiry into postmodern patterns and ideas and the challenge to mission. The book is a confident statement for these uncertain times, a troubling of the waters that will stir complacent Christians in their assumptions."--Lamin Sanneh, professor of world Christianity and of history, Yale University

"Intellectually challenging. . . . [GloboChrist] is spectacularly fluent in the whole postmodern field, written with blunt Lutheran instincts, sort of a Bonhoeffer meets Kierkegaard interacting with Philip Jenkins and Lamin Sanneh and maybe Vinoth Ramachandra. [Raschke] is remarkably fluent in Islamic scholarship, too, and draws on resources about globalization that are wide and surprising. . . . [He] is an author to contend with and he surprises us often with his unique insights. . . . Raschke has an appendix which includes a hard-hitting response to some anti-pomo critics, and a critical review of one of Brian McLaren's books (Generous Orthodoxy) which will hopefully generate some generous conversation within, at least, the emergent village."--Byron Borger, heartsandmindsbooks.com

"This book sums up the postmodern European challenge and the church's response better than anything out there right now. . . . Raschke gives some compelling food for thought."--Andrew Jones, tallskinnykiwi.typepad.com

"[Raschke] perspicaciously interpret[s] the 'postmodern moment' in GloboChrist. . . . Raschke's book offers cultural exegesis to clarify the church's missional task in a global age. . . . GloboChrist ought to be regarded as an essential postscript to Lesslie Newbigin's The Gospel in a Pluralistic Society. Raschke is at his best when he assumes the prophetic mantle."--Christopher Benson, Books & Culture

"Raschke recasts the Great Commission in the context of globalization and postmodernism, where religion enjoys an unprecedented, but largely unacknowledged resurgence. Such a task needed to be done, and Raschke . . . is as qualified as anyone to have attempted it. . . . He builds a case for an understanding of Christian witness that takes seriously what he calls, 'the global postmodern moment' or simply, 'globopomo.' This understanding includes fresh takes on traditional missiological issues. . . . Since the church finds itself amidst the tectonic shifts of 'globopomo,' it would do well to add this book in the discussion. . . . Raschke's insightful perspective on the church's missional task in a globalized, postmodern world warrants the attention of the missionary community."--Al Tizon, Missiology

"Raschke is an established commentator on the encounter between Christianity and postmodernism. This volume . . . is directed particularly towards 'the American evangelical Christian Church' but speaks with equal clarity and energy to all of Western Christendom in the post-9/11 era. . . . Raschke's style is vigorous, engaging, and fast-paced, drawing on a formidable range of scholarship without ever losing touch with the strong thrust of his argument. . . . This book is a significant contribution which ought to be read by every student of contemporary Christian culture. It will also appeal to those living and working in arenas where Islam is a significant cultural force."--Debbie Herring, Theology

"GloboChrist is Raschke's critique of the West's anemic versions of Christian faith and his brave challenge that Christians become radical, relational, revelatory, and rhizomic in order to fight Islam as we watch and wait for the Kingdom of God in the return of Jesus. . . . The true strength of the [Church and Postmodern Culture] series [is that it] has something to say and it demands response. It preaches and it stirs me to preach. . . . [It] both draws Christians into the postmodern conversation and provides space for readers to think about their own vocations. . . . [Raschke's] work can embolden preachers in their proclamation and encourage pastors in their discipleship, thereby facilitating the call of more preachers, pastors, and professional thinkers."--Aaron Perry, Asbury Journal

"[Raschke's] book is a valuable challenge. . . . [It] certainly does spur us to think in fresh ways . . . and no small part of its value is found in the fact that he treats the postmodern turn as something more than just an epistemological issue. That alone makes the book a necessary and valuable contribution to contemporary evangelical discussions of postmodernism, as Raschke issues a desperately needed call to American Evangelicals to move beyond the culture wars and to stop chasing the red herring of epistemological relativism. . . . Raschke's book can serve as a catalyst to readers to explore further the ever-changing face of the global church, pushing us beyond ill-informed and culturally-constrained ways of thinking about the church. With passion and clarity, Raschke guides his American Evangelical readers into a bigger picture of God's work in the world, and in doing so, he helpfully introduces his readers to important thinkers like Vinoth Ramachandra, Lamin Sanneh, and Phillip Jenkins, who have been working in recent years to help readers in the West develop a more accurate picture of the global church."--David M. Mills, Journal of the Evangelical Theological Society

"From his impressive familiarity with religious history, [Raschke] outlines the deep challenge Islam poses for Christianity. . . . I was powerfully drawn through the pages, eager to learn what conclusions the author would draw, and what action he would advocate."--Dolores Walker, Libraries Alive

"The [Church and Postmodern Culture] series is a welcome attempt to chart theological thinking in light of postmodern thinkers and trends. . . . [Raschke] rightly insists that the gospel must be indigenized or contextualized as it enters non-Christian corners of the globe. Raschke is helpful in boldly concluding that the Christian witness must confront both non-Christian faiths and anti-Christian prejudices. He rightly holds up Islam as the giant challenge to GloboChristianity and insightfully calls for incarnational presence as the proper missionary posture. The book whets the appetite to read postmodern thinkers like Derrida and Deleuze appreciatively rather than apprehensively. . . . This provocative take on the Great Commission deserves its place in this fine series and will challenge Christians to think missionally and philosophically at the same time."--Richard Haney, Interpretation