A Story of Hope for Northern Uganda’s Children 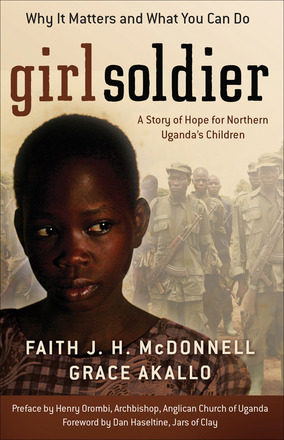 More than 30,000 children have been kidnapped in Uganda. Now one of them has a voice.

When Grace Akallo was fifteen years old, rebels from the Lord's Resistance Army raided her school. Thus began her nightmarish existence as one of northern Uganda's thousands of child soldiers. Forced to endure savagery, starvation, abuse and other horrors with only her faith to sustain her, Grace eventually escaped to share her story with the world.

Faith McDonnell is an American activist and writer with a special concern for the future of the vulnerable Acholi people of northern Uganda. In Girl Soldier, Grace's personal account and Faith's historical and spiritual insights are woven together to tell the story of Uganda's forgotten children. Be inspired by this heartfelt account and moved to do your part in making sure that these children will not be forgotten.

"For most of us the enormous monolith of the suffering of Africa is impossible to imagine, much less enter into. This book represents a significant door. It is a precious gift from two women, both uniquely qualified to speak for the suffering children of Uganda, one an eloquent survivor and the other a fearless advocate. It is no coincidence that their names are Grace and Faith."--Michael Card, Bible teacher, musician

"Girl Soldier is not fiction, yet that fact becomes harder to believe with every page we turn. How did we not know about this sooner? Why are we not doing more?This book is more than just a call to action. It is a challenge to our moral compass. Grace and Faith have made it very clear that for more than twenty years we have turned our backs on an entire generation of children. What is equally clear is that all hope is not lost. Grace's story of resilency and peace is the light that can guide us all."--Adrian Bradbury, founder and director, GuluWalk

"A much-needed reminder of the suffering and faith of the people of northern Uganda. Both have gone largely unnoticed for too long."--The Rt. Rev. Robert W. Duncan, bishop, Episcopal Diocese of Pittsburgh; moderator, Anglican Communion Network

"After reading this book, I will never be the same. The story of Grace Akallo and the brutality against children in Uganda is hard for me as an American, living comfortably, to imagine--but it is real and continuing. The world has ignored these innocent children for decades, as the turmoil in Uganda has escalated into one of the world's biggest humanitarian crises. Yet this is a story of hope and a simple challenge to us all: Help! Our prayers and our finances can be life-changing for thousands in Uganda, and pressure on our government to intervene can alter the course of that nation forever. Thank you, Grace and Faith, for sharing your stories and calling us to love and to act on behalf of those who cannot help themselves." --Robbie Seay, Sparrow Records recording artist and songwriter

"Faith McDonnell has given a precious gift in the story of Grace Akallo. Their book serves as a poignant reminder that the darkness of the soul and the cruel behaviors it leads to are more devastating than we could imagine. Apart from the ignorance and indifference of the world to the plight of children caught in violence, there is one still One who understands and redeems. Hope can grow and flourish from even the most broken of seeds. This is an incredible account that demands a hearing and invites a response."--Steven W. Haas, vice president, World Vision International

"Scripture tells us there are currents in motion that we will not be able to stop. Yet we see hope, and it allows us to push back against the effects of the Fall. These are the stories that remind us why Jesus hung on a cross."--from the foreword by Dan Haseltine, lead singer, Jars of Clay

"Girl Soldier is a moving account of a people's suffering and a girl's extraordinary faith. In a unique format the book moves back and forth between the narrative arc of Grace Akallo's life and the historical roots of the Northern Uganda tragedy. But this is not just a story of victimization; rather, it illuminates the resiliency of the human spirit. Providentially the namesakes of the two authors, Faith McDonnell and Grace Akallo, underscore the theme of this book--that in spite of unimaginable terror, faith and grace abound."--Allen Hertzke, professor of political science, director of religious studies, University of Oklahoma; author, Freeing God's Children: The Unlikely Alliance for Global Human Rights

"After meeting with child soldier slavery survivors in Uganda, I wondered if anyone could bring this moving story of horror and redemption to the world. Now Grace Akallo, a survivor herself, and Faith McDonnell, a fighter for religious liberty who knows the history of Uganda, have done just that. Read this book. Weep. And then rejoice at Grace's incredible struggle. A moving call to prayer and action."--John R. Miller, former U.S. Ambassador-at-Large on Modern-Day Slavery; research professor in international studies, Elliott School, George Washington University