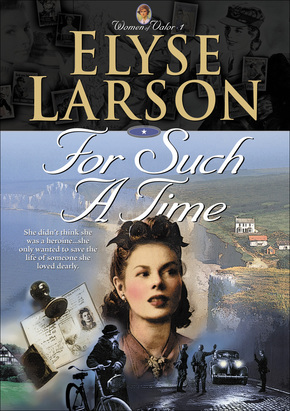 Readers know of the bravery, boldness, and spirit shown by the

known, perhaps, but equally dramatic were the roles that women played in

the conflict, both as support from home and as part of the fight near the

For Such a Time, the first novel in Elyse Larson's WOMEN OF

VALOR series explores the lives of two cousins--one French, the other

American--who find the courage to face danger and betrayal in

occupied France during at the height of the war.

Giselle Munier and Jean Thornton are more like sisters than cousins,

having spent many summers together through their parents' travels. But

with the outbreak of World War II, both women's lives take a dramatic

hospital in Wales. Giselle, active in the French Resistance, has been

betrayed and arrested by the Nazis. Hearing of her cousin's plight, Jean

knows she must try to rescue her cousin, no matter how ill-advised the

mission seems. Both women will learn far more than they ever imagined

about courage, trust, and forgiveness before their harrowing experience