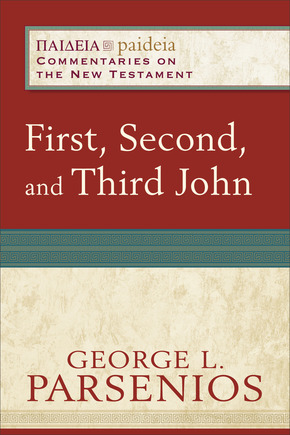 In this addition to the well-received Paideia series, a senior New Testament scholar examines cultural context and theological meaning in First, Second, and Third John. Students, pastors, and other readers will appreciate the historical, literary, and theological insight offered in this practical commentary.

"Amid a crowded field of commentaries on the Letters of John, this volume is perhaps first among its peers. At once accessible, thorough, and conversant with the intricacies of the Greek text, Parsenios provides both scholar and preacher with enormously valuable insights. This may just become the first commentary many will reach for when working in these short letters."

"This concise and able mid-range interaction with John's letters draws on rich resources--ancient Greco-Roman backgrounds, patristic commentators, medieval art, and modern scholarship like that of Raymond Brown and Judith Lieu. John's letters are seen as a coherent literary development of themes laid down earlier in the Fourth Gospel. Parsenios's creative exposition will stimulate fresh reflection on these letters' literary strategy and on the characteristics of faithful fellowship in the Johannine tradition of 'christomorphic life.'"

"Parsenios's years of scholarship on the Gospel of John pay dividends in this exciting new commentary on First, Second, and Third John. Parsenios has seamlessly integrated insights from ancient rhetorical handbooks, patristic interpretation, and modern scholarship. The analysis is clear and compelling, and a wealth of information is communicated in a clear and engaging manner. In short, Parsenios's commentary on the Johannine Epistles is an admirable addition to the Paideia series, and the first place students of these beguiling letters should now turn."

"Paideia Commentaries seek to strike a balance between the core questions of critical discussion, sensitivity to the rhetorical strategies, theological convictions, cultural contexts of the text, and accessibility to readers perhaps unfamiliar with, or disinclined to delve deeply into, the scholarly debates. George Parsenios's commentary fulfills these criteria admirably. . . . The commentary draws on an extensive range of other literature (including other Johannine scholarship), but it does so in a deceptively straight-forward way, masking the depth of research and knowledge that supports it. This means that the commentary is accessible without being superficial. . . . Even seasoned scholars will be stimulated by the commentary, while those seeking a way into the Johannine letters would do well to choose this as their companion."

"A neat and easily accessible commentary. . . . In the main body of his text, where Parsenios discusses the different sections of the letters, he shows himself to be a thorough and refined exegete. . . . He succeeds in combining grammatical, literary, historical, and social material, coming to sound theological conclusions. . . . Parsenios succeeds in offering a readable commentary with exegetical depth on different levels. The audience intended will not be disappointed. . . . Parsenios's frequent references to sociocultural data that enlightens the understanding are very helpful. His sensitivity to Greek grammar and semantics also enriches the discussions, as does his sensitivity to rhetorical features. His emphasis on the paraenetic nature of some sections in the text is refreshing. . . . This is an ideal and balanced commentary for the readership intended. Those who want to start reading the letters of John would make no mistake in starting with this commentary."

"An excellent addition to the well-received Paideia Commentary Series. . . . Parsenios brings his expertise in ancient and patristic texts alongside the scholarly debates on these small texts. He presents alternative views on the significant issues before concluding with his strongest position. Parsenios weaves into his presentation considerations by the church fathers and artists, providing a refreshing and insightful interpretation of these texts. . . . Sidebars emphasize relevant ancient and/or patristic quotes. Relevant art pieces also add interest and insight. Altogether, Parsenios presents a fresh reading of these small texts, a useful contribution to Johannine scholarship that will benefit all theological students of Johannine literature."

"Parsenious helpfully begins by discussing the relationship between the gospel and letters before moving to chronology, rhetoric, settings/purposes, ancient letters, etc. He ably draws upon the whole range from ancient sources . . . to the views of modern scholars. . . . Each chapter concludes with a valuable section 'Theological Issues.' This is an enjoyable and engaging commentary to read without being overwhelmed by detailed footnotes/endnotes on minutiae. Although its focus is specifically students, it will admirably serve a wide-ranging readership. A rich resource indeed."

"The Paideia series is designed for graduate students who want to explore the New Testament in depth, appreciating the original context of the biblical book and the range of its contemporary meaning. This volume . . . admirably fulfills the goal of the series."

"An insightful contribution to the Paideia commentary series. . . . Parsenios brings to these epistles years of work in the Gospel of John. . . . Parsenios has many helpful and insightful comments throughout. . . . The book contains pictures and numerous sidebars that add to its value. . . . It is very readable, and there is no disadvantage for those who do not know Greek. . . . Parsenios understands the Epistles of John in light of the Gospel. This is seen throughout. . . . This makes this volume very helpful for studying and teaching the Epistles in a larger context."