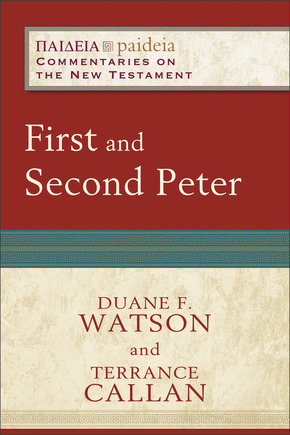 "A solid, rhetorically informed commentary that fulfills the aspirations of the Paideia series. I look forward to recommending this work to my students."--Peter H. Davids, Houston Baptist University

In this addition to the well-received Paideia series, New Testament scholars Duane Watson and Terrance Callan examine cultural context and theological meaning in First and Second Peter. This commentary, like each in the projected eighteen-volume series, proceeds by sense units rather than word-by-word or verse-by-verse. Students, pastors, and other readers will appreciate the historical, literary, and theological insight Watson and Callan offer in interpreting First and Second Peter.
About the Series
Paideia commentaries explore how New Testament texts form Christian readers by

"Duane Watson and Terrance Callan, each of whom has written significantly on Second Peter, team up here to provide a fresh and coherent exposition of both letters--a most welcome contribution to Petrine studies and a valuable tool for reassessing the difficult question of the relationship between the two canonical letters bearing Peter's name."

"Duane Watson and Terrance Callan have written a solid, rhetorically informed commentary that fulfills the aspirations of the Paideia series--namely, a work that will be readable, informative, and serviceable for students of the New Testament. Their depth of scholarship on these works, gained from years of study and teaching, is now made accessible in one place. I look forward to recommending this work to my own students."

"Watson and Callan's commentary on 1 and 2 Peter provides a helpful combination of attention to the biblical text, ancient sources and context, and theological issues. This clearly written work will be appreciated by both pastors and students who want to learn more about these biblical texts, the contexts in which they arose, and their theological implications for the church today."

"In an age of overly large volumes that easily swamp students with detail, Watson and Callan's tome on the Petrine Epistles offers the best of contemporary scholarship with concise precision. A masterful and complete commentary full of sound and sober interpretive judgment combined with blocks of contextual and theological insights, this accessible text will also aid the busy pastor concerned for faithful biblical exposition."

"A rhetorically and culturally informed exposition of 1 and 2 Peter written in a very readable and easily accessible form. . . . What sets this commentary apart from other mid-level commentaries is its attention to supplementary details. One of the helpful features of the volume is the occasional use of pictures (and maps) to illustrate different features of the Greco-Roman world. . . . Along with this, text boxes are used to supply relevant information to the reader. . . . Another set of text boxes are used to set each section in its proper place in the overall argument of the epistle, showing how the passage fits with what has preceded and what will follow. All of these will be extremely helpful tools for students and pastors. . . . The commentaries of Watson and Callan are a helpful contribution to Petrine studies. Pastors and students will be benefited by the wealth of knowledge that each commentator brings to the letters, and their insights into the rhetorical strategies of the epistles, in particular, will be a welcome addition for both beginner and expert alike."

"[Watson and Callan] continue the trend of excellence exhibited in the rest of the series. . . . Photographs, maps, and sidebars provide context. . . . [This] well-researched and clearly written [volume] offer[s] lucid expositions of Biblical texts based upon solid scholarship. . . . A welcome addition to . . . Petrine Biblical Studies. Recommended for large academic and seminary libraries."

"Two well-known Petrine scholars combine here to produce this fresh reading of 1 and 2 Peter. Watson and Callan offer analyses to nonspecialists and with plenty for those immersed in these texts to explore. . . . [The authors] avoid overwhelming readers with . . . scholarly minutiae that so easily intimidate nonspecialists and threaten readability. . . . There is much here for instructors to use, and I appreciate several 'threads' running through both commentaries offering helpful pathways into these letters. . . . Both writers do a nice job of explaining cultural, historical, and literary contexts in a way helpful for student readers, introducing less-familiar subjects along the way (often in short insets with brief explanatory asides). . . . A welcome contribution to Petrine studies quite suitable for classroom use."

"Duane Watson and Terrence Callan bring together expertise in New Testament backgrounds, attention to the rhetorical contours of the text, and concern for its theological significance. The text boxes included throughout the book remind the reader that these epistles were written at a time when the art of persuasion and speaking were a ubiquitous part of the culture. Similarly, the occasional photos and illustrations help make the culture of the 1st century tangible instead of remote. All of this is brought to bear on the theological issues that early Christians faced and then compare[d] with some of the challenges faced by modern Christians. . . . This is an excellent addition to the library of pastors, teachers, and students who want to understand the biblical text in light of the 1st-century culture in which it was written."

"Callan's approach is section by section rather than verse by verse (although Watson frequently follows the latter approach). In both instances, the commentary makes rapid progress through the biblical text. This, and the 'in rhetorical flow' sidebars which offer reminders of preceding and following sections, provides the strength of keeping the bigger picture in view at each juncture. Other sidebars provide broad, introductory background perspectives, as do occasional illustrative photographs."

"This fine series intends to provide commentaries that take into account the social, religious, and cultural context of the New Testament era but also the interests and questions of the contemporary reader. The readers most in the mind of the series are students at the masters or seminary level, along with pastors and others with a pastoral interest. . . . These two letters are both rich in theology and lend themselves well to the format and purpose of the series."

"[Watson] demonstrate[s] a profound understanding of both the text of 1 Peter and the environment in which it came into being. . . . Watson's entire contribution is engaging and intelligent. Callan's too, for his exposition of 2 Peter is just as nicely and competently done as Watson's of 1 Peter. . . . The bibliography which concludes the volume is extensive and up to date and the indices are very complete. . . . This is a quite impressive achievement both in terms of the contents of the book and the way in which that content is presented to the reader. This is a commendable, well written, enjoyable addition to any library."

"The Paideia Commentaries on the New Testament Series is an invaluable contribution to any library and a stand out among the already crowded commentary field. This series is directed, as the name implies, to the educated reader--namely students from MA level to the upper divisions. It is claims to be instructional, and it is; however, it is immensely readable. This addition to the commentary series is no different. . . . . Given the depth of the introductions, one should [not] expect to find anything less than a well-reasoned approached to reading these epistles. . . . Also found throughout the book, in both sections, are sidebars giving added detail that does not really belong in the body, but nevertheless, belong in the work overall. . . . If you are looking for a solid commentary that is as both theological and critically engaging for the Petrine Epistles, then buy this one."

"Especially because there has not been much attention paid to the Catholic Epistles in NT scholarship until relatively recently in history, I am happy to see this volume on 1-2 Peter. . . . The Paideia series aims to teach students the critical issues involved in the text, the general thrust of the text, and the theological significance of the text. No doubt we find an extremely competent volume that accomplishes these aims admirably."

"This volume will be of special interest to Bible collectors because of the original translations of each book by each author. . . . [A] fine book."