Finding Ourselves after Darwin

Conversations on the Image of God, Original Sin, and the Problem of Evil 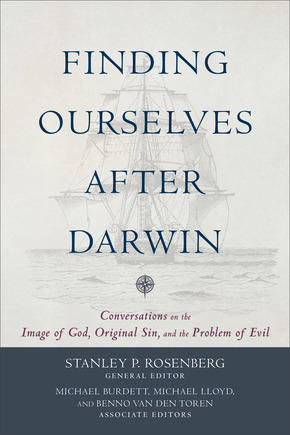 A multinational team of scholars focuses on the interface between Christian doctrine and evolutionary scientific research, exploring the theological consequences for the doctrines of original sin, the image of God, and the problem of evil. Moving past the misperception that science and faith are irreconcilable, the book compares alternative models to those that have generated faith-science conflict and equips students, pastors, and anyone interested in origins to develop a critical and scientifically informed orthodox faith.

"In this wide-ranging collection of essays, the authors engage in an important conversation on post-Darwinian challenges to Christian theology. Sometimes the authors disagree, but more often they provide complementary perspectives to questions concerning original sin, evil, theodicy, and the image of God. This book will challenge the reader to think about--and perhaps to rethink--these key aspects of the Christian faith."

"This is not just another book on theology and evolution but a serious attempt by well-established and emerging scholars to grapple with the most pressing theological issues that result from that engagement. By confining the discussion to key debates on the image of God, original sin, and the problem of evil from a range of different perspectives, the editors have achieved that rare combination of theological depth with philosophical sophistication in engagement with historical and contemporary perspectives on evolutionary theory. This is not only a book for serious scholars in this field, but--given that it encourages open and honest debate--it is also one that will be extremely useful for teaching and deserves to be fully embedded in theology courses as well as those in theology and science."

Celia Deane-Drummond, professor of theology and director of the Center for Theology, Science, and Human Flourishing, University of Notre Dame

"Too often reading books on science and religion by multiple authors feels like walking into a cramped room where everyone is shouting. This book feels more like entering a big open hall where there is room to breathe and room to think. It is not that anything goes--Christian theology has boundaries, what the contributors to this volume call "doctrines." Doctrines such as the image of God, the universality of sin among humans, and the goodness of God have not been overturned by the science of evolution. But evolution has called into question certain ways of explaining those doctrines. The contributors to the book show that the Christian tradition has the resources to explore different ways of explaining these doctrines without leaving the building. They are to be commended for drawing us further into that space."