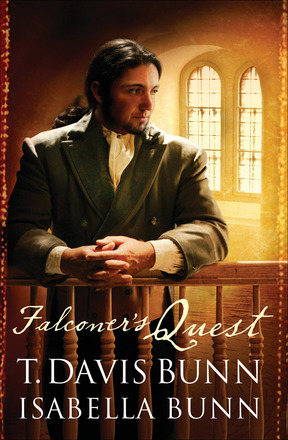 Davis and Isabella Bunn combine their complementary skills and experiences in crafting the compelling stories of the HEIRS OF ACADIA historical fiction series.

John Falconer, a hero readers can believe in, was introduced in Book 3, The Noble Fugitive. Along with Book 4, The Night Angel, these last three novels of the series can be appreciated on their own.

John Falconer, known to most as simply Falconer, is a large, powerfully built man whose gentle spirit shines through the physical and emotional scars of his previous life as a slave trader. His redemption has brought him full circle to the anti-slavery cause and a personal mission to free every slave he possibly can.

After the events recounted in The Night Angel, Falconer settles in a Moravian community on the Underground Railroad. He cherishes his new wife, Ada, and her son, Matt, whom he loves as his own. Falconer finally has discovered peace, within and without. When the unimaginable happens, he and Matt face a loss so searing they can barely endure another day.

Falconer finds himself back on board ship--this time with a father's responsibilities and an assignment of rescue rather than capture. His course takes him from the eastern seaboard of America to France, from Marseilles to the shores of North Africa. But enormous danger, risk of failure and even death challenge him on the high seas and in the desert's strongholds. He has conquered many of life's storms, but none as vast as this.

All the while, those inner bondages that have gripped as powerfully as iron chains are gradually loosening their hold. And a new hope begins to stir within...

The story of character forged in the fires of grief, loss and faith