Living Missionally in a Post-Christian Culture 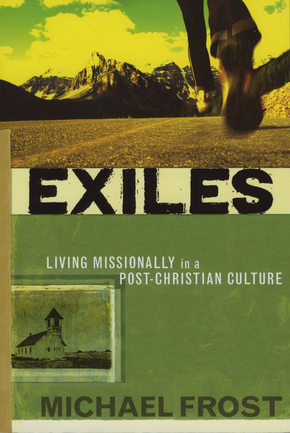 This book is for exiles: Christians who find themselves caught in that dangerous wilderness between contemporary secular Western culture and an old-fashioned church culture of respectability and conservatism. Frost presents a plea for such Christians to embrace a dynamic, life-affirming, robust Christian faith that can be lived confidently in a world that no longer values such a faith.

"Exiles captures the intensity, anger, wonder, heartache, clear-sightedness, and hope so many of us share in this moment of in-betweenness. Frost is a gifted communicator and leader who cares about the world and about the Christian church. He is moving the center of gravity toward a needed tipping point."

Brian McLaren, speaker and author of The Secret Life of Jesus

"If anyone is at all in tune with the culture around us, they will realize we have slowly but surely now shifted into a post-Christian world. With that happening, it is books like this church will help guide, encourage, and lead us to be living missional lives as followers of Jesus in the new world around us."

Dan Kimball, pastor and author of The Emerging Church

"Warning! This is a hard hitting book, but not in the sense of achieving a knock out blow to struggling church leaders who are enmeshed in maintenance, come-to-us mentality churches. Rather, Michael Frost is hard hitting in order to wake up churches in the West to the urgency of the missional challenge that they face in a post-Christendom and increasingly neo-pagan context. The insights developed here will spring the church from its self-imposed confinement and unleash it on the world, if readers have the courage to accept the risks and make the leap."

"An evocative and stimulating treatment which builds on earlier work written with Alan Hirsch [The Shaping of Things to Come, published by Hendrickson Publishers in 2003], Frost develops many of those earlier insights as he challenges the church to live missionally in a post-Christian culture."We may not agree with everything in this book, but it provides plenty of food for thought with respect to the nature of church, and to living as an exile in the contemporary western world."The image of 'exiles' is an evocative one and Frost exploits it in terms of the mindset and lifestyle of an exile, and the critique an exile might make of the host culture. This is counter-pointed with a critique of many aspects of more conventional church culture, as he challenges Christians to live the exilic life as an outworking of Christian identity and incarnational mission."--2007 Christian Literature Awards, Australia

"As he did in The Shaping of Things to Come, Frost begins the book on the reality that we are living in a Post-Christendom world as exiles in a foreign land, a fact that many Christians (especially in the West) are still coming to terms with. Once we accept this inevitable state of affairs, Frost challenges us to resist the impulses to bemoan the glory days, helplessly trying to rebuild the impossible or becoming complacent, allowing the values of the Empire to consume and distort our identity. Frost offers clear guidance on this journey: discover our Dangerous Memories, those revolutionary stories that inspire us; affirm our Dangerous Promises, offering true Spirit transformation; declare our Dangerous Criticism, boldly confronting unjust; and sing our Dangerous Songs, those birthing cries of revolution. The second chapter goes on to root these powerful truths in their strongest source: Jesus. Frost demonstrates how we have slowly allowed our Jesus to altered, losing His humanity in the abstract philosophy of His divine nature. While we accuse "liberal theologians" of stripping Jesus of His divinity in pursuit of His humanity, we commit an equal though opposite injustice by placing Jesus so far out of our own context and experience that He no longer presents an achievable model of Christlikeness. Through the creative use of visuals (b&w images of several Renaissance masterpieces), reflecting on how these images shape(d) our view of Jesus and our relationship to Him, Frost brings the radical character of Jesus back to where it is best suited--not on the lighted stage of grand stadium, not on the pages of beautifully bound book or in the words of a clever blog--but in the "mundane" reality of everyday life, specifically to the table. From the miracle at Cana to the meal in the upper room, we rediscover both the power of Jesus and his humanity. In chapter 3, the final in "Dangerous Memories", continues to flesh out what it means to follow and imitate Christ in this incarnational lifestyle. Doing what he does best, Frost illustrates his points powerfully using real life stories and example of what this rediscovered revolution might look like. Using examples of the creation of "third places" (sociological term for welcoming public spaces, such as cafes, communities centres, etc.), he demonstrates the impact of liberating Jesus & ministry from the untouchably religious framework we often couch them in. For those not able to start such daring ventures, he offers the profoundly important practice of the presence of Christ, drawing from the essential book by Brother Lawrence The Practice of the Presence of God. In a time when the world's mistrust of the religious institutions of Christianity leads people to devour such books as The Da Vinci Code, readers are challenged to embrace the naked truth of who Jesus is. Rather than denying the importance of the verbal proclamation of the Gospel, Frost asserts that the spoken message needn't take place from the stage or behind the pulpit, but in those very personal encounters when our incarnational living inspires the inevitable questions about why we are different. This final point is so important to me. Like so many, I have been burnt by the tactics of evangelism to the point where I have become reactionary. I am often so concerned that identifying as a Christian or (worse) a missionary will alienate me from my neighbours--which it very well might--that I put all my energy into guarding against misunderstanding instead of missional loving and living in the everyday context of my life. It was a much needed reminder."
--http://emergentvoyageurs.blog.com/

"Brian McLaren writes that "this book is for exiles: Christians who find themselves caught in that dangerous wilderness between contemporary secular Western culture and an old-fashioned church culture of respectability and conservatism. Frost pleads for such Christians to embrace a dynamic, life-affirming, robust faith that can be lived confidently in a world that no longer values such a faith. Mike is most recently the co-author with Alan Hirsch of The Shaping of Things to Come, one of the must read books of the past five years. . . . Frost's thesis is that Christendom has collapsed. He quotes Stuart Murray that "post-Christendom is the culture that emerges as the Christian faith loses coherence within a society that has been definitively shaped by the Christian story and as the institutions that have developed to express Christian convictions is in decline" (Murray, Post-Christendom, 19). Naturally, this is a matter of deep grief for many. For others, most of those who will read this review, it is also a moment of profound hope. We can rediscover ourselves as exiles, as a missional movement. Brueggemann offers his disciplines as a way for exiles to maintain a faithful witness in an alternative community--or communitas--an alternative culture. Frost will expand on the first four in the list above. He summarizes his approach in pages 15-24, then closes with the call to be generously angry, relating the story of George Orwell. Orwell began as a depressed, withdrawn writer who discovered the stories of Charles Dickens. He emerged as a man with a purpose, committed to exposing injustice and untruth, full of vision and ideals. Frost concludes that the work of the exile is not the discovery of a new gospel, but a rediscovery of the life of Jesus. Chapter two looks at Jesus the exile, and chapter three shows how we follow Him... these are our dangerous memories."
-- http://nextreformation.com/

"Believers, according to Frost (The Shaping of Things to Come, Hendrickson), must live a fresh and missional faith--without the trappings of modernism, consumerism and materialism--to be followers of Jesus in a post-Christian world. Though Frost's penchant for historical detail may lose those who are looking for a quick read and instant inspiration, his unique voice on everything from hospitality to war is worth hearing."
--OUTREACH Magazine

"Exiles is an empowering workbook and a careful analysis of the challenges and needed directions for new expressions of 'living missionally in a post-Christian culture.'"
--Zadok Perspectives