Everything Is Just Beginning 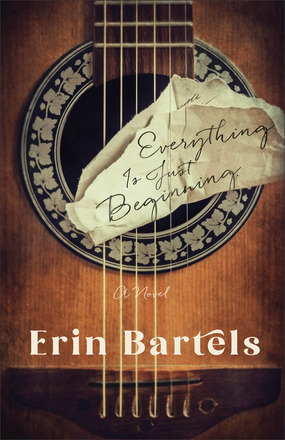 It was just one of those nights. One of those crazy, impossible nights that change your life. Forever.

When guitarist Michael Sullivan gets kicked out of his band (and his apartment), landing a record deal seems an impossible dream. And nothing about Michael's prospects points toward a better future. Until the invitation for a swanky New Year's Eve party shows up in the mailbox. It's addressed to his uncle, with whom he shares both name and living space, but his uncle is going out of town . . .

On the effervescent night of December 31, 1989--as the Berlin Wall is coming down, the Soviet Union is falling apart, and anything seems possible--Michael will cross paths with the accomplished and enigmatic young heir to a fading musical dynasty, forever altering both of their futures.


What people are saying about the novels of Erin Bartels

"Emotions leap off the page."--Library Journal


Erin Bartels is the award-winning author of We Hope for Better Things, The Words between Us, All That We Carried, and The Girl Who Could Breathe Under Water. She lives in Lansing, Michigan, and misses the 1990s more with every passing year. You can find her at www.erinbartels.com.