Essays on Religion, Science, and Society 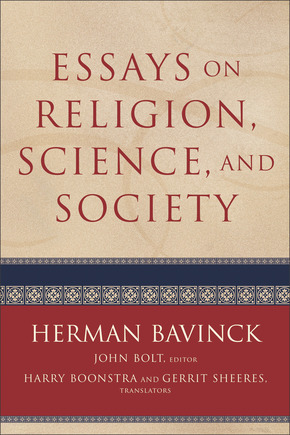 Herman Bavinck, the premier theologian of the Kuyper-inspired, neo-Calvinistic revival in the late-nineteenth-century Netherlands, is an important voice in the development of Protestant theology. This volume, now in paper, is the capstone of his distinguished career. These seminal essays offer an outworking of Bavinck's systematic theology as presented in his Reformed Dogmatics and engage enduring issues from a biblical and theological perspective. The collection presents his mature reflections on issues relating to ethics, education, politics, psychology, natural science and evolution, aesthetics, and philosophy of religion. Pastors, students, and scholars of Reformed theology will value this work.
Contents
Herman Bavinck: A Eulogy by Henry Elias Dosker
1. Philosophy of Religion (Faith)
2. The Essence of Christianity
3. Theology and Religious Studies
4. Psychology of Religion
5. Christianity and Natural Science
6. Evolution
7. Christian Principles and Social Relationships
8. On Inequality
9. Trends in Psychology
10. The Unconscious
11. Primacy of the Intellect or the Will
12. Trends in Pedagogy
13. Classical Education
14. Of Beauty and Aesthetics
15. Ethics and Politics
Appendix A: Foreword by C. B. Bavinck
Appendix B: Theology and Religious Studies in Nineteenth-Century Netherlands
Index

"I have long admired Bavinck as a major systematic theologian, but in these essays I discovered a Bavinck I never knew. He moves easily--and brilliantly--through adolescent psychology, conceptions of the unconscious, Islam, social contract theory, evolutionary thought, philology, and aesthetics, to name only a few of a broad set of topics. Here an amazing nineteenth-century Calvinist mind addresses with much wisdom a twenty-first-century intellectual agenda!"

"Bavinck's systematic theology was . . . only a part of a remarkably varied output that encompassed philosophy, pedagogy, psychology, and science. [This volume] acts as a useful summary of these wider interests, and is a tantalizing taster of the depth and the breadth of Bavinck's engagement with social issues. . . . Bavinck's positions are widely supported, and carefully argued, and he endeavours to be scrupulously fair to those with whom he engages. These essays are intellectually challenging mental exercise. They are also a pleasure to read. . . . The essays are clearly and engagingly written: Bavinck is fortunate to have translators so able to do him justice."

"The writings of Bavinck deserve both translation and wide dissemination, and the Dutch Reformed Translation Society is providing a great service to the theological world in this regard. Bavinck is a careful and engaged scholar whose work in the realm of religion, science, and society is still fruitful for Christian reflection. . . . [There is a] wealth of applied theology contained in this book. . . . In this translation are many . . . thoughts worthy of deep consideration by modern practitioners of various disciplines."

"In these essays readers will find Bavinck's interaction with a variety of important topics. This evidences a remarkable breadth of knowledge and wisdom as well as a profoundly consistent engagement of these issues from a Christian perspective. . . . All the essays repay the reader handsomely for the investment of time. Bavinck writes with a rare insightful clarity. His precision and theological simplicity are a model for Christian writers. His expression of deep doctrinal truth is memorable and perceptive. . . . He summarizes and synthesizes material well and communicates complex ideas with an economy of words. . . . This book is an excellent example of how Christian theology integrates with other disciplines. It is an outstanding source and resource, a model for theological engagement, and implicitly issues a challenge for contemporary theologians to carry on this task. Pastors, missionaries, educators, students, and others interested in the intersection of the Christian faith and culture, the intersection of Christianity and creation, and the intersection of special and general revelation should read this book."

"In this collection of essays, readers are exposed not only to Bavinck's neo-Calvinism, wherein he takes up a number of timely subjects pertaining to Christianity and its relationship to the civil sphere of life, they are also shown more generally responsible and intelligent Christian scholarship put into action. Bavinck's erudition is on full display as he presses the truth of the Christian faith beyond the domain of theology and the institutional church into the public square. These essays are skillfully translated from the Dutch volume . . . and include useful Scripture, name, and subject indices. . . . [Bavinck] deals with issues that, though appearing dated on the surface, are actually altogether relevant for our current cultural and theological situation. . . . It is important, I think, that Reformed scholars today take their cue from Bavinck in their own efforts to engage contemporary culture and the modern academy."

"To read [these essays] is to be forcefully reminded that Bavinck was not merely a theologian in the narrow sense, but a broad Christian thinker active in the academy, the church, and the state. . . . The general strength of the book is simply Bavinck's example. Here is the record of a keen mind, an irenic spirit, and a methodical laborer, grounded in the Scriptures and applying it to a host of questions."