Finding Hope in the Attributes of God 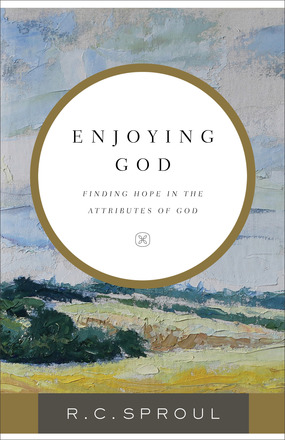 Discover the magnificence of the character of God

Confused, angry, and hurt after the death of his father, a young R. C. Sproul began his personal search for ultimate truth with these piercing questions: Who are you, God? And why do you do the things you do?

In Enjoying God, you'll journey with R. C. Sproul to discover the nature of God through his marvelous and often surprising attributes. In this warm, personal account, Dr. Sproul communicates deep wisdom of God as he shares his earnest, lifelong passion to know God and the profound hope he ultimately found in the attributes of God. He encourages each one of us to dig deep and seek the God who is alive, who is real, and who is love.

R. C. Sproul (1939-2017) was founder of Ligonier Ministries, an international Christian discipleship organization located near Orlando, Florida. He was also founding pastor of Saint Andrew's Chapel in Sanford, Florida, first president of Reformation Bible College, and executive editor of Tabletalk magazine. His radio program, Renewing Your Mind, is still broadcast daily on hundreds of radio stations around the world and can also be heard online. Dr. Sproul contributed dozens of articles to national evangelical publications, spoke at conferences, churches, colleges, and seminaries around the world, and wrote more than one hundred books, including The Holiness of God, Chosen by God, and Everyone's a Theologian. He also served as general editor of the Reformation Study Bible.

"In a day of rampant theological confusion and compromise, R. C. Sproul provides a voice of conviction deeply rooted in biblical truth and the faithful heritage of the gospel. He makes clear what is at stake in current patterns of evangelical compromise--the gospel itself."--Albert Mohler Jr., president, Southern Baptist Theological Seminary

"R. C. Sproul and I share a number of common interests, none more precious to both of us than the doctrine of justification by faith alone. Sola fide (Latin for "faith alone") was the material principle of the Protestant Reformation. Today's evangelicals tend to be unversed in Scripture and ignorant of their own history, so they are generally ill-equipped to defend what they profess to believe. And the doctrine of justification has been subjected to relentless attacks on several fronts in recent decades. One of the most disturbing elements of this devastating theological downgrade is the fact that some of the chief culprits arguing against sola fide have been people who self-identify as Protestants. Dr. Sproul has probably done more than anyone in our generation to reconnect contemporary evangelicals with their own rich history. In particular, he has been courageously defending the doctrine of justification for several decades. This book distills the best of his teaching on that issue. It's an important defense of the gospel's cardinal principle in a clear and compelling format. I'm happy to give it my most enthusiastic recommendation."--John MacArthur, author; speaker; pastor; president, The Masters College and Seminary

"For as long as R. C. Sproul has been involved in public ministry, he has stood firm against theological error while battling boldly for doctrinal truth. In Faith Alone he demonstrates the critical importance of affirming and protecting that great Reformation doctrine of justification by grace alone, through faith alone. Always respectful toward others, he proceeds carefully, biblically, and with unrelenting force. This book remains as important and relevant today as when it was first published."--Tim Challies, challis.com

"R. C. Sproul has done a masterful job of reminding us of the true nature of the gospel."--Jerry Bridges, The Navigators


Praise for Getting the Gospel Right

"Some of us want to get the gospel right; some of us just want to get it out. With a generous combination of love and conviction, R. C. Sproul helps us all to do both better."--Michael Horton, J. Gresham Machen Professor of Systematic Theology and Apologetics, Westminster Seminary California

"If you want the gospel, in all its ramifications, made perfectly clear to you, you will find no better source of information than this book by one of America's outstanding Christian theologians."--D. James Kennedy (1930-2007), pastor, Coral Ridge Presbyterian Church

Praise for Not a Chance

"The word 'chance' is often used, but little understood. Some even attribute causal and explanatory powers to chance (and even to nothingness). If chance (uncaused events) exists, then the God of the Bible does not. I am grateful that the new edition of Not a Chance puts the lie to erroneous notions about chance, and does so in a readable, well-researched, and compelling manner. In the process, the authors commend Christianity as the best explanation for our world of cause and effect and meaning."--Douglas Groothuis, professor of philosophy, Denver Seminary

"In this accessible and timely book, veteran Christian philosopher and apologist R. C. Sproul (along with theologian Keith Mathison) exposes the absurd lengths to which many skeptical scientists and philosophers have gone to avoid the conclusion that the universe and the things in it are the handiwork of the Triune God of the historic Christian faith. With his notorious wit and incisive argumentation, Dr. Sproul shows the reader that chance is not an entity that can cause anything, that a self-creating universe is a self-contradiction, and that the only reasonable explanation for the existence of anything is that God exists. Every Christian who wants to make an effective defense for his or her faith should read this book."--Steven B. Cowan, coauthor, The Love of Wisdom; coeditor, In Defense of the Bible

"Not a Chance is a needed correction for errors that have crept into modern-day science. It is a refreshing and enlightening book that tackles difficult topics and brings them down to the layman. I fully support the ideas presented within it."--Dr. Robert Waltzer, professor and chair of biology, Belhaven University

Praise for What Is Reformed Theology?

"Not only does Dr. Sproul have an amazingly broad but detailed grasp of Reformed theology but he has also been gifted with the ability to explain complex theology in a way that is both interesting and understandable. That is no common gift. Accessible, biblical, and educational, this is one of the best books I have read on the subject."--Tim Challies, challies.com