What It Is, Where It Is Going, and Why It Matters 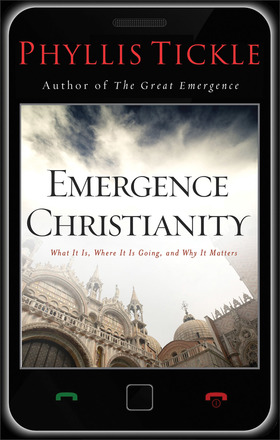 Welcome to the story that's still being written . . .

Whatever else one might say about Emergence Christianity, one must agree it is shifting and reconfiguring itself in such a prodigious way as to defy any final assessments or absolute pronouncements. Yet in Emergence Christianity, Phyllis Tickle gathers the tangled threads of history and weaves the story of this fascinating movement into a beautiful and understandable whole.

Through her careful study and culture-watching, Tickle invites you to join this investigation and conversation as an open-minded explorer. You will discover fascinating insights into the concerns, organizational patterns, theology, and most pressing questions facing the church today. And you'll get a tantalizing glimpse of the future.

"You will find many wonderful things between the covers of this book: provocative questions and astute observations about sacred space, hierarchy, authority. Scattered throughout are fascinating history lessons--who knew that a musical decision made in a Seattle church in 1956 is still reverberating in early-twenty-first-century house churches? Finally, Tickle's insights will help the church reflect on a larger question: How can we best serve the kingdom of God right now?"--Lauren F. Winner, author of Mudhouse Sabbath and Still: Notes on a Mid-Faith Crisis

"Phyllis Tickle is in a unique position by reason of experience, education, and personal courage to say things that many cannot say--or cannot see. Here she does it very well--once again. Christianity is emerging with or without Phyllis Tickle, but she is sure helping the rest of us to emerge along with it!"--Richard Rohr, O.F.M., Center for Action and Contemplation, Albuquerque, New Mexico

"Finally someone has put the emergence conversation in the wider historical context it deserves--showing how what is now emerging owes so much to contributors over the last century, from Walter Raushenbusch to Johann Baptist Metz, from Dorothy Day to Mary and Gordon Cosby, from Azusa Street to Taizé and Iona to Buenos Aires. Phyllis Tickle gets it right and conveys it beautifully, so more and more readers can be a part of it . . . with a clearer understanding of what 'it' is!"--Brian D. McLaren, author/speaker/networker

"What a fascinating read! A page turner! I read through each story with anticipation as I eagerly awaited the next set of connections Phyllis Tickle would make between seemingly unrelated people, movements, faith, and culture. Never in one volume have I seen such a diverse set of Christian movements not only listed but analyzed for their meaning as it related to the bigger picture. As we have come to expect, Tickle has done her homework, and the result is a unique contribution to the conversation about what Christianity has and will become in the twenty-first century."--Ryan Bolger, associate professor, Church in Contemporary Culture,
Fuller Theological Seminary

"Take a heart practiced in faith and trust in God. Add the mind of a finely trained historian and the eye of a keen observer of religion. Add gifted writing, unfailing bluntness, and deep wisdom, and you get Phyllis Tickle. These pages offer you nothing less than the future of the church, chronicled by an author who welcomes this 'great emergence' without an ounce of fear. It's a story you can't afford to miss."--Philip Clayton, dean, Claremont School of Theology

"The communities of Emergence Christianity form an often confusing and tangled mess of theology, culture, and technology. Phyllis steps into all of this with a keen and discerning eye that is part art critic, part historian, and part local bartender: In her latest book she lifts up the beautiful and the hopeful. She teaches with expert authority and a clear, simple style, all while serving up an eclectic mix of the most fascinating people, communities, and practices of twenty-first-century Christianity."--Neal Locke, 1st Presbyterian Church of Second Life

"The elegance of Phyllis Tickle's writing provides beautiful context for the comprehensiveness of her analysis: she has a bird's-eye view of what's happening to, in, and through a new kind of Christianity. She helps us integrate in our minds what God has already integrated in the world: a way of being Christian that transcends sacred-secular constructs, challenges unearned privilege, and does not refuse light from any quarter. Emergence Christianity lets us into a secret that could do with being shouted from rooftops: we are all one, we need each other, and no matter the stream of Christianity you happen to feel most distance from, there's a gift waiting to be revealed when human beings open themselves to change. If you want to know how the old and the new fit together, look no further."--Gareth Higgins, executive director, Wild Goose Festival

"What a fascinating read! Phyllis Tickle tackles Emergence Christianity once again. In this volume, she takes the conversation further, filling in all the details and answering the who, what, where, why, and how of the movement. A page turner, I read through each story with anticipation as I eagerly awaited the next set of connections Phyllis Tickle would make between seemingly unrelated people, movements, faith, and culture. Never in one volume have I seen such a diverse set of Christian movements not only listed but analyzed for their meaning as it related to the bigger picture. Decade by decade, she walks us through the 20th century, tracing the roots of Emergence Christianity. No one gets left behind here: we read about Pentecostalism, house churches, Taize, Vatican II, liberation theology, Orthodox spirituality, the Vineyard, to name a few. She brings her analysis all the way up to the present day, describing the current movements of emergence such as emergent village, neo-monasticism, and new calvinism, and others. Throughout her work Tickle helps make a vast amount of stories intelligible, and she seems to do it effortlessly. As we have come to expect, Tickle has done her homework, and the result is a unique contribution to the conversation about what Christianity has and will become in the Twenty-first century."--Dr. Ryan Bolger, PhD, associate professor, Church in Contemporary Culture, Fuller Theological Seminary

"Emergence Christianity is a loving yet fierce survey of Christianity in postmodernity. Tickle manages to tell the truth about who the church was, is, and is becoming with great affection and clarity."--Rev. Nadia Bolz-Weber, founding pastor, House for All Sinners and Saints, Denver, Colorado

"If you believe that Christianity is undergoing a great transformation, this is a crucial book; many Christians, liberal and conservative, should be intrigued."