Design on a Crime 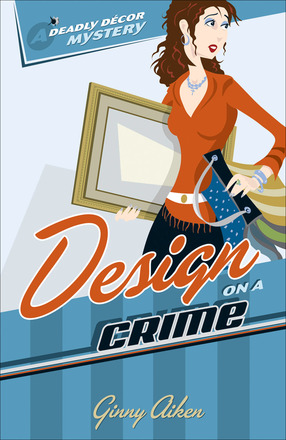 Haley Farrell is taking a chance on herself. After receiving her interior design certificate, she quits her job at the local furniture store and decides to open her own interior decorating business. But with all the advantages of her new career-meeting new people, and decorating new and old homes-comes a huge pitfall. Her new job allows her access into her clients' homes and their lives . . . but also their deaths.

When Haley's mentor, Marge Norwalk, is murdered, Haley becomes the prime suspect. Armed only with the confidence that Marge instilled in her, Haley sets out to find the real murderer. But as she sets forth, she has no idea what twists and turns will bring her face-to-face with her long-hidden past.

Book one in the Deadly Décor Mysteries will keep both Ginny Aiken's established readership and new fans coming back for more.

"Ginny Aiken has a beautiful ability to mingle comedy with tragedy, making the reader laugh and cry almost in the same breath. Design on a Crime is written with skill and sensitivity."--Hannah Alexander, author, Last Resort and Note of Peril

"Haley Farrell in Design On A Crime had me laughing. Design On A Crime is a well done, first person mystery. I look forward to reading more from Ginny Aiken and eagerly anticipate Decorating Schemes coming in 2006." --Allison M. Wilson, Road to Romance

"This murder mystery has an un usual twist... the main character, who is also the person telling the story, is an interior designer and is a suspect in the murder of her very dear friend, who happens to also be an owner of another successful design firm. The suspect, Haley Farell, carries with her a shroud from her past that isn't revealed until you are well in to the novel. You will find that this is an enjoyable read."--1340mag.com