Deep in the Heart of Trouble 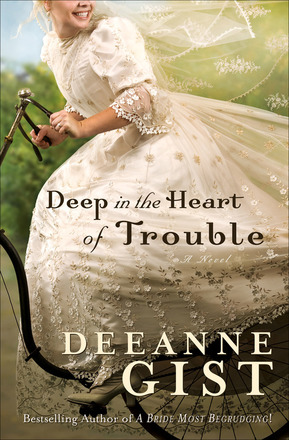 A Texas-Sized Tale of Unexpected Love
Essie Spreckelmeyer is the last woman anyone in Corsicana, Texas, expected to see with a man on her arm. Independent and outspoken, she's known more for riding bicycles in outrageous bloomers than for catching a man's eye.
And the last man who seems willing to give her a second glance is Tony Morgan, newly hired at Spreckelmeyer's oil company. The disinherited son of an oil baron, Tony wants most to restore his name and regain his lost fortune--not lose his heart to this headstrong blonde. She confounds, contradicts, and confuses him. Sometimes he doesn't know if she's driving him toward the aisle or the end of his rope.
That's how life is...Deep in the Heart of Trouble

"This Christy award-winning author does not disappoint... Readers will hold their breath as passions are flared, limits are crossed, and secrets are revealed."
--Romantic Times (on Courting Trouble)

"Essie's journey is touching, funny, and refreshingly atypical of the romance genre. Her faith and fearless determination will warm the hearts of readers who enjoy gentle historicals."
--Library Journal (on Courting Trouble)

"This sequel to Courting Trouble returns to Corsicana, TX, where unlikely heroine Essie Spreckelmeyer has just won the Best Bicycle Costume Award of 1898. Essie is still outspoken and stirring up trouble wherever she goes. When Tony Morgan, the disinherited son of an oil baron, takes a job with Essie's family oil business, sparks fly. Essie's independent nature and refusal to take a backseat in a man's world have long kept her single, but Tony may be just her match. Christy Award winner Gist's historical romances have increasingly gained popularity, combining witty dialog, well-balanced plots, and fully developed characters who seem almost real. Recommended for CF and romance collections." --Library Journal

"Ms. Deeanne Gist has once again written a delightfully humorous historical romance. After reading the first book in this series of two, I was anxious to get my hands on this one. Let me tell you, I was not disappointed. Ms. Gist has done a great job of creating her characters so that the reader can feel part of their lives. Essie has learned some new tricks, but Tony was new to Essie's world. Not only was the primary couple fabulously written, so were the supporting cast. Her father, the young people, and the older women of the town were all incredible and superbly written.... It is a spectacular, feel-good story which I highly recommend. You will definitely be glad you read it." --Brenda Talley, TheRomanceStudio.com

"Deeanne Gist has written a romance that will touch your heart. Her research into the early oil industry is impeccable. Essie and Tony's story has inspiration, a little mystery and a lot of romance. The characters struggle between being human and waiting on God's direction. This is the same struggle that most of us have when our human emotions get in the way of God's plans.
Deep in the Heart of Trouble wraps up Essie's story very nicely. It has a little bit of everything, a well rounded story that will make you laugh, cry and cheer for Tony and Essie. If you liked Courting Trouble, you'll love the sequel." --Trudy Smith, OnceUponaRomance.net

"Full of fun, romance and lively characters, the plot moves forward at a pace that kept me turning the pages. With each new book, Deeanne Gist earns her place on my list of favorite authors." --Tina Helmuth, TheChristianManifesto.wordpress.com

"Gist does it again! Her signature prose is consistent and she delivers a thoroughly delightful and entertaining story that's worthy of our time and attention. Not only won't you want to put this book down, you'll want to enjoy this story again and again." --Romantic Times BOOKreviews

"Essie Spreckelmeyer, in her mid-thirties, has accepted her spinsterhood, but she is not the stereotypical spinster of the era in which Deeanne Gist's Deep in the Heart of Trouble is set. For a woman of the end of the nineteenth century, Essie is independent and outspoken. She organized the Corsicana Velocipede Club, and she has taught the cyclists how to shoot. Co-owner with her father of Sullivan Oil, she is the one who really runs the business. When her father hires a former employee of a competitor without Essie's approval, she is upset, and the novel's conflicts begin.

"Essie does not know that Tony Bryant, the new employee, is the disinherited son of the recently deceased owner of the other oil company. As the reader might expect, Essie and Tony fall in love. However, as they begin to make plans to marry, more trouble erupts to threaten their relationship and Tony's life.

"The daughter and wife of Texas oilmen and a former resident of Corsicana, Gist is well qualified to write about the situation that forms the background of her novel. If one wants some light reading but also a story that shows the difficulties encountered in human relationships and how dependence on God helps solve them, Deep in the Heart of Trouble will satisfy both wants."
--Beverly M. Bixler, Congregational Libraries Today

"In the late eighteen hundreds in a Texas oil town lives a charming little old lady meddler who is sure you can learn all you need to know from romance novels. With a lovely, rich, intrepid heroine and a strong, poor, handsome hero, this is a story of faith, love and bold action. Colorful characters add to the richness of the story--sherrifs, oil magnates, lowly workers, pastors and club ladies--engaging the reader in a non-traditional storyline."
--MS, Libraries Alive

"In Gist's fresh, funny historical, Essie Spreckelmeyer is too busy to worry about becoming the town spinster, but when Tony Bryant shows up in Corsicana, she realizes that there might be room in her life for romance, too."
--John Charls and Shelley Mosley, Booklist, September 15, 2008