Learning from the Psychology of Ancient Monks 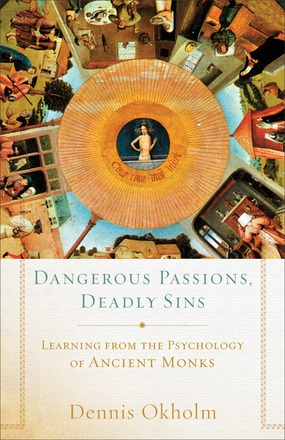 This volume unpacks the psychological insights found in the writings of three early monks--Evagrius Ponticus (fourth century), John Cassian (fifth century), and Gregory the Great (sixth century)--to help us appreciate the relevance of these monastic writers and apply their wisdom to our own spiritual and psychological well-being. The book addresses each of the seven deadly sins, offering practical guidance from the early monastic tradition for overcoming these dangerous passions.

As Dennis Okholm introduces key monastic figures, literature, and thought of the early church, he relates early Christian writings to modern studies in psychology. He shows how ancient monks often anticipated the insights of contemporary psychology and sociology, exploring, for example, how their discussions of gluttony compare with current discussions regarding eating disorders. This book will appeal to readers interested in spirituality, early monastic resources, and ancient wisdom for human flourishing, as well as students of spirituality and spiritual formation.

"Okholm is both a careful and a broadly informed student of his subject, and the result of that happy combination is as intriguing and informing an overview of human foibles as I have ever seen. Pastoral as well as informative--in places even gentle--Dangerous Passions, Deadly Sins gives us a theology both of human frailty and of the full panoply of yearnings resident in us as a species. In effect, it also gives contemporary psychology and especially Christian counseling their deep history by paralleling the contemporary with the ancients of the faith."

"Okholm's book is a welcome addition to the burgeoning literature on the deadly sins. He is a close reader of the ancient sources and puts them into conversation with modern psychology without being reductive. A perceptive study, engagingly written, with a nice pastoral tone."

"Dennis Okholm sets his treatment of the seven deadly sins in conversation with ancient monastic wisdom, godly psychological principles, and biblical truth. In so doing, he does not merely condemn vice but gently commends virtue and prayer to accompany us on a journey to the heart's true home: a life derived from and lived in the kingdom of God. It only takes a quick look at the news headlines or our interpersonal relationships to know that a fresh word on ethics is needed. I recommend Dangerous Passions, Deadly Sins to anyone searching for such a word."

"Dennis Okholm's Dangerous Passions, Deadly Sins is a tour de force of early Christian monastic psychology and theology. Okholm does not ride roughshod over the modern psychological movement but instead shows the ways in which it has failed to truly find its rootedness in the historic Christian tradition. Okholm knows that there is much to learn from the likes of John Cassian, Evagrius of Pontus, and Gregory the Great, and he has judiciously analyzed aspects of this heritage and engagingly presented them to the modern reader. This book should certainly be read by every psychologist, theologian, and practitioner of spiritual formation."

"Dennis Okholm--scholar, teacher, pastor, and spiritual guide--humbly and clearly brings the psychology of ancient Christian monks into conversation with contemporary psychological science and ordinary experience, inviting his readers to a disciplined, grace-reliant life. Evagrius, Cassian, and Gregory the Great prove to be wise interlocutors for those who want to live reasonably and faithfully in today's sex-saturated, self-esteem-fixated, consumerist society, which forms and informs us with thoughts very much like those that Evagrius wrote about. It is fashionable to make light of the 'seven deadlies,' but they are still lethal. This book offers antidotes."

"Dangerous Passions, Deadly Sins is written by a theologian and should be read by theologians, but psychologists ought to read this book also. Dennis Okholm both informs and critiques contemporary psychology by exploring the rich wisdom found throughout centuries of Christian thought. He challenges psychologists to consider that morality has a place in contemporary discourse about mental health and does so in a way that brings hope and inspires us toward virtuous living."

"According to the Christian tradition, sin has seven deadly forms. Okholm has written a wise, accessible introduction to these forms that brims with insights from the church fathers and enough anecdotes and personal transparency to make it a practical and profitable read. This is a terrific example of Christian psychology."

"This book is an excellent example of the kind of 'spiritual theology' that authors like Eugene Peterson and Diogenes Allen have long implored scholars to pursue and produce. There are several features about this book that commend it to an audience of educated lay readers. First, it is obvious that Okholm has read the masters. . . . He is equally adept at shifting his focus to modern psychologists and cultural critics. The interaction between these two kinds of sources is useful, often insightful, and sometimes amusing. . . . Second, Okholm clarifies terms, never assuming that his readers know the language of the experts. . . . Third, he examines modern values and habits in light of the ancient category of the deadly sins, often with devastating insight. . . . Finally, he devotes a chapter to each of the deadly sins, providing fascinating detail along the way, yet he shows at the same time how interconnected they are. . . . This book would be useful in a college course, reading group, and sermons series. Its greatest strength is the ease with which it moves between the ancient world and the modern world, demonstrating that these two worlds share more in common than we might assume. There is much we can learn from the ancient monks. Okholm makes that winsomely clear."

"[A] well-crafted book. . . . Okholm's careful research, clear exposition, and extensive annotations bring to light the extraordinary wisdom found in the writings of the early ascetic theologians. . . . Counselors, clergy, and serious Christians need to become better informed with the fertile and fruitful insights of the early Christian monks and ascetics regarding the care and nurture of the undying soul. The book will serve as an invaluable resource for teaching and preaching on the perils of the seven deadly sins."

"Wisely and importantly, Okholm does not conflate the ancient and modern analyses, but pays attention to the convergences, intersections, and resonances between them. He also notes important distinctions and differences in definition, analysis, treatment, and goal. The juxtaposition, though, makes the ancient psychology matter today and brings the modern human and social condition into sharper focus. . . . This book is instructive, illuminating, engaging, and challenging. The reader will come away with a basic and clear grasp of the ancient understanding of the seven deadly sins. What is more, one will be persuaded of its relevance beyond ancient monasteries. . . . Okholm's engaging style and just the right amount of authorial presence contributes to the persuasiveness of the argument. . . . Perhaps evidence of the real success of Okholm's study is that this reader was constantly brought to examination of conscience. I suspect others would be as well."

"Okholm has written an interesting and thoughtful book on the psychology of the Christian monastic tradition. . . . This book is very well written and extensively documented. Okholm is clearly a careful and thorough scholar. . . . But more than being a fine scholar of the ancients, I thought Okholm did an excellent job at presenting this material, which can be confusing to moderns, in a readable and clear manner. . . . Dangerous Passions, Deadly Sins is a thoughtful, thorough, and careful explanation of the wisdom of the early Christian monastic tradition, with many wise insights and helpful guidance for those of us who struggle with similar problems these days."

"Okholm is an Episcopal priest in Southern California, as well as a Systematic Theologian who teaches at Azusa Pacific College and Fuller Seminary--a combination of head and heart that serves his readers well. And while he's neither a trained psychologist nor a counselor, Okholm is a Benedictine oblate, a serious student of the early monastics, and an astute observer of sin. . . . A highly useful tool for understanding sin in our own lives, and in our culture. In a tone that is gentle but frank, it's full of useful observations and counsel, from both the ancients and the moderns. . . . There's a strong pastoral and devotional impact to this volume, and while it's aimed at Christians who assume that sin is essential to address, a great deal will be useful to all students of the soul."

"A remarkable, learned, thoughtful book that can help the church universal. . . . [It] does what few books do well: bring[s] the ancient insights of the church Fathers and Mothers into dialogue with modern authors and our postmodern milieu. This really is a book about how the ancients viewed the seven deadly sins, and it may be the most magisterial book on this topic yet."

"As a student of the monastic movement and ancient spirituality, I can appreciate the many insights that Okholm brings from the writings of the three saints of old [Evagrius, Cassian, and Gregory]. . . . [His] point about using ancient spiritual remedies for modern psychological challenges is relevant, practical, and very holistic. Kudos again to Dennis Okholm!"

Panorama of a Book Saint blog