Restructuring the Grammar of Christology 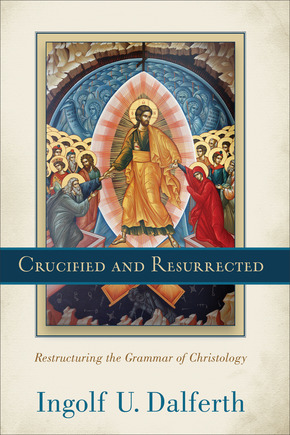 This major work, now available in English, is considered by many to be one of the finest and most significant contributions to modern Christology. Preeminent scholar and theologian Ingolf Dalferth argues for a radical reorientation of Christology for historical, hermeneutical, and theological reasons. He defends an orthodox vision of Christology in the context of a dialogue with modernity, showing why the resurrection, not the incarnation, ought to be the central idea of Christological thinking. His proposal is both pneumatological and Trinitarian, and addresses themes such as soteriology, the doctrine of atonement, and preaching.

Contents
Translator's Preface
Preface to the 2015 English Edition
Preface to the 1993 German Edition
1. Incarnation: The Myth of God Incarnate
2. Cross and Resurrection: The Word of the Cross
3. Jesus Christ: Fundamental Problems in Constructing a Christology
4. Trinity: The Theological Relevance of the Cross for the Idea of God
5. Atoning Sacrifice: The Salvific Significance of the Death of Jesus
Indexes

"Crucified and Resurrected is a work of rare distinction, offering a penetrating analysis of the elements and entailments of the Christian confession of the resurrection of Jesus Christ. Its anatomy of Christology is undergirded by a sense that the beauty and significance of Christian thought and practice derive from the uniqueness of their object. This is theological reflection of a very high order, whose appearance in English is warmly to be welcomed."

"This admirable translation makes Ingolf Dalferth's already-classic christological work on cross and resurrection available in English for the first time, with a new preface that situates it within the trajectory of the author's developing thought. What we have here is a study that returns us to the startling novelty of early resurrection belief and from there penetratingly expounds the 'grammar' and gift of its christological implications. A profound, original, and challenging account."

"With this book, now available in English as Crucified and Resurrected, Ingolf Dalferth has propounded a conception of dogmatic Christology that attempts to take the problems and requirements of modernity into account. Dalferth follows Eberhard Jüngel's hermeneutically oriented Christology and, with the help of analytical philosophy, carries it further in terms of trinitarian theology. The doctrine of the Trinity unfolds the act of faith as a concrete hermeneutical event. In this way, Christ comes into view as an image of faith involved in history. Christology is thus not one theological theme alongside others; it is the grammar of the Christian faith."

"[An] important study. . . . The book represents an impressive and strikingly pastoral engagement with contemporary christological discussion, drawing the reader through the significant christological debates of the last century towards Dalferth's own resolutions, in a way that is always attentive to the implications of theological method and of the dogmatic task's architectural dimensions: issues must be aligned and proportioned rightly, if they are to be understood properly."

"If Christian language is Christian just insofar as it takes its bearings from Jesus Christ, then there is a sense in which everything Christians say is Christology or Christ-talk--even when Christ is not being mentioned. Taken in that ample sense, Christology would embrace the whole gamut of topics that are usually discussed in Christian dogmatics or systematic theology. Such is Ingolf Dalferth's impressive enterprise in Crucified and Resurrected. . . . [Dalferth believes] the more or less standard way in which Western Christianity has understood and spoken of Christ's death is very problematic. Dalferth addresses the problem in the context of his . . . comprehensive project. The comprehensiveness is not optional; a more restricted approach could not do justice to the subject matter of Christian language, which is a complex, interconnected whole."

"Dalferth stands in the tradition of Karl Barth and Eberhard Jüngel; his critical reason consists in entering into evangelical language and closely examining the coherence of the elements of Christian self-understanding. His unfolding of the internal logic of Christian faith is brilliant. His many sub-treatises on christological and trinitarian topics are intricate and enlightening. Finally, we owe a debt to the translator, Jo Bennett, for the book's clear theological English."

"This book, a foray into Christology by an internationally recognized scholar, merits widespread attention. . . . For the contemporary world, [Dalferth's] Christology has a vibrancy that can impel the preaching of Jesus Christ not only as example but primarily as gift."

"A rich and interesting contribution to the doctrine of the atonement. The fundamental spirit of the work is a consistent determination to allow the doctrine of God, particularly via the doctrine of the resurrection, to shape the key features of Christ's saving work. This alone makes it a counterbalance to many contemporary works. Dalferth's insight carries with it the added benefit of offering what amounts to a primer in Christian doctrine, as it works through major doctrines through their relationship to the work of Christ."