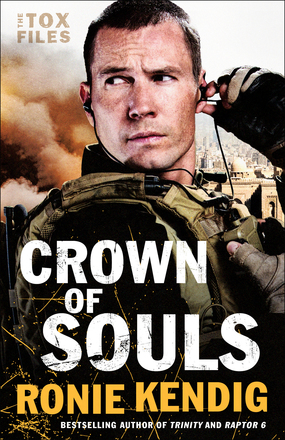 When You Stare Into the Abyss It Also Stares Into You

The bullet that rips into Cole "Tox" Russell was never meant to kill. It was meant to send a message. Only one man is skilled enough to have taken the shot, a rogue Special Forces operator who vanished months ago.

Alec King is perhaps the only person as skilled as Tox, and he's out for justice. Furious with orders that got his men killed, he intends to make those responsible pay. And he insists Tox join him, believing they are the same breed of soldier.

Afraid his old friend could be right, Tox battles a growing darkness within himself as he and his team are forced into another deadly encounter with antiquity. It appears Alec is harnessing the power of a mysterious artifact, a crown that history has linked to some of the worst slaughters in humanity. Racing to stop Alec before his vengeance is unleashed, Tox must fight the monster without becoming one.

Praise for The Tox Files

"This is a thrill ride with a story that barely stops to catch its breath before the action revs back up again. . . . Kendig has out done herself." RT Book Reviews Top Pick

"In the riveting second book in Kendig's The Tox Files series, Cole "Tox" Russell is back and trouble seems to have found him again. In this action-packed page-turner, readers will be taken around the globe in another heart-stopping race against time to stop a madman. Tox is an exceptional hero, and his teammates are strong supporting characters. . . . Fans of Dan Brown need to give this series a try as there are interesting historical and biblical elements amongst the mystery. It's clear that an impressive amount of research has gone into this series. Highly recommended."