Documents Illustrating the History of the Church, AD 337-461 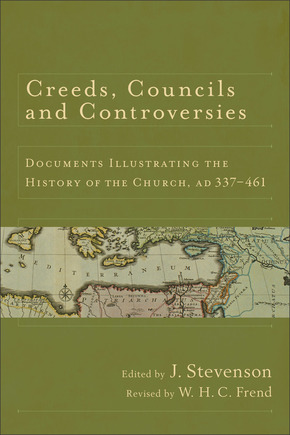 "A brilliant mosaic of early Christianity."--William Harmless, author of Augustine in His Own Words

This sourcebook of primary texts illustrates the history of Christianity from Nicaea to St. Augustine and St. Patrick. It covers all major persons and topics in the "golden age" of Greek and Latin patristics. This standard collection, still unsurpassed, is now available to a wider North American audience.

"This collection of documents from the world of early Christianity is not only handy but also enlightening. Here one has immediate access to ancient words on Gnosticism and Arianism, baptism and persecution, and canon and controversy. Here, in the antique, one may find something rare, something lovely, something new."--D. Jeffrey Bingham, associate dean of biblical and theological studies, Wheaton College

"Professors of early Christianity will enthusiastically welcome the reprinting of these two extremely well-selected and unsurpassed collections of documents [A New Eusebius and Creeds, Councils and Controversies]. These two textbooks have long set the standard for collections of original documents illustrating the practices and thought of early Christians. It is extremely useful for those who teach this period to have these texts back in print."--Kevin Madigan, Winn Professor of Ecclesiastical History, The Divinity School, Harvard University

"J. Stevenson's classic two-volume compilation, A New Eusebius and Creeds, Councils and Controversies, assembles snippets from a wide range of hard-to-find materials: acts of Christian martyrs, conciliar documents, fragments from heretics and persecutors, inscriptions on coins and catacombs, snatches of gossip in scattered letters. The final result is a brilliant mosaic of early Christianity."--William Harmless, author of Augustine in His Own Words

"Stevenson and Frend's excellent primary source reader opens up a window to the formative years of the Christian faith. . . . The source documents included in Creeds, Councils and Controversies begin chronologically just after the polarizing Emperor's death [Constantine] and stretch up through the life of the famous missionary Patrick of Ireland. What lies between is the real treasure of Stevenson and Frend's work--a fascinating look not only at those writings that became the bedrock of Christian belief, but also at some of those heretical ideas that forced the church to reassess and formulate positions that subsequently became orthodoxy. . . . As a presentation of the writings that helped to direct and orient the early church, Creeds, Councils and Controversies is perfectly suited for undergraduate and seminary students in the classroom. . . . A valuable resource that affords its reader a much better understanding of the development of Christian thought in the fourth and fifth centuries."

"The student of the history of the Church faces an arduous task: he or she must read widely in close to two thousand years of Christian historical texts and must also have an awareness of the global reach of the faith, especially in the past two hundred years or so. Sourcebooks are an indispensable aid for such an endeavor, and church historians in the last fifty years or so have been well served by a number of standard readers like [this one]. . . . Stevenson's and Frend's selection is an excellent tool for the study of the Church's theology and experience in late antiquity."