The Theological Basis of Human Freedom 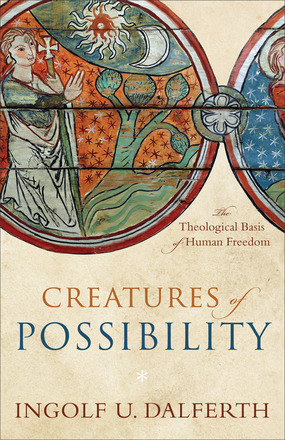 A Prominent Theologian Explores What It Means to Be Human

Preeminent scholar and theologian Ingolf Dalferth offers mature reflections on what it means to be human, a topic at the forefront of contemporary Christian thought. Dalferth argues that humans should be defined not as deficient beings--who must compensate for the weaknesses of their biological nature by means of technology, morals, media, religion, and culture--but as creatures of possibility. He understands human beings by reference to their capacity to live a truly humane life. Dalferth explores the sheer gratuitousness of God's agency in justifying and sanctifying the human person, defining humans not by what we do or achieve but by God's creative and saving action. In the gospel, we are set free to interact with the world and creation.

Contents
Preface to the 2016 English Edition
Preface to the 2011 German Edition
1. From Deficient Being to Beings of Possibility: An Introduction
2. Of Humanity and God: The Perspective of Reason and the Wider Perspective of Faith
3. Mere Passive: The Passivity of Gift in Luther's Theology
4. All for Nothing: On the Art of Giving and the Limitations of Gift
5. Self-Offering: From the Act of Violence to the Passion of Love
6. Becoming Human: Compensation for a Deficiency or Excess of Love?
7. Creative Passivity: The Self-Belittlement of Human Beings
Indexes

"Few Protestant theologians today write with the authoritative grasp of the theological tradition that Ingolf Dalferth demonstrates in Creatures of Possibility. Fewer still are capable of bringing this tradition into such an extensive constructive and critical engagement with contemporary thought. Through a series of expositions of Luther, Marion, Derrida, Blumenberg, and Nietzsche, Dalferth shows that the Christian account of human beings as fundamentally passive is so far from being a conservative recoil in the face of modernity's promotion of autonomous rational agency as to be, instead, the founding charter of our creaturely creative possibilities. Creatures of Possibility will surely prove essential reading for anyone concerned with theological anthropology."

"With impressive conceptual precision and insight, Dalferth explores how being created by God invites a deeper appreciation of human giftedness, possibility, and becoming. Christian faith is not a response to an experience of lack; instead, it is an exciting way (initiated by God) to relate to God, God's creation, my fellow human beings, and my own emerging self in this world. This is truly engaging theology."

"In this brilliant and provocative study, Dalferth argues against the dominant (and tired) view of human nature as deficient to courageously reimagine what it means to be human in terms of possibility."

"A fresh and provocative perspective on human beings as creatures of passivity who are open to a future of possibilities. . . . This book is a work of intriguing philosophical and theological argumentation that attempts to overturn both the classical philosophical and theological understandings of the human being as a rational animal, and the modern understanding of the human as either a highly evolved animal and/or anxiety-induced, indeterminate wilful animal. Dalferth rightly replaces these reductionist accounts of the human with a more theologically holistic and innovative rendering of the human being as a creature of possibility that avoids the excesses of both classical and modern views of anthropology. Dalferth's prose is lucid and precise and his theological acumen is exemplary. He summarizes his interlocutor's arguments well and then exposes them as ultimately insufficient for and incompatible with the perspective of the human from the standpoint of Christian faith. I am grateful for Dalferth's retrieval of the human from purely secular paradigms--whether philosophical or biological--and resituating the doctrine of humanity within the realm of the doctrine of God."

"Dalferth is a German theologian whose work is increasingly translated into English, with the result that many more readers benefit from his profound insight into the relationship between theology and philosophy. In this volume, Dalferth offers a deeply thoughtful theological anthropology that is informed by a rich, versatile reading of key sources and figures, especially Martin Luther and (somewhat between the lines) Immanuel Kant. His reflections draw upon an array of insights into particular categories of thought and doctrinal claims. . . . The strength of the book lies in the boldness and comprehensive scope of the individual chapters. Dalferth has clear ideas that are forcefully made and with few exceptions persuasively expressed. . . . On every page, Dalferth intrigues the reader and sets for us the serious task of thinking about the question 'Who are We?' with verve and boldness. This is the most arresting book in theological anthropology that I have read in years."

Journal of Biblical and Theological Studies

"A fascinating work of theological anthropology from one of today's most distinguished theologians. . . . Creatures of Possibility is a work of Lutheran theology in the sense that it expounds and interprets several anthropological insights of Martin Luther. Nevertheless, the text is rich in engagement with broader philosophical and theological literature on the nature of the human person. . . . The writing style is dense and the argument sometimes circuitous, but there are many moments of piercing clarity about the nature of the human person."

Journal of Markets and Morality