Transforming Culture from Where You Are 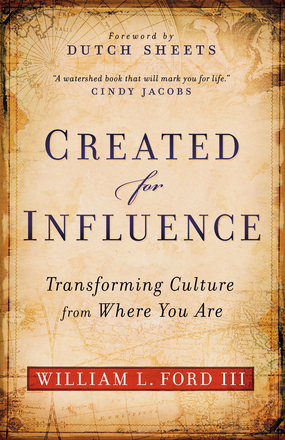 We are being called to a higher realm of influence.

The church today is uniquely positioned to influence the culture around her. But Christians are walking away from this opportunity, this responsibility, in favor of building a separate, "safer" culture of our own.

Yet we've been given the tools to break personal strongholds and change the course of nations. Now revised and expanded, Created for Influence, shows how you can do this--and transform culture right where you are. Sustained prayer can release kingdom influence everywhere, from your own home to governments and judicial systems. It can undo demonic assignments and break the bonds that hold lives and nations captive.

This revolutionary book is calling you from a spot on the sidelines to a position on the front lines. It's for believers who are ready to join the fight and grip the heart of God in prayer.

Are you ready to transform history?

Created for Influence is a watershed book that will mark you for life. Its principles will cause you to shift into a new paradigm in your thinking. If you put what Will teaches into practice, you will release success in every part of your life.

When Will began sharing with me the revelation God was giving him about influence, I knew immediately it would become a book. The material was far too rich and insightful not to be shared with a broader audience. You now have the privilege of partaking of this important and helpful information. The journey will be a pleasurable and fulfilling one!

My friend Will Ford rightly captures a most important yet widely neglected reality: godly influence. If we study the heroes of the Bible, we see that most received the gift of influence and used it to transform their world. I pray that all who are in or aspire to positions of influence will read this excellent book.

With brilliant insight, my friend Will Ford unveils the true nature of how supernatural influence is wielded and even thwarted, and how godly influence can shape personal and national destinies when we understand how to partner with God. This book is written with revelation that inspires me. If the praying Church can, like Esther, influence the King of heaven, then heaven has no trouble influencing earthly kings. After reading Created for Influence, I have a greater desire to be a like a star in the heavens instead of a mere celebrity on earth (Daniel 12:3)!

Several years ago the Lord swept me through the glass doors that separate secular thinkers from religiously defined preachers. Unprepared, I did the best I could to seize my moment to speak to our culture through secular newspapers, radio and television, instead of the pulpit alone. Today I realize that God had given me a unique gift of influence. If only I had read Will Ford's book before my big moment came, I could be further along in my journey of social impact on our culture. This book plumbs the depths of fresh scriptural concepts with biblical authority, while giving us modern examples of winners who have used their influence well. If you are expecting God to use you in a mighty way, this book is a must-read. For the sleeping Church, this book should come with a label: May be hazardous to your complacency!