Divine Action, Human Cognition, and the People of God

by: Joel B. Green 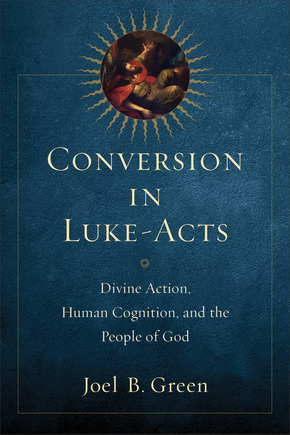 Repentance and conversion are key topics in New Testament interpretation and in Christian life. However, the study of conversion in early Christianity has been plagued by psychological assumptions alien to the world of the New Testament. Leading New Testament scholar Joel Green believes that careful attention to the narrative of Luke-Acts calls for significant rethinking about the nature of Christian conversion. Drawing on the cognitive sciences and examining key evidence in Luke-Acts, this book emphasizes the embodied nature of human life as it explores the life transformation signaled by the message of conversion, offering a new reading of a key aspect of New Testament theology.

"Joel Green takes our understanding of repentance and conversion in Luke-Acts, and indeed the whole New Testament, to a new level of methodological sophistication. He delves into important aspects of modern cognitive studies and theory as a tool for understanding human experience and concludes that repentance/conversion (rightly regarded as synonymous) must be viewed as a holistic, embodied phenomenon. Green thus rejects William James's psychological approach to conversion and the widespread but generally unconscious assumptions of Cartesian dualism (the mind-body polarity), arguing that both perspectives have contributed to the distortion of a proper understanding of conversion in the New Testament. Green also correctly emphasizes that conversion is not just a once-for-all experience but rather constitutes the beginning of a lifelong journey within the context of the faith community."

"Joel Green offers a provocative and uncommonly helpful analysis of a subject that has become increasingly important. This challenging topic requires command of multiple disciplines, and Green draws skillfully and wisely from an array of exegetical methods and the cognitive sciences. Conversion in Luke-Acts displays the author's customary elegance of method, creative insight, and lucid presentation as he opens up for readers fresh ways of thinking about Luke's two volumes as well as the meaning of religious conversion and its embodied enactment in a lifelong journey shared with a community of others and marked by a set of sustained practices. I enthusiastically recommend this work!"

"Joel Green offers a fresh account of conversion in Luke-Acts that is exegetically fruitful and eminently readable. Green's cognitive approach expertly explores the communal, embodied nature of Lukan conversion and examines passages both expected and unexpected along the way. Students and scholars alike will find Green's navigation of Luke's narrative theology of conversion a welcome read."

"Joel Green shows that Luke's understanding of what we call 'conversion' involves not merely a change in thinking or of opinion but an entire reorientation of life, connected both with God's summons to his people in earlier biblical history and with a need for perseverance. This is a decisively fresh work on a vital topic."

"Green combines exegetical skill and theological insight with findings from the field of
cognitive science to explore the concept of conversion in the Gospel of Luke and the Acts of the Apostles. . . . This book is written for an academic audience, but its message is for the church. Thus, it would be an excellent choice for seminary courses, pastoral counselors, and lay leaders."

"Green offers an insightful take on Luke's understanding of conversion by using a cognitive and holistic approach. Conversion in Luke-Acts is an important contribution to Lukan studies as well as understanding 'conversion' in antiquity. . . . Green develops his argument step-by-step, developing a definition of conversion that emphasizes personal embodiment and the journey of conversion of the people of God. By embracing a holistic sense of conversion, this book effectively opens up new ways of framing conversion. The emphasis on a community of embodied people seeking God's aims is innovative. Moreover, it elucidates some perplexing texts such as the case of Simon Magus. . . . This book is fascinating and is highly recommended for students of the New Testament or those interested in conversion."

"This study drawn on the cognitive sciences to offer a fresh analysis of Luke's theology of conversion. . . . Even as Green forges a new approach for studying conversion, his conclusions emerge from masterful exegesis of Luke-Acts. Herein lies one of the greatest strengths of the book. Rather than dismantling Luke's narrative theology or imposing alien concepts onto the txt, Green's interdisciplinary method produces a highly nuanced reading of Luke-Acts. Besides calling attention to otherwise neglected aspects of conversion, this approach invites readers to respond more faithfully to Luke's story. . . . Green's study provides a penetrating analysis of conversion in Luke-Acts. The book will serve well as a secondary textbook for college or seminary classes and as an important resource for church leaders. All those interested in Luke-Acts and conversion will benefit greatly from this insightful and very accessible work."

"New Testament scholars readily agree that 'conversion' is emphasized in Luke more than in any other of the gospels. . . . However, there is less agreement among them about what constitutes 'conversion.' Joel Green . . . draws on his expertise in Luke-Acts and his interest in cognitive studies to build a more profound definition of what is involved in an experience of conversion. He emphasizes that conversion entails redirecting one's life journey and is expressed not simply in intellectual terms but in fidelity to the Christian community and its practices--an understanding of conversion exemplified in Luke's account in the gospel and Acts."

"Green's ability to weave together multiple disciplines into a fresh argument on conversion in Luke-Acts, while demonstrating the value of interdisciplinary work, is commendable. . . . Readers interested in Luke-Acts, conversion, and/or cognitive studies will . . . find much value in this work."

"Green combines his special interests in Luke-Acts and neuroscience and applies these interests to the concept of conversion. Green reexamines familiar texts throughout and stimulates further reflection on what it means to 'turn to the Lord.'. . . Green has once again treated us to a stimulating and thought-provoking analysis of texts in Luke-Acts. . . . Green has certainly moved the discussion of . . . neglected themes in Lukan studies forward, and this book is sure to stimulate further conversations about conversion in Luke-Acts."

"Green provides a fascinating and helpful contribution to the study of conversion in Luke-Acts, as well as a model for using an interdisciplinary method to approach familiar texts."

"Green presents the reader with a helpful orientation to the study of conversion in Luke-Acts and a window into a growing field of scholarship that has come about through the combination of biblical studies with cognitive neuroscience. His examination of Luke-Acts is both thorough and innovative. He lays out clearly his methods and the scientific concepts he utilizes throughout the work, making it a useful tool for anyone attempting to do similar interdisciplinary work in the future."