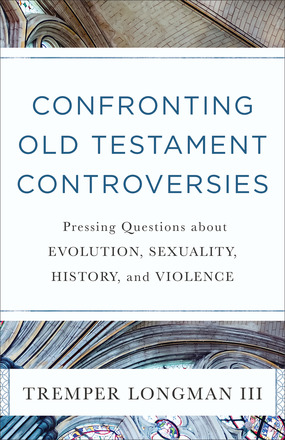 The Old Testament is rife with controversial passages and events that raise questions about its continued significance for today. Often our solutions have tended toward the extremes--ignore problem passages and pretend they don't matter or obsess over them and treat them as though they are the only thing that matters. Now Old Testament scholar Tremper Longman confronts pressing questions of concern to modern audiences, particularly young people in the church:

Pastors, leaders in the church, and thoughtful and troubled Christians in the pews will find here a well-reasoned and faithful approach to dealing with the Old Testament passages so many find challenging or disconcerting.


"Longman's high view of biblical authority, his deep pastoral concern, and his commitment to the power of the gospel have shaped this insightful guide to help inform our conversation about difficult and hotly debated Old Testament topics."--Paul Copan, Palm Beach Atlantic University; coeditor of the Dictionary of Christianity and Science and author of Is God a Moral Monster?

"In this book Tremper Longman III is courageous, clear, charitable, and confessional. This book will be a blessing and resource for those wrestling with these contentious issues in honesty and faith."--Christopher J. H. Wright, Langham Partnership; author of Old Testament Ethics for the People of God and The God I Don't Understand


Tremper Longman III (PhD, Yale University) is Distinguished Scholar and Professor Emeritus of Biblical Studies at Westmont College in Santa Barbara, California. Before coming to Westmont, he taught at Westminster Theological Seminary in Philadelphia for eighteen years. He has authored or coauthored more than thirty books, including An Introduction to the Old Testament, How to Read Proverbs, The Lost World of the Flood, and commentaries on Genesis, Job, Psalms, Proverbs, Ecclesiastes, Song of Songs, Jeremiah and Lamentations, and Daniel.

"Tremper Longman is a highly respected name in Old Testament studies. I myself am a grateful beneficiary of his scholarly work and have appreciated his friendship and collegiality over the years. So when he writes about Old Testament controversies, we readers should take notice and ponder his well-considered perspectives, however challenging they may be. Longman's high view of biblical authority, his deep pastoral concern, and his commitment to the power of the gospel have shaped this insightful guide to help inform our conversation about difficult and hotly debated Old Testament topics."

"Longman walks where mere mortals fear to tread, and he does so with erudition, honor, and grace. His scholarship is vast, and he takes those who hold different views seriously in a manner that is not only commendable but should be the standard for critique. I doubt there are many who will agree with him across the board on these challenging issues, yet the depth of reflection he offers is enough to help you return to the Scriptures to address your own presuppositions and aid you in articulating your current understanding of these controversies. I am profoundly grateful for Tremper for countless reasons, and this labor simply adds one more reason I consider him our generation's foremost Old Testament scholar."

Dan B. Allender, professor of counseling psychology and founding president, The Seattle School of Theology and Psychology

"Fools rush in where wise men fear to tread, but Tremper Longman is no fool. This book covers ground on which people can make fools of themselves, but he has been thinking for decades about the questions he discusses here. He has stayed abreast of changing views among evangelicals and knows how to keep reflecting on issues without giving up ground when he knows one needs to stand firm. If you want not-too-conservative and not-too-liberal answers to the questions he raises, you will find them here."

"What a wonderful opportunity to journey with the expertise of Tremper Longman and consider the Bible regarding some of the most difficult subjects facing Christians today! This is a valuable book and worthy of study and consideration."

"The Old Testament is full of difficult and controversial passages. These are often read without consideration of their original, ancient cultural contexts. Dr. Tremper Longman has tackled four of the most controversial topics: evolution, history, violence, and sexuality. Rather than settling for simplistic explanations that will not hold up under genuine scrutiny, Longman has brought many years of study and scholarship to bear on these problems. In a truly marvelous way, he explains these very complex issues with a clarity that will enhance readers' comprehension. Far from being a mere Christian apology, this book wrestles with the real issues and sheds light that brings about a full engagement. It is a pleasure to recommend this very significant volume."

"Many books on issues of faith and practice--and what the Bible has to say about both--gladly take on the author's ideological opponents. Tremper Longman's book is unique in taking on his friends, both literal and theological. He specifically addresses the arguments of scholars who could be characterized broadly as 'evangelical' (though some are fleeing the term) but who are embracing and advocating understandings of the Bible that have been more characteristic of liberal scholars. He defends the Bible's integrity and truthfulness authoritatively but with a wonderfully irenic spirit and accessible style that should be a model for such exchanges of ideas between people of good will."

Daniel Taylor, author of The Skeptical Believer and Death Comes for the Deconstructionist

"Tremper Longman addresses the most controversial questions raised by the text of the Old Testament with courage and aplomb. Here we have a clear-eyed, common-sense treatment of the biblical text offering readers answers that many will find helpful. Indeed, the church will benefit greatly from this work."

"Tremper Longman is a rare scholar, and this book is a unique gift to the believing and doubting public. In a world divided over contentious issues, Confronting Old Testament Controversies somehow learns from all sides and then plots a path of balance, clarity, and grace. This will now be my number-one recommendation to all who ask about the so-called problems of the Old Testament."

"With typical clarity, good sense, and balance, Tremper Longman tackles the most challenging questions related to the Old Testament. This is a volume I will be referring students and skeptics to for years to come."

"In this book Tremper Longman III is courageous, clear, charitable, and confessional. He is courageous in tackling subjects that arouse intense controversy as well as baffled distress. Any time I teach the Old Testament, someone will raise one or another of these issues. He writes with pleasurable clarity, making his deep scholarship available with lightness and warmth. His disagreements with other scholars, including evangelical friends, are expressed with respect and without vitriol. Above all he writes out of clear evangelical conviction on the inspiration, trustworthiness, and moral authority of the canon of Scripture. This book will be a blessing and resource for those wrestling with these contentious issues in honesty and faith."

Christopher J. H. Wright, Langham Partnership; author of Old Testament Ethics for the People of God and The God I Don't Understand

"With courage and candor, Tremper Longman III confronts controversial issues challenging the contemporary church. In an irenic spirit he documents opposing viewpoints regarding evolution, the credibility of biblical history, God as warrior, and homosexuality. Holding to a high view of inspiration and to the plain sense of Scripture--albeit with other orthodox theologians he regards the earlier chapters of Genesis as intentionally figurative--he defends convincingly the church's traditional stance regarding these issues; for example, homosexuality is as sinful as greed. Here is a book that orthodox clergy and an intelligent laity have been looking for."