Christianity and the Constitution

The Faith of Our Founding Fathers 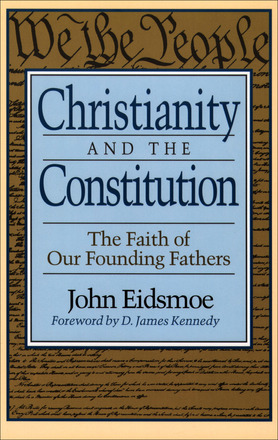 John Eidsmoe rights the faulty historical record and correctly brings us back to the roots that made America great . . . clearly demonstrates that our constitutional liberties are a direct result of our founders' moral and religious convictions which were based on a belief in a God who created heaven and earth as well as on the fixed and unchanging absolutes of God's Word."--Robert Skolrood, National Legal Foundation

"Legally accurate yet easy to understand . . . presents the truth about our founding fathers and their strong Christian roots that is missing from most textbooks and reference books written during the last fifty years. Every student of American history, ministers, and public speakers should read this book. . . ."--Tim LaHaye, bestselling author

"Combines an interesting presentation with fine scholarship and a critical m message . . . should be read by anyone interested in the Constitution or Christianity."--Wendell Bird, constitutional attorney

"Knowledge of our Christian heritage is an important weapon in the current fight for religious freedom in America. Eidsmoe has given us an entire arsenal of new and important evidence substantiating the Christian roots of our government."--Mike Farris, Home School Legal Defense Association

"Balanced and lucid . . . clearly documents the pervasive Christian influence on the lives and thought of those who wrote our Constitution. I recommend it highly as a corrective to the almost totally secular portrayal of the Constitution found in so many textbooks today."--Paul Vitz, author

About the Author: John Eidsmoe holds five degrees in law, theology, and political science. He currently serves as professor of constitutional law and related subjects at the Thomas Goode Jones School of Law, Faulkner University, Montgomery, Alabama, where he received the Outstanding Professor Award in 1993. A constitutional attorney and lieutenant colonel in the U.S. Air Force Reserve, he has also taught church history and other subjects in various seminaries and has produced a twelve-part video series titled The Institute on the Constitution. His other books include The Christian Legal Advisor, God and Caesar, and Columbus and Cortez.