Christian Women in the Patristic World

Their Influence, Authority, and Legacy in the Second through Fifth Centuries 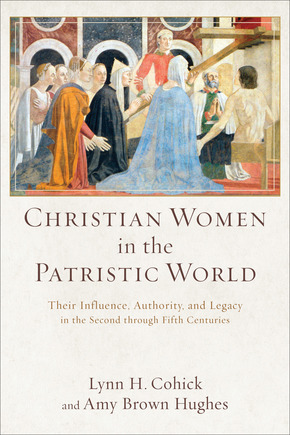 From facing wild beasts in the arena to governing the Roman Empire, Christian women--as preachers and philosophers, martyrs and empresses, virgins and mothers--influenced the shape of the church in its formative centuries.

Christian Women in the Patristic World provides in a single volume a nearly complete compendium of extant evidence about Christian women in the second through fifth centuries. Through a careful examination of literary and material evidence, the book highlights the social and theological contributions women made to shaping early Christian beliefs and practices, integrating their influence into the history of the patristic church and showing how their achievements can be edifying for contemporary Christians.

Contents
Introduction
1. Thecla: Christian Female Protomartyr and Virgin of the Church
2. Perpetua and Felicitas: Mothers and Martyrs
3. Christian Women in Catacomb Art
4. From Pagan to Christian, Martyr to Ascetic
5. Helena Augusta, "Mother of the Empire"
6. Egeria's Itinerary and Christian Pilgrimage
7. Macrina the Ascetic Entrepreneur and the "Unlearned" Wisdom of Monica
8. Paula, Marcella, and the Melanias: Ascetics, Scholars, and Compatriots in Controversy
9. Aelia Pulcheria, "Protectress of the Empire," and Empress Eudocia, a Theological Poet
Conclusion: Responsibly Remembering
Indexes

"I constantly encourage students and pastors to tell more stories about women in the early church from the pulpit, in classes, and in casual conversations. The common response, which opens a window onto a bleak landscape in their knowledge and in the church's history with women, is this question: 'Where can I find those stories?' Christian Women in the Patristic World is now the answer, as it populates that bleak landscape with dynamic women. This is a book for every pastor's and teacher's bookshelf because it not only tells stories about women but also shows how the early church, which has often been maligned for its reputation when it comes to women, was more formed by women than many know."

"This engaging volume, accessible to students and general readers alike, highlights the theological contributions of women in the second through the fifth centuries CE. Informed by a thorough knowledge of the ancient historical context, the authors offer a nuanced discussion of the fascinating material. This book sheds new light on aspects of women's influence in early Christian communities, with a specific focus on their roles in theological debate and development."

"Poet Mourid Al Barghouti has famously said, 'If you want to dispossess a people, the simplest way to do it is to tell their story and to start with, "secondly."' If we start with Basil of Caesarea and Gregory of Nyssa and not with Macrina, their sister, who influenced and guided them, we end up with a truncated understanding of Cappadocian theology. If we start with Augustine the bishop and not with Monica's influence on her son, we will scarcely understand the Theologian of the Heart. In this book, Cohick and Hughes begin where good history ought to begin: with 'firstly.' They bring to the fore the often overlooked protomartyrs, theologians, teachers, ascetics, and politicians of the early church--the dispossessed women whose stories animated the imagination of Christians for centuries and whose influence, authority, and legacy has been preserved in the literary and material record. This is an exceptional book."

"This engaging and readable study of early Christian women is especially appealing because of its attention to a selection of fascinating characters. By adopting this kind of biographical approach, while still supporting their stories with excellent scholarly analysis and helpful historical context, Cohick and Hughes make their subjects--and their times and places--come alive."

"Lynn Cohick and Amy Brown Hughes bring a welcome gift to patristic scholarship and to the classroom with this volume. Skillfully weaving together the most recent and cogent scholarship on women in early Christianity, they successfully show the critical and integrative contributions of early Christian women to the complex development of Christian theology, literature, liturgy, and monasticism. Theologically nuanced, historically informed, contextually careful, and delightfully written, this book will both enlighten and challenge readers, scholars, and students alike."

"This sophisticated and wide-ranging study will be of great interest to anyone concerned with the status and roles of women in the early Christian world. Abundantly illustrated and sensitive to the many problems of interpretation posed by sources, it takes us on an exhilarating ride from the second to the fifth century. Cohick and Hughes model the practice of 'responsible remembrance' that they encourage in their readers."

A Jesus Creed 2017 Book of the Year (Honorable Mention)
A Top Ten Book for Parish Ministry in 2017, Academy of Parish Clergy

"This book opens the door to a room full of women who deserve a place at the table with the men whose stories have been told. There is here good historical sketch, solid theological awareness, and an eye on the influence each woman can have in the church today. What a delightful read."

"In retelling the stories of women like Thecla, Helena, Perpetua, and Macrina, the authors recover the manifold ways women exercised authority in the shaping of Christian theology."

"These days there are few books where I learn a lot I didn't know about before. On women in the early church, I like to think that I have an above average knowledge of the topic, from Mary Magdalene to Thecla, to Perpetua and Felicity to Augustine's mother Monica. However, this book by Lynn Cohick and Amy Hughes really did open my eyes to a lot of other women in the patristic period, those involved with the Nicene controversy, and close to the seat of imperial power, that I was hereto completely ignorant about. So this is a book is definitely one to read!"

"An extremely well-researched and well-documented account of very important women. . . . Cohick and Hughes show us that there were many women (church mothers, if you will) whose roles were prominent and significant in the development of the theological beliefs and practices in the earliest centuries of the church age, and whose influences we still appreciate. I highly recommend this book both for what it teaches about these prominent women, but also for the light it adds to our understanding of the many political elements that went into the establishment of the early church, its extension in the world, and its beliefs. The book is also an excellent primer on historiography: Cohick and Hughes demonstrate how it should be done."

"This book provides a window into the position and role of women in the first five centuries of Christianity. With a firm reliance on the primary sources of the period as well as a thorough acquaintance with the various perspectives of women's studies over the last few decades, the authors have written a scholarly work on early Christian women that also readily engages the reader. In surveying key Christian women over five centuries, the authors ably provide historical background of the changing centuries and highlight the changing challenges and emphases of the church over time. . . . The story of Christian women in the early church is part of the bigger history of the church's early days. This substantial volume ably tells their story."