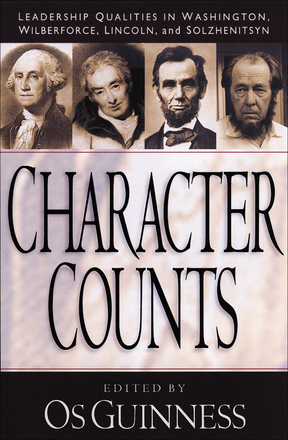 At the end of the twentieth century, as moral standards decline (especially among public figures), our nation is in need of men and women of character.

In Character Counts, renowned thinker and cultural critic Os Guinness has gathered together short biographical and reflective chapters about four remarkable world figures who not only withstood the extreme adversities of their offices and situations but flourished and grew under pressure. How did they do it?

Concerned citizens and all who are eager to raise the level of character in this generation and the next will draw inspiration from these brief, readable biographies. The four insightful chapters reveal that adversity, apart from its power to overwhelm, has the potential to spotlight true moral character and produce life-changing leaders.

"For readers wanting a historical and cultural basis for discussing the character issue, this is an indispensible resource. There's something for everyone, from casual readers to pastors seeking illustrations. Safely recommend this as a great aid for understanding the battles currently raging over integrity."--CBA Marketplace (March 1999)

"Guinness has done a fine job in bringing the moral tenor of the lives of these great men to the fore. . . . The great virtue of the book is the lives of the men studied. In Guinness's words, 'Biography should be a staple in the diet of both disciples and citizens, for great lives do more than teach. They stir, challenge, rebuke, amuse, and inspire at levels of which we are hardly aware.' And so, too, this book."--Religion & Liberty (May/June 1999)

"Provides fine insight into the nature of honesty and integrity. A must-read for students of character--or those interested in the men themselves."--Youthworker (July/August 1999)

"He is a prescient prophet, whose feet are firmly planted in historical precedents. Readers of Guinness will find him harvesting wisdom from the writings of Washington, Lincoln, Wilberforce, and Solzhenitsyn. Yet, in all his brilliance and premonitions, his writing is refreshingly readable. His spirit is meek. Not unlike his mentor, Dr. Francis Schaeffer, Guinness's insightful contribution to this generation should be a wake up call to people of faith."--The National Educator (January 2000)