Understanding the Conflicts That Shaped the Reformer 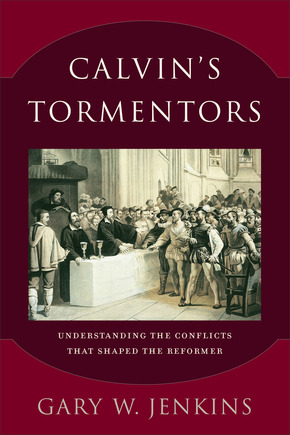 Calvin's Tormentors offers a unique approach to John Calvin by introducing the individuals and groups who, through their opposition to Calvin's theology and politics, helped shape the Reformer, his theology, and his historical and religious legacy.

Respected church historian Gary Jenkins details how the polemical struggles that dominated the Reformation characterized Calvin to such a degree that understanding his interlocutors helps us better understand Calvin himself in all his foibles, frailties, brilliance, and candor. Jenkins shows how Calvin had to defend or rethink his theology in light of his tormentors' challenges. The book reveals Calvin as a subtle thinker whose intellectual life wore the marks of the controversies he endured, giving readers a more nuanced view of Calvin's life and thought. The book highlights the central theological ideas of the Swiss Reformation and introduces figures and movements often excluded from standard texts, making it an outstanding textbook for courses on Calvin and the Protestant Reformation.

"Jenkins's extensive survey of John Calvin's opponents, both in Geneva and further afield, offers fresh insights into the Reformer's theological outlook in one accessibly written volume. The book fills a noticeable gap in Calvin studies."

"This provocatively titled book represents neither a defense of nor an assault on Calvin. Rather, Jenkins is exceptionally evenhanded in his treatment. He discusses the lives and exploits of those who attacked Calvin and also shows that Calvin frequently brought these attacks on himself. Calvin's Tormentors treats infamous fracases as well as lesser-known ones. Its handling of the Servetus and Bolsec cases in particular is exemplary. Jenkins is a patient, thorough, and insightful scholar, not to mention a beautiful writer. This stimulating read is punctuated with lovely vignettes, pin-sharp detail, and plenty of grist for a graduate seminar or for private reflection."

"Gary Jenkins's Calvin's Tormentors is a refined piece of scholarship on what is a rather neglected aspect of the life and work of the Genevan Reformer, namely the nature and character of the voices raised against him and his reform program. Jenkins provides detailed and well-designed studies of Calvin's interactions with du Tillet, Caroli, Sadoleto, Servetus, Castellio, Berthelier, Baudouin, Bolsec, Westphal, and the Italian antitrinitarians. This is a fine historical analysis that provides a significant and often-neglected window on the Genevan Reformation--a work to be welcomed by scholars and students alike."