Challenging the Myth, Recovering His Call to Peacemaking 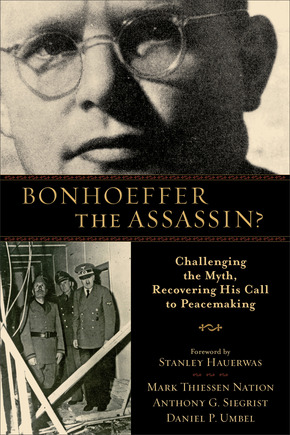 Most of us think we know the moving story of Dietrich Bonhoeffer's life--a pacifist pastor turns anti-Hitler conspirator due to horrors encountered during World War II--but does the evidence really support this prevailing view? This pioneering work carefully examines the biographical and textual evidence and finds no support for the theory that Bonhoeffer abandoned his ethic of discipleship and was involved in plots to assassinate Hitler. In fact, Bonhoeffer consistently affirmed a strong stance of peacemaking from 1932 to the end of his life, and his commitment to peace was integrated with his theology as a whole. The book includes a foreword by Stanley Hauerwas.

"An enormously important book. It is exactly right on the core of Bonhoeffer's Christian ethics and incisively helpful on the ethics of peace and war. The point is not principlism but God in Jesus entering incarnationally with compassion into the midst of our defenses and alienation, bringing healing and our participation in Jesus's nonviolent way."

Glen Stassen, author of A Thicker Jesus: Incarnational Discipleship in a Secular Age

"Nation, Siegrist, and Umbel challenge the widely-held assumption that after the beginning of World War II Bonhoeffer not only participated in the anti-Nazi conspiracy but set aside his earlier pacifism and adopted a more 'rational' and 'realistic' stance, which included participation in the plot to assassinate Hitler. The close readings of Bonhoeffer's biography set in the larger story of the conspiracy and of the Ethics manuscript, in which the more realistic account is supposedly found, are of particular value. Regardless of whether you are persuaded by the authors concerning Bonhoeffer's level of involvement in the attempt to kill Hitler, this volume will decisively reframe the way we read the thought and life of this most remarkable Christian."

"This book offers a well-researched, well-thought-through argument that demands attention from anyone interested in the legacy of Dietrich Bonhoeffer. It is a new look at his life and work that offers a critical lens on traditional interpretations of his devotion to the Sermon on the Mount in the face of real life crisis. These authors are to be applauded for this significant contribution."

"If you mention Bonhoeffer, just about everyone thinks of his involvement in a conspiracy to kill Hitler. This becomes a major key--sometimes the key--to interpreting his writings. This fascinating book not only questions this assumption but also shows what happens when you read him without it. A thoroughly engaging book."

"This extensively researched and passionately argued book will invariably provoke discussion in Bonhoeffer studies as it challenges misconceptions of his role as assassin and patriot. It persuasively reconciles Bonhoeffer's pacifist writings with his political activities in the Abwehr, as well as themes of pacifist obedience with political responsibility often separated by Niebuhrian 'political realist' readings. This is an invaluable study of Bonhoeffer's theological ethics that must be taken seriously."

"Those of us who have been uneasy with the too-glib assumption that Bonhoeffer gave up his commitment to pacifism to join a conspiracy against Hitler can now rejoice. This book's careful scholarship thoroughly proves that the major change in Bonhoeffer's theology happened much earlier and that he remained steadfast thereafter as a pacifist until his death at Nazi hands. This clarifying volume must be read by everyone."

Marva J. Dawn, theologian, lecturer, and author of The Sense of the Call, Unfettered Hope, and Being Well When We're Ill

"This book's provocative title is designed to challenge the received view of Dietrich Bonhoeffer's role in the German Resistance's plans to overthrow the Nazi regime by murdering Hitler. The authors seek to show that he had no sympathy with such political violence. Instead he remained true to the teachings of the Sermon on the Mount, especially to Jesus's teachings about the ethics of peace, which he had outlined so forcefully in his book Discipleship. Their careful analysis of Bonhoeffer's writings finds no evidence that he endorsed tyrannicide. They make a strong case for a re-evaluation of his legacy."

"The book is primarily a careful, insightful exposition of Bonhoeffer's passionate theology, which demonstrates that it would have precluded any involvement in assassination attempts. The book carefully and compellingly probes the way in which he had arrived by 1932 at the convictions that would remain constant for the rest of his life. . . . I regard this analysis of Bonhoeffer's life and thought as a compelling presentation to which careful attention must be paid."

"The traditional understanding of the German theologian Dietrich Bonhoeffer . . . is that he was not only involved in the resistance against Nazi Germany but participated in efforts to assassinate Hitler. [The authors] challenge this idea, arguing that there is no documentary evidence that Bonhoeffer was involved in plots on Hitler's life and asserting that he remained a pacifist throughout the war years. . . . By arguing as they do, the authors upend commonly held assumptions about the theologian's activities and underlying credo during World War II. . . . This book, with its bold assertions and careful argumentation, is excellent for stimulating new thought. Bonhoeffer scholars and lay readers with an interest in him will find it beneficial."

"Nation et al are arguing their case on a profoundly informed basis: they have mapped carefully the development of Bonhoeffer's theological ethics from his early period (Barcelona in the late 1920s), the most influential Discipleship book in the late 30s when he was leading the underground seminary, and then in the later Ethics where we encounter his 'worldliness.' What this book does in the middle chapters . . . is to demonstrate that there is a decisive break between Barcelona and Discipleship, one in which Bonhoeffer shifts from anti-pacifism to pacifism on the basis of the Sermon on the Mount and Jesus' teachings. What the book also demonstrates is that there is no such break or significant shift between Discipleship and Ethics. . . . To argue that Bonhoeffer changed his mind requires that he significantly changed his mind and abandoned his Discipleship themes. Bonhoeffer himself denies this and affirms that he stands by his Discipleship. Without that evidence of shift between Discipleship and Ethics, the argument about Bonhoeffer shifting just doesn't gain traction. . . . I consider this book a successful challenge to the ruling paradigm that sees a major shift in Bonhoeffer from his idealism of Discipleship to a realist posture in Ethics. . . . I no longer think Bonhoeffer made a tragic mistake in entering into the conspiracy and so shifted from his pacifism because I'm not convinced he entered into the conspiracy. Bonhoeffer may well have sustained his pacifism."

"A book that will surely create conversations for a decade about whether or not Bonhoeffer was involved in the conspiracy to assassinate Hitler."

"This is a book that has the virtue of working with Bonhoeffer's texts in detail. The authors have read widely and make good use of the fine scholarship of others as well as arguing against positions they see as flawed. Moreover, and appropriately, their tone remains irenic throughout. . . . This is a book that deserves to be read and considered carefully. Certainly some of the assumptions about Bonhoeffer's life and thought which the authors address are in need of revision, and their work can aid that process."

"[A] consequential book. . . . Nation, Siegrist, and Umbel write as careful demythologists. . . . The real value of this book is in advancing the reconfiguration of Christian peacemaking from a passive purity cautiously protected to a venture that cost Bonhoeffer his life--and perhaps also his moral innocence."

"To dislodge a narrative so deeply entrenched in popular perception is a herculean task. Nation, Siegrist, and Umbel go about it thoughtfully, meticulously, and artfully, taking pains to demonstrate how Bonhoeffer was an altogether different kind of martyr than what most people believe. . . . Nation, Siegrist, and Umbel marshal an impressive case based on Bonhoeffer's life and thought. . . . The authors will not convince everyone, but they do shift the burden of proof. No longer is it possible to uncritically assume that Bonhoeffer discarded his pacifism in order to help plot the Führer's assassination. . . . For anyone who has ever doubted that this apostle of obedient discipleship would really violate a teaching of Jesus that he himself understood to be central, this book explains why such doubts may be justified. [It is] well-crafted, judicious, and happily short on polemics. . . . It recovers the Bonhoeffer who radically and consistently gave witness to the cross, a man to whom Jesus was all in all."

"Of the forty-two attempts to kill Hitler, only five have any 'perceived connections' to Bonhoeffer. The authors, however, demonstrate that Bonhoeffer did not participate in any of the five assassination attempts. . . . While Bonhoeffer the Assassin will definitely not convince everyone, it represents a novel and valuable contribution to Bonhoeffer scholarship. The book demonstrates Bonhoeffer's commitment to peace and opposing injustice, and will likely lead to further reexaminations of Bonhoeffer's life and work."

"A well-researched and well-written book. . . . Hopefully, it will serve as a springboard for further scholarship into Bonhoeffer's life as a pacifist."

"[A] provocative and highly engaging book. . . . Bonhoeffer the Assassin? is both an important contribution to the field of Bonhoeffer studies and a gift to help the church in identifying and narrating the lives of the saints. It deserves to be widely read and debated."

"At the very least, [this] work shows that the popular narrative is very open to question and that it requires further consideration. Having read and heard so much about Bonhoeffer in recent years, readers are now more equipped to critically penetrate an important question about Bonhoeffer that inevitably plays a major role in how we think about and interpret him. If you have come to appreciate the complexity, depth, and significance of Dietrich Bonhoeffer's life and work as I have, Bonhoeffer the Assassin? offers you a chance to reexamine this controversial aspect of the great German theologian's life and legacy."

"This engaging page-turner is highly recommended."

"[This book] challenges the widely-held belief that the Lutheran pastor and celebrated theologian, Dietrich Bonhoeffer, took part in . . . a conspiracy [to kill Hitler] in 1944. . . . Nation explores the evidence in some detail. . . . [This book has] much more to offer than a revised, more accurate understanding of Bonhoeffer's life. . . . There are demanding chapters . . . but also much for us to take to heart."