The Development and Delivery of Expository Messages 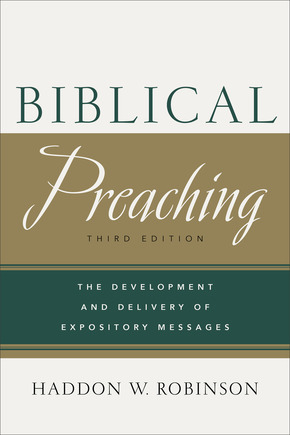 This bestselling text by Haddon Robinson, considered by many to be the "teacher of preachers," has sold over 300,000 copies and is a contemporary classic in the field. It offers students, pastors, and Bible teachers expert guidance in the development and delivery of expository sermons. This new edition has been updated throughout and includes helpful exercises.

Praise for the Second Edition

"[An] outstanding introduction to the task of preparing and presenting biblical sermons. More than any other book of the past quarter century, Biblical Preaching has profoundly influenced a generation of evangelical preachers."--Preaching

Contents
1. The Case for Expository Preaching
2. What's the Big Idea?
3. Tools of the Trade
4. The Road from Text to Sermon
5. The Arrow and the Target
6. The Shapes Sermons Take
7. Making Dry Bones Live
8. Start with a Bang and Quit All Over
9. The Dress of Thought
10. How to Preach So People Will Listen
A Final Word
Sample Sermon and Evaluation
Student Exercises
Answers to Student Exercises
Indexes

"The book might be called a 'Handbook for Preachers,' for it addresses ways of dealing with the snags encountered in preparing a sermon (homily) as well as features that support and enhance its delivery. It also has a very useful set of student exercises for each of the chapters. Though the book is written with the beginner in mind, it is not so elementary that experienced preachers will not benefit from the riches it contains."

"When a book is on its third edition, with the editions spanning a period of thirty-four years, one should take note. If this same book is on the topic of preaching--a discipline in which some can be given to trendiness--one should particularly pay attention. . . . This volume stands as a classic among preaching textbooks. Thirty-five years since its initial publication, it remains a quality introduction to preaching that is worthy for consideration when training new preachers."

Praise for the Second Edition

One of the 25 Most Influential Preaching Books of the Past 25 Years, Preaching (2010)

"Robinson's volume has become a standard text of expository preaching at evangelical colleges and seminaries, and the second edition has been eagerly awaited. While retaining the solid content of the first edition, Robinson has also provided helpful updates which relate to the changing homiletical scene of the last two decades. The new edition is sure to guarantee Biblical Preaching its place in homiletical libraries for another generation."

"The definitive textbook on contemporary expository preaching. Currently it is used in more than 150 Bible colleges and seminaries as a primary text for beginning preachers. Robinson's famous question 'What's the Big Idea?' has become the fundamental issue for thousands of preachers in their effort to understand the primary intention of a given text for contemporary audiences. Exercises at the end of each chapter enhance the practicality of the book. Written in 1980, the book was really ahead of its time. Today it serves as an essential primer on preaching the Word of God faithfully and powerfully in these times. Hey, that many seminaries can't be wrong!"

"Biblical Preaching brims with homiletic wisdom from a master of the art. Robinson not only shares insight about exegeting passages for preaching, he also provides many strategies on how to communicate scripture in the beneficial manners. . . . Whether a preacher is a neophyte or a seasoned veteran, this homiletical handbook rewards its readers thirty- and sixty- or even a hundredfold."

"Robinson's book offers a bracing and yet enjoyable whirlwind tour of homiletical theory. If you are looking for a book to challenge you and to enrich how you go about the privileged work of preaching the gospel, this book won't disappoint. . . . Biblical Preaching can be a helpful resource in polishing some of the most basic homiletical skills that we place into the service of the proclamation of the gospel."

"The homiletics primer of choice for over 100 seminaries and Bible colleges is now, finally, in its second edition. . . . Robinson's book is an excellent primer, the one I recommend and use. The second edition is even better than the first. Robinson has thought himself clear on the mysterious process of birthing a sermon. Novices can cut their eyeteeth on this book, and seasoned preachers will see in black and white what they have done intuitively for years. The ten methodical stages with their examples and exercises make the art of preaching accessible. . . . If you've read the first edition, read the second. Some light bulbs may turn on for you. If you haven't read the first, jump straight to the second, and see why more than 200,000 copies of this book are in print."

Journal of the Evangelical Homiletics Society

"This book stands apart from all the others in terms of recognition by those who study preaching. . . . [An] outstanding introduction to the task of preparing and presenting biblical sermons. Robinson's 'Big Idea' preaching has shaped the thinking of thousands of expository preachers and been the major influence on many of those who teach preaching in today's classrooms. More than any other book of the past quarter century, Biblical Preaching has profoundly influenced a generation of evangelical preachers."