Beneath a Harvest Sky 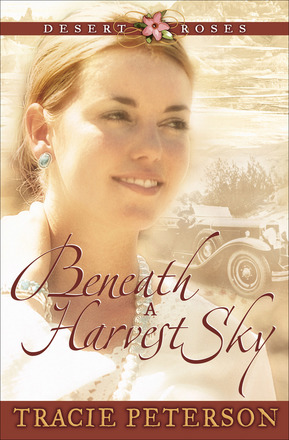 As a Harvey tour guide, Rainy Gordon spends her days in the magnificent landscape of New Mexico. Having already fled a tainted past, Rainy is alarmed when she becomes a suspect in an investigation of stolen Hopi Indian artifacts. The man she loves has been secretly asked to assist the law enforcement groups in finding the thief. When all evidence points in her direction, will the truth be revealed in time?

"Rainy Gordon wants a husband, children, and a career in archeology. She doesn't want to remain a Harvey Company tour guide for the rest of her life. Now she's getting impatient with God. Not only for withholding a husband, but for allowing her to be falsely accused of stealing artifacts at a university where she used to work. When artifacts begin to disappear along Rainy's tour route, she finds herself under suspicion again. She confides her problems to Duncan Hartford, an attractive museum curator. How can he tell her that he's been hired by the government to investigate her possible role in the thefts-especially when he's rather kiss her than arrest her? Peterson's third in the DESERT ROSES series is set in 1931 New Mexico. The story didn't hook me until the end of the first chapter, but it kept me turning pages thereafter. Rainy's struggles with God's timing will resonate with a lot of readers." -Romantic Times, June 2003