Behind the Scenes of the Old Testament 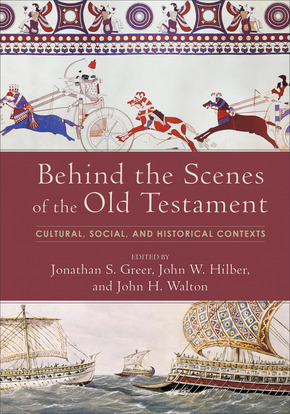 This authoritative volume brings together a team of world-class scholars to cover the full range of Old Testament backgrounds studies in a concise, up-to-date, and comprehensive manner. With expertise in various subdisciplines of Old Testament backgrounds, the authors illuminate the cultural, social, and historical contexts of the world behind the Old Testament. They introduce readers to a wide range of background materials, covering history, geography, archaeology, and ancient Near Eastern textual and iconographic studies.

Meant to be used alongside traditional literature-based canonical surveys, this one-stop introduction to Old Testament backgrounds fills a gap in typical introduction to the Bible courses. It contains over 100 illustrations, including photographs, line drawings, maps, charts, and tables, which will facilitate its use in the classroom.

"No sound interpretation of the Old Testament can afford to ignore the world from which the text came. Physical, historical, archaeological, cultural, social, and religious features all need to be taken into account. Available information, however, is usually scattered through many publications and difficult for students to access. In this volume the editors have done sterling work in gathering a galaxy of leading specialists to collect and present all such relevant information in modest-length chapters that present the data in an authoritative but eminently readable manner. Coursework and personal study stand to be hugely enriched by this valuable compendium."

"Featuring an outstanding range of international contributors, Behind the Scenes of the Old Testament is an up-to-date introduction to the theological, social, and historical contexts of the Hebrew Scriptures. The attention paid to neglected topics, such as climate, economy, foodways, historical geography, iconography, music/dance, social stratification, trade, and women--in addition to the substantial attention given to archaeology, history, kingship, literature, prophecy/divination, and worship--is most welcome."

"The publishers and editors are to be commended for making this compendium of up-to-date essays available to students of the Old Testament. The sixty-six essays cover the spectrum of background topics, including geography, archaeology, literature, history, and culture. It is an ideal text for courses in Old Testament backgrounds and an excellent supplement for survey courses. Specialists needing a summary of the latest thinking regarding background issues will also find it a handy tool."

"A team of expert Old Testament scholars and archaeologists have produced an up-to-date and helpful resource for Bible readers, allowing them a vivid glimpse behind the scenes of the Hebrew Scriptures."