Beginning with the Word

Modern Literature and the Question of Belief 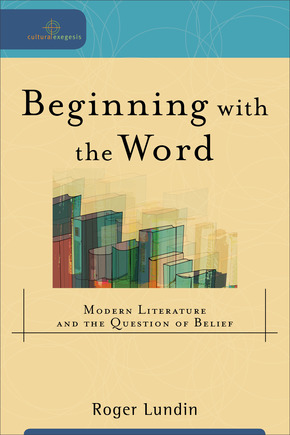 In this addition to the critically acclaimed Cultural Exegesis series, a nationally recognized scholar and award-winning author offers a sophisticated theological engagement with the nature of language and literature. Roger Lundin conducts a sustained theological dialogue with imaginative literature and with modern literary and cultural theory, utilizing works of poetry and fiction throughout to prompt the discussion and focus his reflections. The book is marked by a commitment to bring the history of Christian thought, modern theology in particular, into dialogue with literature and modern culture. It is theologically rigorous, widely interdisciplinary in scope, lucidly written, and ecumenical in tone and approach.

Contents
Introduction
1. Beginning with the Word
2. The Sign in Our Time: Sound and Fury, Suffering and Significance
3. Picturing the Truth
4. From Signs to Stories: Language in the Grasp of God
5. Modern Times: Literature and the Patience of God
6. "I Will Restore It All": Christ, Fiction, and the Fullness of Time
7. Defending a Great Hope: The Word and the Thing Become One
8. Dwelling in Possibility: Visions of Justice, Dreams of Deliverance
9. A Good Man Is Hard to Find: Christ and the Poets
Index

"In Beginning with the Word Roger Lundin explores modern literature's endless wrestling with Christian witness and biblical narrative with his customary thoughtfulness, passion, and personal commitment. He opens for us the ways that writers of the past two centuries reckon with an inheritance they cannot quite manage to receive or refuse."

"I have loved all of Roger Lundin's books and am grateful that there is now another. There are very few critics one thinks of as enlarging one's life, much less making one more fit to live it. Roger Lundin, for this reader, is just such a writer."

Christian Wiman, poet; author of Every Riven Thing and My Bright Abyss; senior lecturer of religion and literature, Yale University

"Lundin writes with extraordinary fluency, grace, and delight. He moves seamlessly between literature and theology, poetry and prose, philosophy and cultural commentary in ways that will renew your confidence in the power of God's wisdom in God's world. Like his other books, Beginning with the Word is a remarkable achievement from a remarkable thinker."

"Beginning with the Word is an absorbing and lively Christian engagement with the naturalism of modern intellectual culture. It is a work of wide scope, written con brio, animated equally by seasoned literary intelligence and by a trust that Christian teaching provides a truthful reading of the world."

"Roger Lundin, a master interpreter of modern culture, works at the full stretch of his impressive capacities in Beginning with the Word. With no desire to damn or dismiss, he confronts the major thinkers and writers who have challenged the belief that the Word of God has become incarnate in Jesus Christ. Lundin replies not with grim rejoinders and loud laments but with surprising revelations that our modern literary masters, when rightly read, still enflesh words with the weight of hope and even glory."

"[Lundin] undertakes a bold and daunting project: winnowing out the metaphysical dimension inherent in good writing--specifically, in the works of the masters of modern literature. Invoking the philosopher Paul Ricoeur, he calls this undertaking the 'hermeneutics of testimony,' which places the book comfortably in the camp of theology more than literature, though literature students will be intrigued. . . . He draws heavily upon the idea that God's own self-revelation through Christ was realized as the logos--the word. Like the Word that was/is Christ, finite words in literature are not simply a matter of sentence construction and wording. They come together mysteriously and invisibly to render revelation. The writers of great literature become beacons of one's own time as revealers of the mysteries of God in a moment, a scene, a word."

"The award-winning biographer of Emily Dickinson and author of other distinguished scholarly works has gifted readers with another exemplary study. Here Lundin . . . explores what he takes to be a vital nexus between language, literature, life, and most especially for him, Christian faith. . . . In this joyous exercise of lucid thinking, anchored in the bedrock theology of Karl Barth, Lundin adroitly fashions considerations of poetry, fiction, cultural critique, and incidents from his own past involving loss and recovery into an efficacious counter-narrative that affirms a 'hermeneutics of testimony'--which leaves existential space for the animating force of Christian principles and practices--against a reigning 'philosophical naturalism' that dispenses with the indispensability of the Judeo-Christian God."

"[Lundin] explicates his argument in the context of history and theology, philosophy and literary criticism, peppering throughout references to literature and his own winsome story. Lundin deftly and gracefully weaves these strands into a unified whole. . . . Academics will appreciate Lundin's thorough and well-reasoned arguments about how naturalism has claimed contemporary language and literature, thereby changing how moderns view words. . . . Lundin is a wonderful teacher who explicates clearly why contemporary thought regarding language and literature is what it is and what the implications are for the church. Not merely an academic treatise, Beginning with the Word both begins and ends in delight and wisdom. Best of all, Lundin answers the question of why it matters that words are more than symbols."

"This is the latest in the impressive 'cultural exegesis' series, and, as the title makes clear, it is about the question of religious faith and belief in modern lit. Lundin is a generous soul, a great reader and writer, and beloved as an esteemed professor at Wheaton. He exudes much that is the best about the whole 'integrating faith and learning' conversation and this book is the accessible fruit of his lifetime of thinking about reading well. . . . A serious read, but oh, so good. A must for anyone who pays attention to contemporary literature and letters, and, of course, for any college lit major."