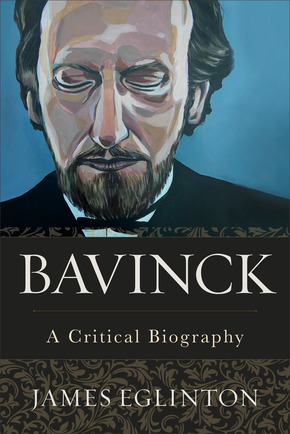 2020 For the Church Book Award

Dutch Calvinist theologian Herman Bavinck, a significant voice in the development of Protestant theology, remains relevant many years after his death. His four-volume Reformed Dogmatics is one of the most important theological works of the twentieth century.

James Eglinton is widely considered to be at the forefront of contemporary interest in Bavinck's life and thought. After spending considerable time in the Netherlands researching Bavinck, Eglinton brings to light a wealth of new insights and previously unpublished documents to offer a definitive biography of this renowned Reformed thinker.

The book follows the course of Bavinck's life in a period of dramatic social change, identifying him as an orthodox Calvinist challenged with finding his feet in late modern culture. Based on extensive archival research, this critical biography presents numerous significant and previously ignored or unknown aspects of Bavinck's person and life story. A black-and-white photo insert is included.

This volume complements other Baker Academic offerings on Bavinck's theology and ethics, which together have sold 90,000 copies.

Introduction: Prolegomena
Part 1: Roots
1. The Old Reformed Church in Bentheim
"From the farmhouse to the town"
2. Jan Bavinck and Geziena Magdalena Holland
"At that time, we were still pariahs."
3. Herman's Childhood and Schooling: 1854-72
"The modern youth has come under the influence of the modern society."
Part 2: Student
4. Kampen: 1873-80
"The education there did not satisfy me."
5. Leiden: 1874-80
"O God, protect me in Leiden!"
Part 3: Pastor
6. Franeker: 1881-82
"It is quite a big and, for an inexperienced candidate, fairly difficult congregation."
Part 4: Professor in Kampen
7. Gathering Materials: 1883-89
"My books are my true company."
8. Writing a Modern Reformation: 1889-1902
"It is the theology needed by our age."
Part 5: Professor in Amsterdam
9. Christianity in the Age of Nietzsche: 1902-9
"In reality there are only two worldviews."
10. Showing His Colors: 1910-20
"Mr. Chairman! Our modern culture and Christianity are inseparable."
11. Bavinck's Final Years: 1920-21
"Do not put it in the newspaper; that does not befit me!"
Postscript
Appendix 1: "My Journey to America"
Appendix 2: "An Autobiographical Sketch of Dr. H. Bavinck"
Appendix 3: "Propositions: The Concept and Necessity of
Evangelization"
Key Figures, Churches, Educational Institutions, and Newspapers
Index

"When it comes to theologians that contemporary church leaders should be reading, I don't know of a more important one than Herman Bavinck. Because so much of his corpus has only recently been translated, we in the English-speaking world have not yet had the full benefit of Bavinck's rich thought, which seems unique in how it stays fully biblical while taking into account the history of the church, of philosophy, and of social currents. But no one can grasp the theology of an Augustine or Aquinas, a Calvin or Luther, without knowing their life and context. James Eglinton has provided this in his new critical biography of the greatest Reformed theologian of the twentieth century. It is a very important yet highly readable volume."

"Impeccably researched and thoroughly readable, James Eglinton's biography of Herman Bavinck deserves a wide readership. Of obvious interest to those concerned with Reformed and neo-Calvinist traditions, this probing biography also speaks to the enduring questions of 'Christ and culture' as it explores how one Christian inhabited his orthodox faith in a complex and changing world. Indeed, the range of timeless topics that Bavinck explored with wisdom and prescience is staggering. As Eglinton invites us into Bavinck's faithful and creative engagement with pluralism, psychology, Nietzsche, education for women, evangelism, missions, racism in America, and politics, we see that we still have much to learn from this member of the great cloud of witnesses."

"In 1910, a Scottish theologian who had recently visited the Netherlands referred in a lecture to Herman Bavinck as 'Dr. Kuyper's loyal and learned henchman.' Now, a hundred and ten years later, another Scottish scholar sets the record straight. James Eglinton demonstrates that Bavinck was no one's 'henchman,' but a brilliant, creative theologian in his own right. For those who are discovering that brilliance in Bavinck's writings newly translated into English, we now have the gift of a wonderfully readable and informative narrative of Bavinck's spiritual and theological journey. This important book confirms what many of us have been convinced of for some time now: Bavinck's time has come as a world-class theologian for our own day."

"James Eglinton is the modern biographer Herman Bavinck deserves. Eglinton is a theologian who is inspired by Bavinck's search for an orthodox engagement with the modern world, knows this world and Bavinck's works well, reads them in Dutch, has researched Bavinck's papers meticulously as a historian, and composes and writes smoothly, as Bavinck himself did. What a treat that Bavinck has this kindred spirit as biographer."

"James Eglinton's biography of Bavinck is outstanding. Scholarly but accessible, it offers an account of Bavinck's life and work in its historical context, resisting the temptation to co-opt him to, or interpret him via, the concerns of later theological parties and conflicts. The picture that emerges here is neither that of a reactionary conservative nor that of a man divided against himself, as others have claimed, but that of a churchman navigating the waters of modernity with the tools of a deep and devout theological tradition. A wonderful companion volume to the Dogmatics."

"In James Eglinton, Herman Bavinck has the biographer he so richly deserves, his own Scottish James Boswell. Using fresh archival sources, Eglinton provides new insights into the man, the churchman, and the thinker who was, alongside Abraham Kuyper, the most important figure in the revival of Dutch Calvinism in the nineteenth and twentieth centuries. Especially illuminating is the additional material on Herman's father, Jan Bavinck; the young Herman; Herman's wife, Johanna Schippers-Bavinck; and the legacy of their daughter and grandsons, all noteworthy on their own. Through careful historical research Eglinton places Bavinck in his broader intellectual and spiritual context as a modern person and effectively challenges some of the oft-repeated myths about him and his secession Christian Reformed community. This will be the definitive Bavinck biography for generations."

"Here is an elegantly written and intimate portrait of a theological giant in the Reformed tradition, based on a thorough reading of all of Bavinck's published and unpublished writings. James Eglinton superbly documents Bavinck's intense personal, spiritual, and intellectual wanderings and wonderings that ultimately led him to the creation of his four-volume masterwork on Christian dogma. This book is destined to be the standard biographical introduction to Herman Bavinck for years to come."

"Doctrine is forged on the anvil of life, and thus any attempt to understand a theologian's works must factor in the foundry of personal history. Devotees of Herman Bavinck can celebrate that they now have a biography that serves this task. James Eglinton has written an exceptionally well-researched account for anyone seeking to understand Bavinck and the modern Reformed tradition. Eglinton pairs in-depth research with insightful analysis. Readers will not be disappointed with the fruit of his outstanding labors."

"James Eglinton's critical biography of Herman Bavinck is the first that gives an in-depth account of the unity-in-diversity and diversity-in-unity of the theologian's thought and life. I can hardly express how grateful I am for this publication. For too long, Bavinck studies has operated on the assumption that he was often at odds with his confessionally orthodox self in his alleged adulteration of Christianity with modern thought and culture. Eglinton's narrative critically debunks assumptions of this sort and convincingly portrays Bavinck's multifaceted life as a testimony to his eclectic theology, which concertedly endeavored to remain committed to Christ at every single point of creaturely existence. I cannot wait to see how Eglinton's biography reshapes our understanding of Bavinck's life, as well as our conceptions of Christian scholarship in particular and Christian calling in general."

"[Eglinton] has produced a magisterial work that figures to become the leading biography of the great Dutch Reformed theologian. . . . Bavinck has received increased attention in the English-speaking world, especially following the translation of his four-volume Reformed Dogmatics, but is still too little known (especially outside the Dogmatics). Eglinton's biography provides a welcome correction, surpassing previous accounts of Bavinck's work in several ways. It is impressively researched, drawing from a wide array of unpublished and frequently overlooked material. Related to this, it provides generally better-informed interpretations of Bavinck's life and thought, identifying reasons to depart from previous scholarship on a variety of issues. It is also well written and clearly organized, guiding the reader through varied subjects without a sense of wasted space or meandering. The book's great theme is that Bavinck, as a theologian, was both orthodox and modern. . . . . From Eglinton's biography I now have a greater sense of Bavinck the man and his broader relevance to the perennial tensions of Christ and culture."

"Eglinton's Bavinck: A Critical Biography reflects a combination of readability, rigorous scholarship, and really good timing. The study of Herman Bavinck, the Dutch author of Reformed Dogmatics, has enjoyed a recent renaissance as evangelical and Reformed theologians have sought modern successors to luminaries such as Calvin and Edwards. The Bavinck renaissance has put his works on many pastors' bookshelves and seminary reading lists. . . . Eglinton's biography comes at the right moment to catch the crest of the Bavinck wave, since Bavinck offers a model for faithful orthodoxy in our secular age. Eglinton reveals startling parallels to questions and tensions the larger church is facing now. If you want to understand the life and world of the man behind Reformed Dogmatics, this book is for you."

"The past decade has witnessed something of an explosion of Bavinck literature in English--both primary and secondary works. An important piece missing in the movement of bringing Bavinck to English speakers was a critical biography. . . . That changed with Dr. James Eglinton's wonderful work on the formative Dutch theologian. Bavinck: A Critical Biography is a masterful look at the life and work of Herman Bavinck and is a model for the right balance of both biographical and theological explication. Eglinton serves readers well by looking at the contextual realities surrounding Bavinck's life and work. Moreover, Bavinck scholarship is sure to benefit from the extended bibliography and compiled resources in this volume. This book is great for students, pastors, and scholars alike."

"An exceptionally detailed and documented work of meticulous scholarship, Bavinck: A Critical Biography will prove to be a welcome and highly valued addition to community, seminary, and college/university library Calvinist collections in general and Herman Bavinck supplemental curriculum studies lists in particular."