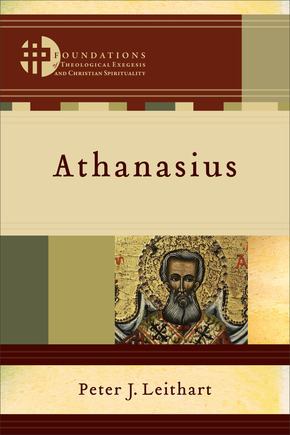 "Leithart has made a substantial contribution to growing academic appreciation of the indispensable and fruitful relationship between the biblical text and the doctrinal statement. A fresh, perceptive, and rewarding study."--Thomas G. Weinandy, OFM, Cap, United States Conference of Catholic Bishops, Washington, DC
This erudite volume offers fresh consideration of the work of famous fourth-century church father Athanasius, giving specific attention to his use of Scripture, his deployment of metaphysical categories, and the intersection between the two. Peter Leithart not only introduces Athanasius and his biblical theology but also puts Athanasius into dialogue with contemporary theologians. The book draws on Athanasius's theology to shed light on contemporary theological debates and defends him against contemporary criticisms of "classical theism."

Athanasius launches the Foundations of Theological Exegesis and Christian Spirituality series. This series is based on the conviction that retrieval of the church fathers is essential to contemporary flourishing and further development in Christian theology; that patristic spiritual interpretation continues to hold out prospects for theology; and that participation in the divine was an important underlying conviction for Nicene Christianity on which we should continue to build today. The series contributes to the growing area of theological interpretation and will appeal to both Protestant and Catholic readers.

About the Series
The Foundations of Theological Exegesis and Christian Spirituality series critically recovers patristic exegesis and interpretation for contemporary theology and spirituality. Each volume covers a specific church father and illuminates the exegesis that undergirds the Nicene Creed. Series editors are Hans Boersma and Matthew Levering.
Contents
Series Preface
Introduction: Scripture and Metaphysics (in the Augustinian Mode)
1. Evangelizing Metaphysics
2. Types, Terms, and Paradigms
3. The One God
4. Beginnings: Word and World
5. Middle: God for Us
6. End: God Made Man, Man Made God
Epilogue (Again in the Augustinian Mode)
Index

"Peter J. Leithart has authored a remarkably good book. He possesses an in-depth and insightful knowledge of the entire Athanasian corpus, and he has examined all of the relevant secondary literature. His scholarship is impeccable. Moreover, Leithart's splendid and stimulating originality resides in his clear and lucid articulation of Athanasius's biblical theology and the metaphysics that lies within that biblical theology. Thus, he has made a substantial contribution to growing academic appreciation of the indispensable and fruitful relationship between the biblical text and the doctrinal statement. Leithart's Athanasius is, as a result, a fresh, perceptive, and rewarding study."

"The action of this book occurs on three levels at least: most obviously, it is a presentation of Athanasius in his confrontation with Arianism; then, too, the author conducts his own engagement with some modern and contemporary scholars both in their interpretation of Athanasius and in their treatment of the substantive questions; and finally, some perennial issues of scriptural exegesis and hermeneutics peep more directly through in many places. Peter Leithart describes his governing systematic purpose as the 'evangelization of metaphysics,' and it may be affirmed that classical doctrines of the Trinity and the incarnation here shine through in all their soteriological strength."

"If Christian theology had superheroes, Athanasius would perhaps lead the list thanks to his sometimes single-handed struggle to maintain trinitarian orthodoxy. Leithart's excellent study shows Athanasius to be christocentric in his biblical interpretation and theology long before Barth made it fashionable to be so. The 'sense of the Fathers' is indeed being visited upon their evangelical great-grandchildren, and with mostly salutary effect. Leithart has got the Foundations of Theological Exegesis and Christian Spirituality series off to a splendid start."

"Theologically inclined readers will appreciate [Leithart's] frequent observations on the relevance of Athanasius's thought for contemporary debates among key theologians. The creative introduction and conclusion that recall the first words of Augustine's Confessions support Leithart's goal of making Athanasius's thought relevant and accessible to broad audiences. Theologians in particular will find this volume a clearly articulated entree into fourth-century theological thought and a valuable conversation partner for constructive theology."

"Many aspects of this work will lead readers to value Leithart's contribution. Students new to the field of Patristics often search in vain for an introductory text--an issue that Leithart resolves in this book. He offers adequate citations that will introduce researchers to the key works associated with Athanasius and the broader field of study. Also, Leithart provides a helpful contribution to the field of hermeneutics in his discussion of Athanasius as a representative of the Nicene tradition of theological interpretation of Scripture. This aspect of his work helps readers understand Athanasius's exegetical approach. . . . The author provides a systematic approach to understanding Athanasius, whose lack of systematization can prove difficult for the newcomer. . . . Leithart's work is a welcome addition to the study of patristic exegesis and deserves close attention by students of historical theology. It will likely serve as an excellent option for seminary and graduate classes either as a primary text or as a resource for introducing the study of patristic theology."

"With exemplary scholarship and refreshing clarity, Leithart examines the intersection of biblical text and creedal statement in Athanasius's thought, showing that Athanasius's metaphysical convictions arise from his meditation on Christ through the Scriptures. . . . Leithart has reviewed Athanasius's theological contribution, not just as a scholarly exercise, but as a reappropriation of the great church father's theology for the present age. Leithart has set a high bar for subsequent volumes in this series."

"The knowledge [Leithart] gleaned from researching the fourth century combined with his interest in exegesis come through with striking clarity. . . . Leithart argues that Athanasius had a robust Christology that shaped each of his writings, so it is fitting that he also makes this the focus of his book. He is Christocentric in numerous creative ways which add to the strength of this book. Leithart also has an impressive knowledge of the current debates and is conversant with a vast array of primary and secondary sources. . . . Athanasius is a great book for anyone interested in the Christological debates of the fourth century, TIS, or modern debates over Trinitarian issues. Leithart not only gives excellent insights into Athanasius's polemics with Arius, but he does so in a unique and fresh way. . . . Leithart should be applauded for reminding us that Athanasius can continue to speak today with great force."