Are You the One Who Is to Come?

The Historical Jesus and the Messianic Question 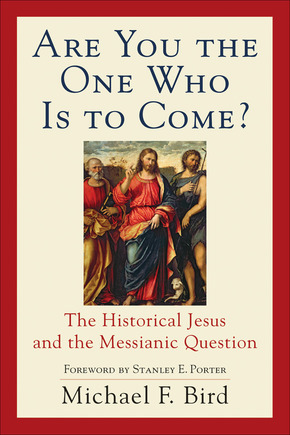 "Whenever scholars consider the question of whether Jesus had any self-conception of a messianic identity, Bird's scholarly study will be one of the contributions to the debate which will be impossible to ignore."--Paul Foster, Expository Times

"Jesus understood himself as designated by God as the Messiah of Israel." This thesis may strike many historical-Jesus scholars as dangerously bold. But through careful study of the Gospels, Second Temple literature, and other period texts, scholar Michael Bird makes a persuasive argument that Jesus saw himself as performing the role attributed to the messiah in the Scriptures of Israel and believed that Israel's restoration hinged on the outcome of his ministry.

Bird begins by exploring messianic expectations in the Old Testament and in Second Temple Judaism, finding in them an evolving messianism that provides historical context for Jesus' life and teaching. Next, he examines the prevailing contention that the messianic claim originated not with Jesus himself but in the preaching of the early church. Bird argues that such contentions lack cogency and often skew the evidence. Examining the Gospels and related literature, he then shows that what Jesus said and did demonstrates that he believed he was Israel's messiah. His career was "performatively messianic" in a way that shows continuity in eschatological terms between Israel and the church.

"Michael Bird tackles a question central to historical Jesus research and to understanding the development of the Christian confession: Who did Jesus say that he was? Thoroughly conversant with the extensive history of scholarship, Bird applies a rigorous critique to the dominant arguments used against attributing a messianic self-understanding to Jesus. He builds a substantial case for Jesus's messianic self-understanding by analyzing the words explicitly spoken on this topic by or about Jesus during his earthly ministry and by examining the deeds Jesus chose to enact and the roles he would have been understood--and would have understood himself--to embody by these deeds. Bird brings a fresh perspective and keen mind to this debate, painting a historically plausible picture of a Judean well versed in current messianic paradigms who crafted a ministry that reflected both an awareness of acting as God's end-time agent and a particular understanding of what that agent was to accomplish."--David A. deSilva, Trustees' Distinguished Professor of New Testament and Greek, Ashland Theological Seminary

"Michael Bird has written one of the clearest and most compelling treatments of Jesus and the messianic question that I have read. Ancient literature and modern literature alike are handled with great expertise and excellent judgment. Readers will find no long-winded, specious theories propounded here. On the contrary, this book lays out the evidence fairly and with economy and then consistently reaches sensible conclusions. In the end, Bird goes where the evidence takes him, concluding that Jesus understood himself as Israel's Messiah, which explains the nature of the name of the movement that arose in the aftermath of Easter. I recommend this book highly."--Craig A. Evans, Payzant Distinguished Professor of New Testament, Acadia Divinity College, Nova Scotia, Canada

"Michael Bird is a prolific author on a range of 'big topics' in New Testament studies, and this time he turns his attention to one of the most controversial areas in historical Jesus scholarship: Messiah. Bird offers a robust defense of what might be called a 'neo-conservative' position on Jesus's self-understanding. This book will appeal to scholars from a range of perspectives due to the vast amount of ancient source material covered in detail along with an array of important modern sources. Students and scholars wanting a detailed but accessible entry into this key topic in historical Jesus studies would do well to start with Are You the One Who Is to Come?"--James Crossley, senior lecturer in New Testament studies, University of Sheffield

"[An] excellent and important new book. . . . Bird demonstrates convincingly that Jesus spoke and acted in ways that were deliberately designed to evoke messianic expectations and hopes. . . . Bird provides a fine overview of scholarship on the varied strands of messianic hope in the period of the Second Temple. He dismantles the classic arguments against a messianic self-understanding for Jesus with surprising ease. . . . In this book we witness the triumph of a plain sense reading of the New Testament in continuity with the teachings of the early Church. . . . Bird gives us a balanced and constructive alternative to the minimalist te
ndencies in recent scholarship. This book is highly recommended for those seeking to understand the historical Jesus in continuity with both Old Testament expectations and the christological proclamation of the New Testament Church."--Letter & Spirit

"Bird has written a book that is crisp and clear, provocative and challenging, but most importantly which demands careful interaction. As is the nature of such a strong challenge to a prevailing consensus, this book is unlikely to change opinion overnight, but whenever scholars consider the question of whether Jesus had any self-conception of a messianic identity, Bird's scholarly study will be one of the contributions to the debate which will be impossible to ignore."--Paul Foster, Expository Times

"This is a short book (only 167 pages of text) packed with a lot of information and analysis. Bird writes with clarity, which will help make his arguments accessible to a wider audience. He also reflects an awareness of issues across a spectrum of ancient texts and modern scholarship. Throughout the book he cleverly interacts with the publications of his conversation partners. . . . Texts are dealt with fairly, and Bird is cautious though optimistic in his conclusions. . . . While I do not share Bird's optimism about all the details of his study, his argument is not without its merits, and it deserves a hearing. . . . [This book] has the potential to serve as a useful resource in a number of settings, especially those where a balanced voice of dissent is missing."--Christopher W. Skinner, Review of Biblical Literature

"Bird addresses a question that is certainly of great relevance to the field of NT studies. What is the origin of the belief that Jesus of Nazareth was the Jewish Messiah?. . . One cannot but be impressed by this contribution to the field of historical Jesus research."--Paul L. Owen, Journal of the Evangelical Theological Society

"This monograph is an exemplary historical tracing of an exegetical issue. Bird presents his arguments clearly, and his rhetorical style easily leads readers down his hermeneutical path."--Steven R. Johnson, Catholic Biblical Quarterly

"This is an ambitious book, with an ambitious thesis, by an ambitious scholar. . . . Bird affirms that the Gospels do offer their readers a recoverable historical Jesus. He succeeds admirably, navigating well the landscape of scholarship, as well as a willingness to let the evidence lead him, rather than beginning with some predetermined conclusion. . . . Bird's tome offers a balanced rejoinder to those highly skeptical that the Gospel writers offer anything of a portrait of the historical Jesus as the coming Messiah, as well as with those who see Jesus as the Messiah in every Scripture. This book is well-written and researched. It will need to be reckoned with when the unavoidable question again surfaces from John the Baptist: 'Are You the One Who Is to Come?'"--Joseph B. Modica, Journal for the Study of the New Testament

"There are other NT scholars who are capable of writing books as quickly (yet as complete) as Bird, but I know of no other scholar that mastered the craft so quickly in their career. Some of those known for writing books quickly, unfortunately, do not have much of interest to say--they have well-padded CVs but have not really contributed to the field of NT studies. So far, this has not been the case with Bird."--John C. Poirier, Pneuma Review

"Bird successfully shows that Jesus' actions through the Passion Narrative are implicitly messianic, and in accord with the usage of the term 'Messiah' in later Christianity. The book's central argument is well made, and clearly presented. . . . This volume shows that Jesus' motives may be inferred from the Gospels. That is part of a recent development in the critical study of the NT, in which Bird's work plays a significant role."--Bruce Chilton, Interpretation

"The book would make an excellent college or seminary textbook in a Gospels class since it does an excellent job describing the variety of messianic expectations in the Second Temple Period. . . . The footnotes provide a rich bibliography for readers who desire to dig deeper into messianic expectations in the Second Temple Period."--Phillip J. Long, Reading Acts blog