Theology and Rhetoric in the Pauline Letters 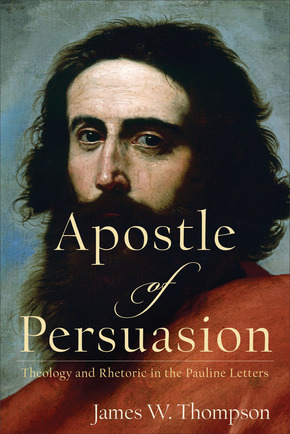 Apostle of Persuasion is the culmination of a career of researching and teaching Paul's letters. Respected senior New Testament scholar James Thompson offers a unique approach to Pauline theology, focusing on Paul's attempts to persuade his audience toward moral formation. Thompson recognizes Paul as a pastor who brought together theology and rhetoric to encourage spiritual formation in his communities. Attempts to find total consistency in Paul's writings fail, says Thompson, because Paul's persuasive tactics changed depending on the situation he was addressing.

This book will appeal to professors, students, and scholars of the New Testament as well as pastors interested in Pauline theology.

Contents
Introduction: Rhetoric and Theology in Paul
1. The Rhetoric of Paul's Letters
2. Paul and the Pharisaic Tradition
3. Where Christian Theology Began: Jesus and the Early Church
4. Paul's Ethos and His Theology
5. First Thessalonians: A Template for Theological Reflection
6. Christology and Persuasion
7. Greco-Roman Values and the Theology of the Cross: The Corinthian Correspondence
8. The Theology of the Cross and Justification by Faith
9. Romans, the Righteousness of God, and the Defense of Paul's Ministry
10. "Seek the Things That Are Above": Persuasion in Colossians and Ephesians
11. Pauline Theology and Rhetoric in the Pastoral Epistles
Conclusion: Paul's Pastoral Theology
Indexes

"In this insightful book, James Thompson embodies the proverbial task of reuniting things that are so often wrongly split asunder--in this case, Paul's theology, rhetoric, and life. Thompson unveils a sophisticated blend of these dimensions in Paul's work of contextual theologizing for the pastoral--indeed, prophetic--aim of community transformation. This volume reintroduces us to Paul and his letters from a distinctive vantage point; it also has significant implications for the church and its ministries."

"In Apostle of Persuasion James W. Thompson masterfully brings together two critical areas that are usually treated separately in Pauline studies: rhetoric and theology. Arguing for a multilayered rather than one-dimensional approach, Thompson deftly situates Paul's letters as compositions in which the apostle interweaves theological and rhetorical strategies to persuade his audiences toward moral formation and ethical behavior. Extensively documented, engagingly written, and innovative in outlook, this book will help students and scholars attend more holistically to the rich textures of Pauline discourses."

"Building on his valuable 'Pauline trilogy' (Pastoral Ministry according to Paul, Moral Formation according to Paul, and The Church according to Paul), James W. Thompson helps Pauline scholars and students to see clearly how theology and rhetoric are inextricably connected in Paul. With clarity and verve Thompson's Apostle of Persuasion evinces that the telos of the apostle's theologizing and persuasion is the (trans)formation of Christ followers into their Lord's image and likeness. This learned, limpid volume is a crowning achievement of a senior scholar that will richly repay readers by helping them to integrate the theological and rhetorical elements of the apostle's occasional letters into a coherent, cogent whole."

"An incisive construal of the innovative rhetoric that emerges from Paul's use of persuasion in the service of theologically informed moral formation. Mature, sensible scholarship that yields a nuanced synthesis of Pauline thought."

"James Thompson has written an unprecedented book in which he declares that Paul wrote his letters so as to present a transformed people to Christ at the end. Paul's purpose was not so much to set out theological insight but to persuade believers from the foundation of theological commitments. Thompson insists that it is imperative to scrutinize the epistles from the standpoint of Greco-Roman rhetoric, and he assesses persuasion and theology in all the letters of Paul, both undisputed and disputed, focusing mainly on arrangement and invention. He addresses some of the major historical controversies in Pauline studies and employs many scholars as interlocutors. I recommend highly this exceptional study for upper-level courses in Pauline exegesis and theology."

"Thompson has uncovered natural bridges between the rhetorical and the theological study of Paul's letters. He carefully and persuasively demonstrates that Paul's rhetoric and theology are not separate objects for study but are in dialogue: Paul's argumentation is theologizing. Paul's prophetic call and the community traditions form the basic convictions of Paul's argumentation as he theologizes with his audiences to persuade them to be transformed into a sanctified people presentable to Christ. Rhetoricians and theologians will discover new common ground to explore after reading this book."